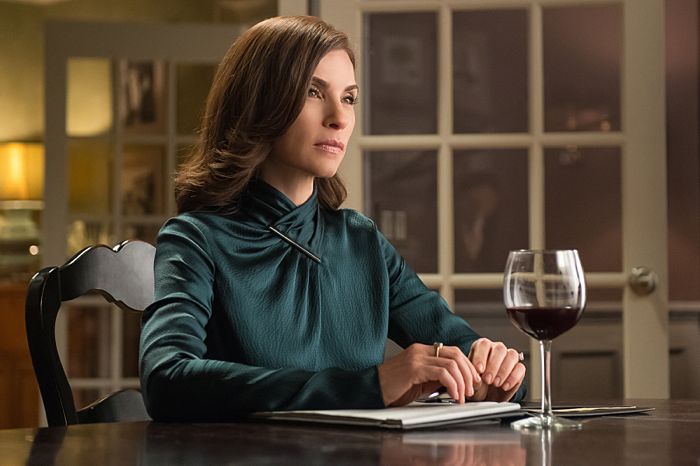 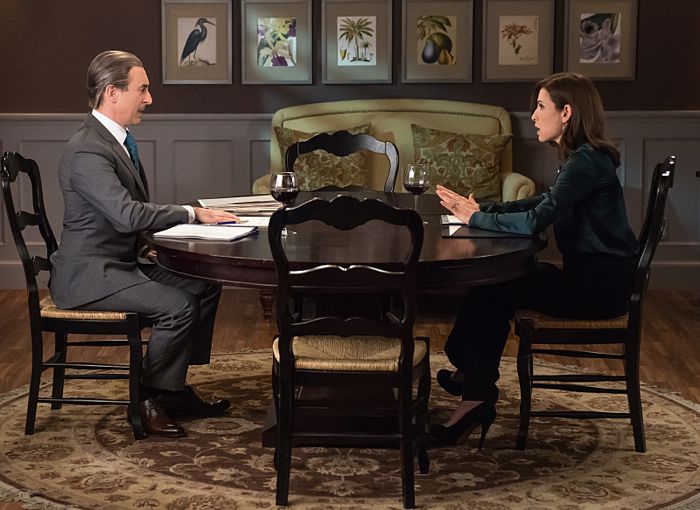 There are plenty of people in Alicia’s life that could spell trouble for her. Her mother, Veronica (Stockard Channing), isn’t the most put-together woman, and there is video of her spanking a (horrible, misbehaving) child. Alicia’s husband, Peter (Chris Noth), hasn’t always been faithful, and because their separation isn’t public, it’s quite likely that he is sleeping with someone and it will look like he’s cheating. We learn in “Oppo Research” he isn’t fooling around with his slutty intern, whom Eli takes great joy in firing, but Peter could be sleeping with the intern’s mother. These two will probably flare up with more issues as the story unfolds.

She also has a big problem with her son, Zach (Graham Phillips), who she learns had a secret abortion. Alicia is so furious at Zach that she essentially cuts him off, just asking him to support her in the media’s eye. We’ve never seen Alicia like this, though her anger is understandable, her son having been lying to her for quite awhile. Can she repair her relationship with Zach? He’s one with a track record of being trouble while thinking he’s doing the right thing, righteous stupidity. Combined with the now-chilly relationship, this can’t be good.

Alicia herself is by and large a good person. That’s why the name of the show is THE GOOD WIFE, and when considering her personally, there isn’t much dirt to dig up. She is moral, and while some may have a problem with her atheist leanings (a real life political landmine that shouldn’t be, in my opinion, being one myself), she does the right thing the vast majority of the time. Her slip ups are minor and average.

But even she does not escape the smear. Before even announces she’s entering the race, she is already set up for a DUI test (which she passes easily) in full front of the public eye, and stories about her alcoholism (which isn’t true; she isn’t an alcoholic) are spread. This goes to show that even someone as good as Alicia is at risk of being torn down during a campaign, a regrettable fact that only paints her opponent in a more negative light, which is saying something, since he’s already known to be total scum; the main reason Alicia is getting into politics is to keep him out of a position he doesn’t deserve.

The question I’m left wondering, and I’m sure it’s intentionally painted that way, is, is Finn (Matthew Goode) betraying Alicia? She is meeting him for a drink just before she is pulled over. Technically, he works for her opponent. While he claims that he wishes her nothing but the best and that their fights in court are merely a part of the job, what if he’s turned?

Now, I don’t really think that, of course, but you can be sure the thought will cross Alicia’s mind, and if not hers, than Elfman’s. This makes Finn look very bad. Thus far, Finn is painted only as a good guy on THE GOOD WIFE, and if he ends up being crooked, I will be very surprised. But the implication may be enough to stir up trouble.

And, of course, there’s Lemond Bishop (Mike Colter), a drug dealer that Alicia represents. She tried to fire him, and once he finds out why, he not only lets her, but forms a secret PAC to support her. Alicia has never liked Lemond and it’s likely she sees the campaign as a good excuse to be rid of him once and for her. His thwarting of her efforts, tying her even more firmly to him, will come back to hurt her in the end. It’s not Alicia’s fault she’s in this position, exactly, but I don’t see any way for her to come out of it smelling good.

So, with all of this in mind, should she run? It’s a little late to ask that, since she’s pulled the trigger, but I’m more divided now than ever. One wants to see her move up in life, and the arc ramped up on “Oppo Research” gives the show new ways to grow, exploring fresh plot avenues. Unfortunately, this is also a way more cruel game than Alicia is used to playing and I worry what might happen to her in the heat of battle. One thing is for sure, this will not be a boring year.

THE GOOD WIFE airs Sunday evenings on CBS around 9 p.m. ET. Air times may vary based on sports run-overs.