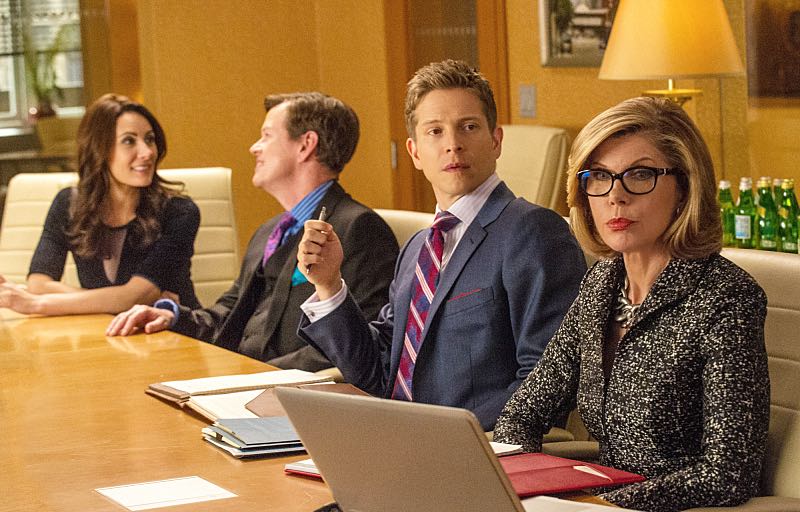 CBS’s THE GOOD WIFE returned from hiatus this week with “Dark Money.” Alicia (Julianna Margulies) faces the bad side of her campaign as she and Prady (David Hyde Pierce) compete for a big money donor. Meanwhile, Lemond Bishop (Mike Colter) cashes in his favor with Kalinda (Archie Panjabi), and Diane (Christine Baranski) and Cary (Matt Czuchry) defend Colin Sweeney (Dylan Baker) in a defamation lawsuit. Nothing huge happens in the mythology of the show, but it is another excellent installment.

Any episode with Colin Sweeney in it is most welcome, and when Baker gets to play dual roles, also portraying an actor hired to play a version of him in a TV show, well, that’s just icing on the cake. He is a supreme creep, the type of person one never wants to meet in real life, but the same eccentricities that make him a scary psychopath also help paint him as a fascinating television character.

This go ‘round, things start off with a prosecutor, Selma Krause (Julie White), trying to prove a show didn’t use Sweeney’s likeness, then morphs into yet another case of someone trying to show Sweeney killed his wife. With Sweeney’s current spouse, Renata (Laura Benanti), a woman as unpredictable and self-absorbed as her husband, tossed in as a wild card, there are many interesting back and forths as the case shakes out, each side taking a turn in the lead.

I don’t know if The Good Wife will ever see Sweeney convicted, but “Dark Money” is as close as the show has ever gone to saying he did it. Part of me wants Sweeney to get his just desserts, but part of me is glad he gets away with things because it’s our heroes who represent him.

Alicia has been getting in touch with her dark side, too, even as she tries to stay out of Sweeney’s business, a position he isn’t happy about. Instead, she meets with a Koch-brother-type, Guy Redmayne (Edward Asner), who wants to support her because he thinks Prady is gay and he doesn’t like “faggots.” In his own way, Redmayne is just as despicable as Sweeney, even if Redmayne has never killed anyone. Because Alicia has to deal with him, she is torn up inside, realizing the high cost she’s paying by going into politics.

I think Alicia will be able to live with herself, though. It’s true that she doesn’t like doing what she’s doing and she has a good cry afterwards, especially after Prady makes her sympathize with him again. However, this is all for a reason, and Alicia wants to win. Having come this far and knowing everyone else is just as deep in the mud, she feels this is the game she has signed on to play. Similar to being a lawyer, entering politics is impossible to do over any period of time with a clean soul.

Can she still be a good person, though, if she does bad things? Her daughter, Grace (Makenzie Vega), seems to think so, and I’m inclined to agree. People can’t be judged by every single action they take; they have to be considered as a whole person. Overall, Alicia does far more good than bad in this world.

The final of the trio of stories finds Kalinda tasked with playing chauffer to Bishop’s son, Dylan (Eric Ruffin). Bishop has his reasons for enlisting Kalinda and those play out, but that’s not nearly as interesting as the accidental circumstance Kalinda finds herself in when she sees a bully being mean to Dylan. Kalinda handles it, but Bishop finds out anyway.

Bishop is a scary dude, which is why Dylan doesn’t want Kalinda to tell his dad what happened. When faced with the situation, though, Bishop calmly calls the bully’s father and asks him to talk to his son. There are no threats, veiled or otherwise, and no physical punishment is dealt out. It’s frustrating to Bishop not to use every tool in his arsenal to protect his loved one, but he knows it’s better for his son if he shows restraint. He is many things, including a good father.

This doesn’t make Bishop a likeable character by any means. Like Redmayne and Sweeney, he isn’t someone you’d want to be friends with. Also like them, he’s rich. I think there’s a commentary to be noticed here about the trio of villains in “Dark Money” and how they tie into the stories of our main characters, who are not bad people.

“Dark Money” leaves the viewer with much to ponder, and in between serious moments, Marissa (Sarah Steele) drops in to lighten the mood. Plus, there’s a terrific West Wing reference. This is a recipe for a great television show, and I’m constantly amazed at how THE GOOD WIFE thrives on a boring network like CBS. Thankfully, the channel seems to let them do their thing their way.