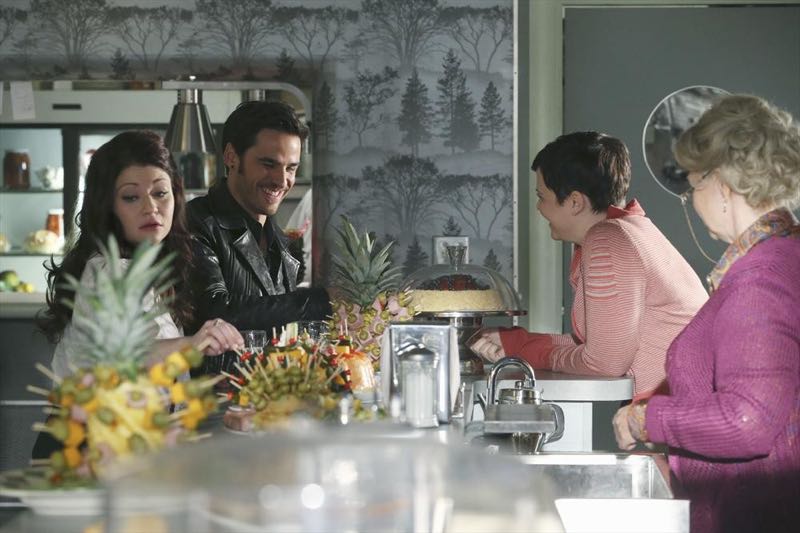 In this week’s episode of ABC’s ONCE UPON A TIME, there is “Darkness on the Edge of Town.” A down-on-his-luck Mr. Gold (Robert Carlyle) brings Ursula (Merrin Dungey) and Cruella De Vil (Victoria Smurfit) to the edge of Storybrooke with a plan to get them inside. If only our heroes weren’t such goodie-two-shoes, as a couple of them apparently aren’t, the hamlet might be safe. Alas, evil is allowed within the protective spell once more.

This is supposedly about the lowest Gold has ever been, yet he’s easily able to manipulate not just his cohorts’ way into Storybrooke, but his own as well. If this doesn’t give you an idea of how powerful and forward thinking the Dark One is, nothing will. He may look pathetic eating a cup of ramen noodles in Ursula’s sad apartment, but this is merely cosmetic. Gold is still very much a force to be reckoned with, and far from done with his plans.

I contend, though, that things go far too easily for Gold in “Darkness on the Edge of Town.” Gold is very intelligent, to be sure, but so is Belle (Emilie de Ravin), and he not only tricks her into releasing a demon on the town, he does so without anyone suspecting his spell. Then, while Emma (Jennifer Morrison) and Regina (Lana Parrilla) do have reason to think villains can be redeemed, they don’t question how convenient it is that two baddies who can stop the demon show up at just the right time to do so? Not to mention, after allowing Ursula and Cruella in with a magic scroll, our heroes don’t get this key back, allowing the women to sneak Gold in later. This all adds up to a pretty weak story.

Weak, uneven story has been the problem with ONCE UPON A TIME for at least the past year. Ever since the excellent Neverland arc ended, it seems the writers can’t quite manage to come up with a cohesive tale that makes sense. I am very interested in Gold’s past with these villains and how they ended up in the real world, but we need a framework that makes sense to get us there. Having coincidence and laziness move characters that are supposed to be the best of us is sloppy, and it’s hard to get into the story when this exists.

That being said, there are some cool teases in “Darkness at the Edge of Town.” Snow (Ginnifer Goodwin) and Charming (Josh Dallas) apparently have a past with Cruella and Ursula they don’t want exposed. This is intriguing because the pair are usually so good as to be boring. The few times their darkness has come out have been among the best moments for their characters. I’m anxious to see what their secret is this time.

Also, after the Blue Fairy (Keegan Connor Tracy) is rescued from the sorcerer’s hat, she speaks of the sorcerer and the author of the story book being two very different people. As has frequently been the case in ONCE UPON A TIME, Blue seems to know a lot more than she’s letting on. Given the importance of the author and how the show has been teasing his or her identity for awhile, it’s heartening to see this arc moving forward.

Lastly, Gold says that the heart with the darkest potential in Storybrooke is Emma, not Regina. Given just how bad Regina used to be, that’s hard to believe, but our Emma is certainly not as pure as Snow (he he), with her own checkered past. Emma’s use of magic has been slowly growing, and we’ve seen that magic can corrupt. Might Emma be reaching a tipping point where her soul is pulled towards the wrong path? That would be an interesting plot, if done right.

“Darkness at the Edge of Town” manages to be a pretty intriguing hour, despite the flaws in the central plot. The series certainly can’t afford to let every installment be this flimsy, but if it focuses on the established strengths it possesses, Once Upon A Time could get back to being great again in short order. There is enough good stuff here to build a half-season upon. The question is, will they?