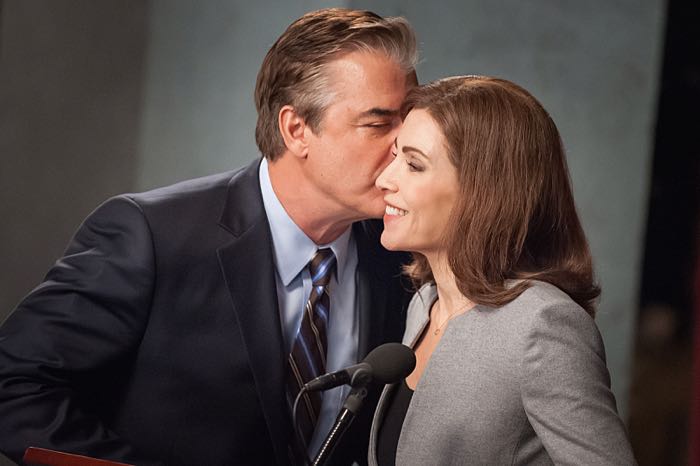 This week’s mid-season premiere of THE GOOD WIFE on CBS, titled “Hail Mary,” is a fine example of what the series does best: rollercoaster drama. It’s Cary’s (Matt Czuchry) last day of freedom, but as he prepares for prison, the firm scrambles with a last ditch effort to overturn his guilty plea. They find something, then it falls through, then they fake something, then they find something else, and the whole time Cary’s fate rests on the whims of one finicky judge, Richard Cuesta (David Paymer).

I love THE GOOD WIFE for exactly this type of episode. It’s emotionally draining, to be sure, but it’s so well-crafted that viewers won’t know the outcome until the end. We feel the characters’ ups and downs as they experience them, and the stakes are such that we care deeply about the outcome. Cary is one of the most likeable people on the show, and to see him go through this mess he doesn’t deserve… well, it’s rough.

On a side note, Alicia’s happy kiss with Johnny in “Hail Mary” is a fluke, right? She’s just happy because Cary is saved. Her real chemistry is with Finn, whose practice sparring could not be more charged, the polar opposite of the way Alicia coldly slays Peter. I like Johnny, but I just don’t see him and Alicia together. Double side note, I love watching Eli desperately cling to the almost-completely-disintegrated marriage of Alicia and Peter.

Anyway, when Judge Cuesta finally apologies to Cary and dismisses the charges against him, it’s a great relief to everyone watching at home. I doubt many thought Cary would spend the next two seasons behind bars. Then again, the show doesn’t like to let its characters stay stagnant, so you never know. Still, Cary crying and hugging his friends is moving, and we’re glad to see justice prevail.

“Hail Mary” completes one of the most interesting story arcs of the show thus far: an innocent man, a main character no less, suffering because of the flaws of the system and unlucky circumstance. Cary never did do anything wrong, but there’s no way to prove it for the longest time, and as it looks more and more certain that he will be locked up, it gets harder and harder to watch. Now to realize that what Cary, a character on a television show, goes through happens in real life, to real people with family and friends, it just tears at one’s soul. I hope something can be done to make things better for any individuals suffering a similar fate.

There will likely be repercussions from “Hail Mary.” Kalinda (Archie Panjabi) does find actual evidence to clear Cary’s name, but before that, she fakes some. It’s understandable why she does this. Kalinda will do anything for Cary, whether it be making a deal with the almost-literal devil, Lemond Bishop (Mike Colter), or showing up when Cary’s prison preper, Bill Kroft (Domenick Lombardozzi, The Wire), asks her to make a booty call to Cary. But forging evidence is crossing a serious line that will surely come back to haunt Kalinda. If she’s still alive to answer for it.

It has been publicized that season six will be Panjabi’s last on THE GOOD WIFE. That means the show needs a way to write Kalinda off. She and Cary have never been closer, really seeming in love with one another in a way they (or at least she) hasn’t been before. This makes it less likely she will choose a new career path, and more probably that she will be killed or jailed. Neither option is pretty, but both could make a heck of a good story, depending on what THE GOOD WIFE wants to do with her. Dream scenario: Lemond kills her and it spurs the firm to rally against him and shut him down once and for all, guilt hanging on the decisions made that led to this point.

Besides the major arcs, “Hail Mary” answers the prayers of those longing for the small moments of fun between the various excellent players on this show. From Johnny telling off Eli, to Geneva (Renee Elisa Goldsberry) calling out Diane for playing to Cuesta’s love of the dramatic, to Marissa (Sarah Steele) declaring she’s not Alicia’s fluffer, there are many, many scenes that beautifully illustrate the chemistry of the many recurring players seamlessly connected to our core crew. THE GOOD WIFE is an extremely realized world, and every moment in it is magic.

THE GOOD WIFE airs Sundays at 9 p.m. ET on CBS. And now that football is coming to a close for the season, it might actually get to air at the proper time every week!