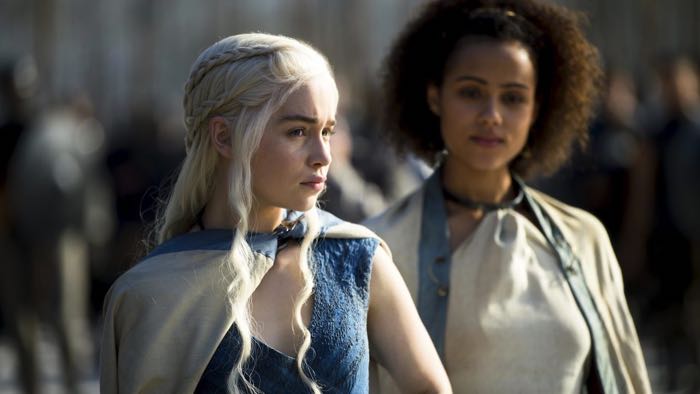 Television’s most prodigious series is coming to the world’s most immersive cinematic experience. On January 23, 2015, HBO will become the first television network to feature its programming in IMAX® theatres, showing two episodes from season four of Game of Thrones followed by the eagerly anticipated worldwide debut of an exclusively created sneak-peek trailer for IMAX of season five. The episodes will be digitally re-mastered into the immersive IMAX® format and will be released for an exclusive one-week engagement in upwards of 150 IMAX theatres across the country’s top markets through January 29. In coming days, fans can log onto www.imax.com  for screening information and to purchase tickets.

Game of Thrones has been hailed as “a masterpiece in the making” (Washington Post) and “the most epic, ambitious show on television” (Chicago Sun-Times).  “The cinematic brilliance and grand scope of the series is perfect for the IMAX format,” said Pamela Levine, chief marketing officer at HBO.  “We are always looking to provide fans with new and exciting ways to experience the show and viewing two key episodes, along with the new trailer, on such an impressive platform makes for a great event.”

“IMAX always seeks innovative ways to provide moviegoers a unique and differentiated experience and today’s partnership with HBO and Game of Thrones achieves just that,” said IMAX CEO Richard L. Gelfond. “This deal also furthers our efforts to offer exhibitors the opportunity to participate in alternative forms of content in a new and exciting way. As part of our broader strategy, we will continue to look for one-of-a-kind ways to provide consumers with special IMAX experiences.”

The IMAX® release of Game of Thrones will be digitally re-mastered into the image and sound quality of The IMAX Experience® with proprietary IMAX DMR® (Digital Re-mastering) technology. The crystal-clear images, coupled with IMAX’s customized theatre geometry and powerful digital audio, create a unique environment that will make audiences feel as if they are in the movie.

“We couldn’t think of a series more fitting than Game of Thrones to be the first presented in IMAX,” said Greg Foster, Senior Executive Vice President, IMAX Corp. and CEO of IMAX Entertainment. “The scope and production quality of the show is quite remarkable, which will be highlighted even further in select IMAX locations – allowing fans, as never before, to become a part of author George R. R. Martin’s world that David Benioff and D. B. Weiss created for HBO. It has the action, storyline and epic nature that our fans seek in IMAX and we’re thrilled to team with HBO and our longtime partners at Warner Brothers to offer audiences a chance to experience it in the ultimate theatre setting joined by other fans of the series.”