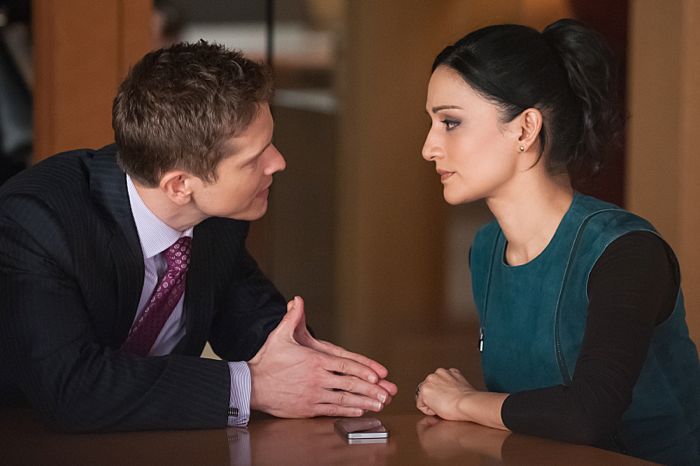 It’s finally the day of “The Trial” for Cary (Matt Czuchry) on CBS’s THE GOOD WIFE. Unfortunately for him, trials do not happen in a vacuum, and there are a number of exterior factors that affect various parties involved. Meanwhile, a joke note that Alicia (Julianna Margulies) writes ends up in the wrong hands, becoming a problem for her campaign. Will she compromise her morals to save it?

We all realize that judge, juries, and lawyers have lives outside of court, but rarely does a television show ever present those stories. THE GOOD WIFE chooses to do so here when the stakes are high. Judge Richard Cuesta (David Paymer) is trying to score Neil Diamond tickets for his anniversary. One juror (Zak Orth, Revolution), perhaps the one most sympathetic to Cary, has to read lips to understand what is being said. The prosecutor, Geneva Pine (Renee Elise Goldsberry), is watching her marriage fall apart because of an affair. None of these things should influence the trial, but they do.

It’s this level of authenticity and whole-world outlook that sets THE GOOD WIFE apart. Sure, Cary’s trial may not be the most convenient time for this to happen, but the truth is, it’s a factor in every single case. People are only human, and humans have messy lives with separate areas that bleed into one another. That’s no stopping that, so it’s nice to see it illustrated so nicely.

Interestingly, though, none of the elements mentioned above actually affect the outcome of the case. They all have the potential to do so, but they don’t, at least not in any meaningful way. The trial stands on the evidence presented, some factual, much circumstantial. But it’s what’s laid out for the jury to consider that matters most. So maybe THE GOOD WIFE is trying to show us that, even in a distracting world, justice can still be served.

Of course, Cary going back to jail is not justice. Viewers know this, Cary knows this, Cary’s friends know this. The judge and jury do not. The case against Cary is awful, and even when Kalinda (Archie Panjabi) finds a way to force the one witness who can help Cary, Dante (Mark Green), onto the stand, said witness is intimidated to lie, torpedoing Cary’s chances of being acquitted. It’s frustrating, but the jury could be completely forgiven for finding Cary guilty based solely on what is presented to them in court.

At the end of “The Trial,” Cary pleads guilty. We don’t see any further than that, and we’re left to assume Cary is going to prison for at least two years. I don’t think that’s what is happening, though, because THE GOOD WIFE can’t send away one of its best characters for such an extended period of time. What I am hoping is that Cary is taking the other deal, pleading guilty with time served in exchange for testifying against Lemond Bishop (Mike Colter). Cary is terrified of Bishop, and turning against him would not only endanger Cary’s life, but go against his ethical code as a lawyer.

The reason Cary might take the deal is for Kalinda. If no one stops Bishop, she is dead. Kalinda goes into Bishop’s home and threatens to have his son taken away. Kalinda is still alive because she took steps to protect herself in that moment. But Bishop didn’t give in to the blackmail and will come after her. Jailing Bishop is the only way to save Kalinda, and even that might not work because his reach is long.

It’s time for THE GOOD WIFE to have all of its characters turn against Bishop. Kalinda and Alicia need to step up and testify, too, supporting Cary. They need a strong enough case to put Bishop away for a long time. These characters uniting would be a grand, triumphant moment, reaffirming how much they care about each other, which we do see in several excellent moments in “The Trial,” and stopping a very bad man once and for all. It has to happen. Doesn’t it?

Alicia’s subplot is another example of the ridiculousness of politics. Alicia’s quote from a TV show, written down to make her daughter, Grace (Makenzie Vega), laugh, is accidentally shown to the wrong person and taken out of context. Then, a conniving teacher and principal leverage it to gain political favor. When they can’t get that from Alicia, they get it from Peter instead, which Alicia doesn’t like any better. This is a dirty, ugly business, and like the trial, it is just not fair.

It also provides yet another scene in which we can’t tell if Prady (David Hyde Pierce) is a jerk or not. He may not have intentionally attacked Alicia, but he refuses to walk comments back, which says something. He could offer to negate his words about school violence as they pertain to Alicia if Alicia denounces the homosexual rumors surrounding him. He doesn’t. I still don’t know if he genuinely wants the campaign to be clean, but he’s not giving it his all to keep it that way.

“The Trial” also has some good Alicia / Finn (Matthew Goode) stuff as they try to avoid getting romantic, and end up in a romantic cliché. Their being a couple is another thing that “has to happen,” and while the writers are finding authentic ways to delay the inevitable, fate seems determined to see them together.

This week’s installment is yet another example of how excellent THE GOOD WIFE can be, combining a plethora of great characters with brilliantly interweaving story. The plot is carefully constructed to keep things tense and allow surprises, and the story is very engaging. Well done.

THE GOOD WIFE airs Sundays at 9 p.m.-ish ET on CBS.