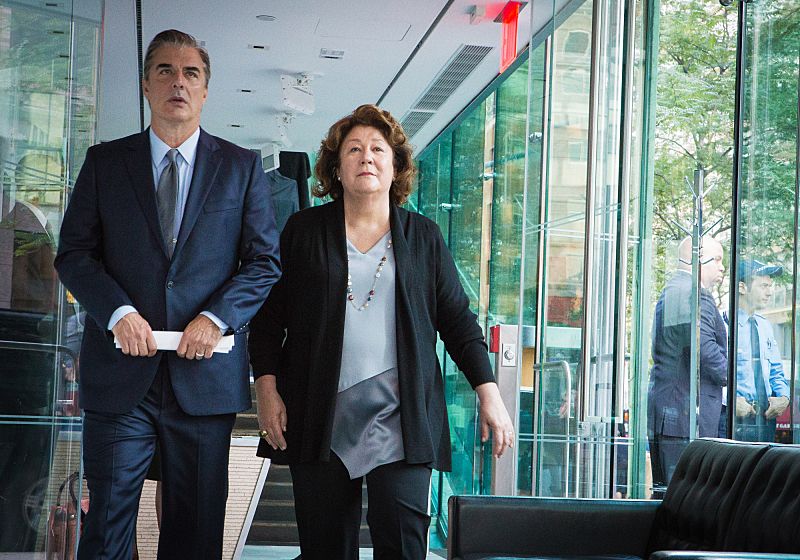 In the season premiere of THE GOOD WIFE on CBS, “Bond, “Alicia (Julianna Margulies) struggles to make it on her own as a lawyer, Cary (Matt Czuchry) struggles to connect with the young associates at Lockhart Agos, and Ruth Eastman (Margo Martindale) struggles to handle her candidate’s wife. Oh, and in one of the biggest shakeups ever in a show known for shakeups, that happens.

But is still feels surprising. Eli and Peter’s partnership is the one that doesn’t waver when everything else does. We’ve seen managing partners at law firms come and go, relationships fall apart, and a variety of people come in and out of the scene. What we’ve never seen is that strong “Bond” between Peter and Eli waver much. And now we not only have, but we’ve witnessed it disintegrate completely in the course of a single hour, leaving Eli bent on revenge against his former boss and best friend.

The fact that Eli essentially gives up and shuts down is understandable. His pain is felt in Cumming’s brilliant performance, and it makes sense for Eli to be thrown by this. His lamenting about being ‘the help’ is not accurate, but one can easily understand how he feels that way in the face of Peter’s chill. Thankfully, Eli is not a man that can be kept down, and with some support from Alicia, soon has a strategy to get back in the game.

Some might wonder why Alicia is so loyal to Eli. For those regular viewers, though, it shouldn’t be a mystery. Alicia is a loyal person, by and large, only betraying when she has to, and after being given good reason to do so. She didn’t like Eli at first, perhaps, but she has learned to respect him, as he has her. They have a great working relationship, and dare I say it, even an odd kind of friendship. That Alicia chooses to stand by Eli reinforces the “Bond” they share and rewards those who may have defended Eli in the past.

What Eli’s plan is, I have no idea, but I hope he wins.

That’s not because I don’t like Ruth Eastman. Sure, she’s a slippery political manipulator, but so is he. And I absolutely adore Martindale (The Americans, Justified, The Millers), who delivers her usual excellent performance in this role; the longer it takes Eli to defeat her, that happier I’ll be, and if they should team up to hurt Peter, even better. I just love Eli more, having watched him for years on THE GOOD WIFE, and he must triumph.

Alicia has business challenges, becoming a “Bond” lawyer to make ends meet. She continues to resists Louis Canning’s (Michael J. Fox) overtures, finds a way to work with prickly Judge Schakowsky (Christopher McDonald, Harry’s Law), and even makes a friend who will surely soon be a partner or employee, Lucca Quinn (Cush Jumbo, Getting On, Torchwood: Children of Earth). This plot is enjoyable but not particularly compelling because it’s easy to be confident Alicia will come out on top. What would be fascinating is if she takes Canning up on his offer, which it seems she’s inching closer to doing.

Alicia isn’t the only one with troubles, though, as Cary struggles to connect to the lawyers working under him. Cary is unique in the his firm because he’s the one young person in a group of much older people running the place. He can’t connect with those on his power level because he’s too different, and those that should be his peers are intimidated because he’s their boss. Like Alicia, I feel like Cary will find a way to get through, as he is tenacious, and Lockhart Agos can’t possibly change names again anytime soon. So I liked his sections, but don’t feel much suspense in them.

Those are the main points in “Bond.” I could actually write about ten pages were I to gush about all the wonderful moments, especially those involving guest stars Jane Curtin (Coneheads, Saturday Night Live, 3rd Rock from the Sun) and Mo Rocca (The Daily Show), among others, and courtroom showdowns, but I won’t. The above paragraphs hit the main points, and there will be plenty of time to talk about THE GOOD WIFE in the weekly columns I’ll write covering the show this year. Suffice it to say, “Bond” is a fantastic episode, and season seven promises to be on par with the first six years, which are overall very strong.