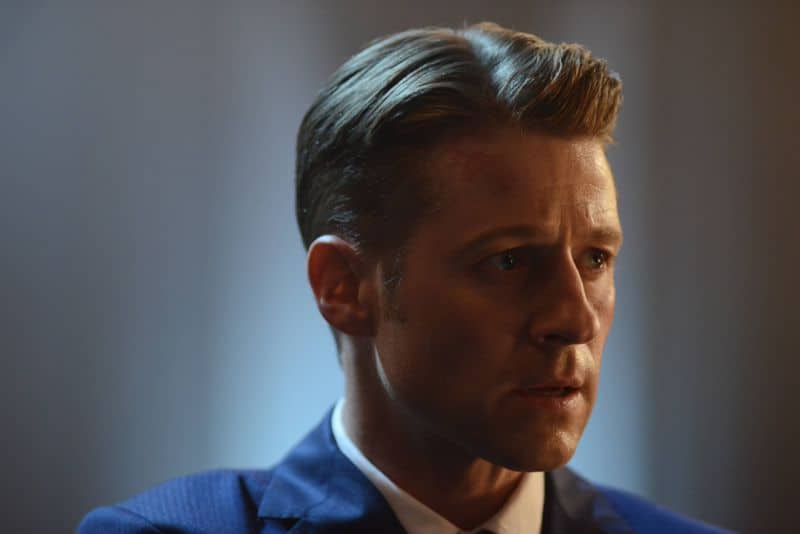 On this week’s GOTHAM, who has “The Last Laugh?” Well, no one yet, though we can say for certain a few people that do not. With the city getting darker and more dangerous by the minute, a hero steps up to save the day, but it’s not the person that the public thinks it is.

The hero is Bruce Wayne (David Mazouz). Still just a kid, he shows remarkable bravery when Alfred’s (Sean Pertwee) life is on the line. In past installments, Bruce cowers while Alfred protects him. In “The Laugh Laugh,” Bruce does allow Alfred to be the one to act, but he puts himself in the line of fire in order to give Alfred the opportunity to save everyone else. It may still be awhile before he’s Batman, but Bruce is strongly heading in that direction.

The citizens of Gotham, however, are likely to believe that Theo Galavan (James Frain) is the hero they’ve been waiting for, with Bruce overlooked as he almost always will be. That’s because no one knows that Theo sets himself up to rescue the hostages, and is pulling the strings of the villain, too. I’m not sure what Theo’s game is yet, but he’s playing it beautifully, fooling everyone that matters.

Barbara (Erin Richards) has certainly noticed. I do not know if she’s telling Lee (Morena Baccarin) the truth when she says she’ll soon be back with Jim Gordon (Ben McKenzie), but Barbara has to extract herself from a love triangle before she’s free for anyone else. At the start of “The Last Laugh,” she seems to be with Tabitha (Jessica Lucas), but after Theo’s big play, she switches which sibling she’s cozying up to. Is Barbara attracted to evil power? Or is she just enjoying herself and caught up in the moment?

Speaking of attraction, there is a great scene this week in which Alfred hits on Lee. I expected her to speak up and warn him off, but instead, she seems to enjoy the attention, at least to a point. But the fact that this flirtation gets Jim to mark his territory and results in a fun interchange where Alfred accuses Bruce of knowing Lee was taken makes the moment well worth it.

The only scene better than that is the one in which Harvey (Donal Logue) threatens Penguin (Robin Lord Taylor). Harvey is Jim’s friend, we know that, but I don’t think we’ve ever seen him act quite as selfless as he does here. Clearly, Jim has rubbed off on Harvey even more than appears obvious. That might be because Jim has been blurring the lines between good and bad himself, tossing people out windows to find Jerome, giving Harvey the clue that Jim might be tough enough to win after all. Whatever the reason, though, it’s nice to see the loyalty of the veteran detective.

The biggest thing to happen this week, though, is the death of Jerome (Cameron Monaghan). Both in the moment and upon reflection after, this seems a mistake. Sure, it allows for some fun puns and references in the dialogue of several players, but Jerome was such a great potential joker, it’s a shame to lose him! He resembles the legendary Batman villain enough that I’d taken to calling him The Joker in past reviews. To see him snuffed out so quickly is sad. The explanation the episode gives, that his behavior will spawn copycats, one of whom will actually be The Joker, feels cheap. I usually applaud the twists GOTHAM brings to the Batman legacy, but GOTHAM will be hard pressed to find a Joker as good as Monaghan. And if the one they do bring in ends up being inferior, it won’t be acceptable.

Still, even with the death of Jerome, “The Laugh Laugh” is a great, action-packed, enjoyable hour of television. There are plenty of things to keep fans engaged, and the performances continue to only get better. I look forward very much to what the series has in store next.