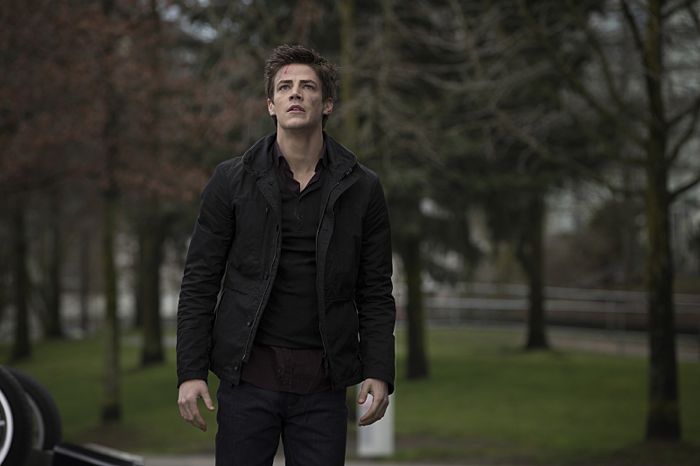 If you’re familiar with The CW series Arrow, you’re likely already aware of both the upcoming spin-off, THE FLASH, and its central character, Barry Allen (Grant Gustin, Glee), who will become the titular superhero. In Allen’s last appearance on Arrow, he is struck by lightning and ends up in a coma, where he has languished for months. So you may be wondering, how will THE FLASH begin?

Well, first we get scenes of Barry as a child, giving him the obligatory tragedy that all heroes must overcome. In Barry’s case, his mother (Michelle Harrison, Continuum) is killed and his father (John Wesley Shipp, Dawson’s Creek, 1990’s The Flash) is arrested as the culprit. Who killed Mrs. Allen is an unsolved mystery, surely designed to give the series somewhere to go.

We also get scenes of Barry on the day of the lightning strike, prior to slipping into his coma. This is important because it introduces us to several important people in his life, like Iris West (Candice Patton, The Game), Barry’s best friend, and her father, Detective Joe West (Jesse L. Martin, Rent, Law & Order), whom raised Barry. In this way, we get to see what Barry’s life is like before he is a hero. They couldn’t pick up in the present day because of the coma and still have this introduction, so it makes sense to show this flashback, though I wish the episode had started with 9 Months Ago, rather than confusing Arrow viewers until the 9 Months Later tag finally arrives onscreen.

Of course, the meat of the pilot is after the strike, as it must be. After all, Barry isn’t The Flash until that fateful event, and this episode is meant to introduce him as that character. It’s typical origin story balancing, getting the viewers to meet both the man and the myth at the same time, before moving on from there. THE FLASH does this pretty effectively.

Once turned, Barry finds his new team pretty quickly, much quicker than The Arrow did. There’s Caitlin Snow (Danielle Panabaker, Shark, The Crazies), who lost her fiancé in the storm, Cisco Ramon (newcomer Carlos Valdes), the tech guy, and Dr. Harrison Wells (Tom Cavanagh, Ed, The Following), who created the particle accelerator that caused all the problems. One of them has a surprising secret that the pilot doesn’t even begin to scratch the surface of, making for an interesting cliffhanger.

I kind of like the way Barry’s group is formed. It makes sense for this to happen early and all at once because of both the science in the premise and the way Barry turns. While Arrow’s secret is doled out slowly, The Flash is part of something greater than himself. The powers he gains may be personal, but they’re also part of a bigger problem for Central City, and can be used to help correct it.

This provides The Flash with plenty of villains right out of the gate. In the pilot, he faces one, but several others are hinted at, most notably an empty cage labeled ‘Grodd,’ one of The Flash’s most famous comic book rivals. More readily than other super hero shows, The Flash has a clear mission and a means to start working on it.

The pilot does a pretty good job setting all this up while still be entertaining, but it isn’t perfect. For instance, in the final showdown between The Flash and his first foe, good triumphs by doing something that doesn’t quite make sense. The physics are possible, I think, but the fact that the bad guy doesn’t just use his powers again right after he’s shut down is puzzling. It’s kind of weak sauce.S

Because THE FLASH is on the CW, it’s probably going to be an inferior product than Gotham or Marvel’s Agents of S.H.I.E.L.D. It’s D.C., so it doesn’t have that cohesive Marvel mindset going for it. It’s lighter than Smallville or Arrow, its network peers, which makes it easier to cross the line into cheesy territory. These are all serious things to consider as the series moves forward, as while I do like the initial installment, it could easily be the weakest of the crowded current superhero TV series lineup. Which doesn’t make it bad, but may allow potential viewers to overlook it.

THE FLASH premieres Tuesday, October 7th at 8 p.m. ET on The CW.