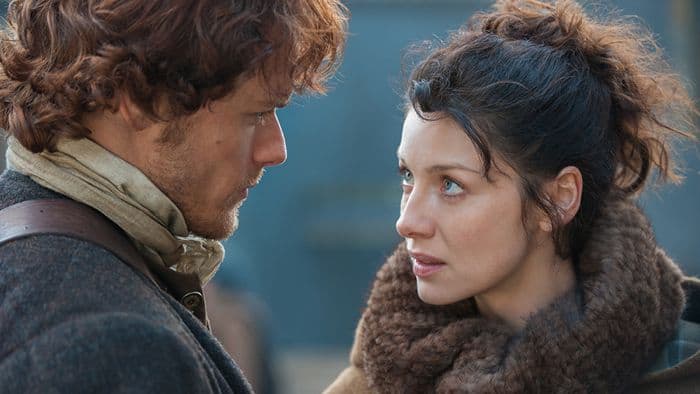 It is always a source of fascination and amusement when one discovers that two fan-favorite universes are so closely linked – for example, as with the curious case of OUTLANDER and DOCTOR.  At first glance, DOCTOR WHO and OUTLANDER would seem to have very little in common:  one is a historical romance book series and the other is a 50-year old science fiction television show.  But as the sci-fi universe stars aligned, the amazing ties between the two have become more and more evident.

Currently, the stars of DOCTOR WHO and OUTLANDER are played by Scotsmen: Sam Heughan and Peter Capaldi (originally from Galloway and Glasgow, respectively).  It is remarkable that the same year that DOCTOR WHO cast a Scotsman to take over the role of The Doctor is the same year that OUTLANDER cast a Scotsman as their lead actor as well.  (Noteworthy: DOCTOR WHO previously cast two other Scottish actors, David Tennant and Sylvester McCoy, in the role of The Doctor.)

While it makes sense to have cast a Scottish actor for OUTLANDER, as the series is set in Scotland and is being filmed on location there, for DOCTOR WHO, it is unusual because The Doctor is Gallifreyan. He is not even human.  He is from another planet entirely.

So the casting of two Scottish lead actors is just the first coincidence linking the universes of DOCTOR WHO and OUTLANDER.

As many die-hard fans are already aware, Diana Gabaldon has repeatedly admitted that she was inspired to create her OUTLANDER hero after seeing Frazer Hines’ portrayal of Jamie McCrimmon in DOCTOR WHO. In fact, Frazer Hines’ first appearance in DOCTOR WHO was in the episode entitled “The Highlanders,” where Jamie first met the Second Doctor (Patrick Troughton) at the Battle of Culloden in Scotland in 1746.  Thus, it was no surprise that after being inspired by Frazer Hines’ performance as Jamie in DOCTOR WHO, Diana Gabaldon chose to set her book series OUTLANDER around the same time period, just before the final Jacobite Uprising in 1745, and named her hero Jamie Fraser.

Given his obvious influence on OUTLANDER, and as a special nod to both fanbases, Frazer Hines has agreed to appear in the new Starz television series OUTLANDER where he will portray Sir Gordon Fletcher, the warden of the Scottish Wentworth Prison.  Look for his appearance in the second half of the first season of OUTLANDER, which will air in 2015.

Other than the coincidental names, it would appear that the two Captain Jacks have little in common.  In OUTLANDER, Captain Jack is the fiendish villain who enjoys sadistically tormenting and torturing anyone who comes across his path.  In DOCTOR WHO, Captain Jack is more of an enthusiastic lover and savior of everyone he encounters.  The one characteristic that may hold true of both Captain Jacks is that they seem to always have sex on the mind, but one savors it as something beautiful between consenting parties and the other uses it to dominate and humiliate his conquests.  So while OUTLANDER’s Captain Jack is a villain worthy of deep loathing and spine-shivering fear, DOCTOR WHO’s Captain Jack is welcomed more with shivers of delight.  So while there may be two Captain Jacks, only one has viewers cheering for him.

DOCTOR WHO and OUTLANDER also have deep sci-fi roots as they both are based on stories where time traveling is at the essence of their mythology.  In OUTLANDER, a young WWII nurse falls through a time portal, traveling from 1945 to 1743, where she has extraordinary adventures.  In DOCTOR WHO, a young Time Lord steals a time-machine and travels throughout space and time, also having grand adventures.

It is remarkable that both DOCTOR WHO and OUTLANDER are founded on the premise of a time-traveling doctor and a time-traveling nurse.  Actually, in DOCTOR WHO, The Doctor is actually not a medical doctor at all.  He is just called The Doctor.  That is simply his chosen name.  Yet, in OUTLANDER, the heroine is a World War II nurse who is treated like a medical doctor because of her ability to help the ill, injured and infirm.

Two time-travelers — one by choice and one by accident — both referred to as doctors and look upon to save lives, which they do willingly and without hesitation; one with needle and thread and the other with a sonic screwdriver.

Thus, when OUTLANDER premiered August 9th and DOCTOR WHO returned for Series 8 on August 23rd – both shows found themselves in the interesting position of airing during the same night and in the same timeslot, competing for potentially the same U.S. viewers.

It has been a tenacious race for viewers as DOCTOR WHO and OUTLANDER tried to carve out a piece of the ratings pie and claim U.S. viewers on Saturday nights.  At first, it seemed like DOCTOR WHO had the clear advantage due to its longevity.  But after their first night competing, something interesting began to happen:  DOCTOR WHO’s ratings began to slip and OUTLANDER’s ratings began to climb.  So much so, that in their fifth Saturday night competing, DOCTOR WHO pulled in only 1.04 million U.S. viewers and OUTLANDER successfully pulled in 1.2 million U.S. viewers – with OUTLANDER pulling ahead in the ratings for the first time. Also significant is that for their fifth competing Saturday night, OUTLANDER received 53,440 tweets and DOCTOR WHO received only 20,623 tweets.  Episode by episode, OUTLANDER seems to have pulled ahead in the race for ratings and social medial presence. Remarkable for such a new television series.

There are likely more amazing ties and coincidences shared by OUTLANDER and DOCTOR WHO, but these were the five that caught my attention.  Who could have ever have guessed that one day these two shows would grace our screens and capture our hearts so wholly?  Competing or not, they are surely linked forever by a twist of fate.