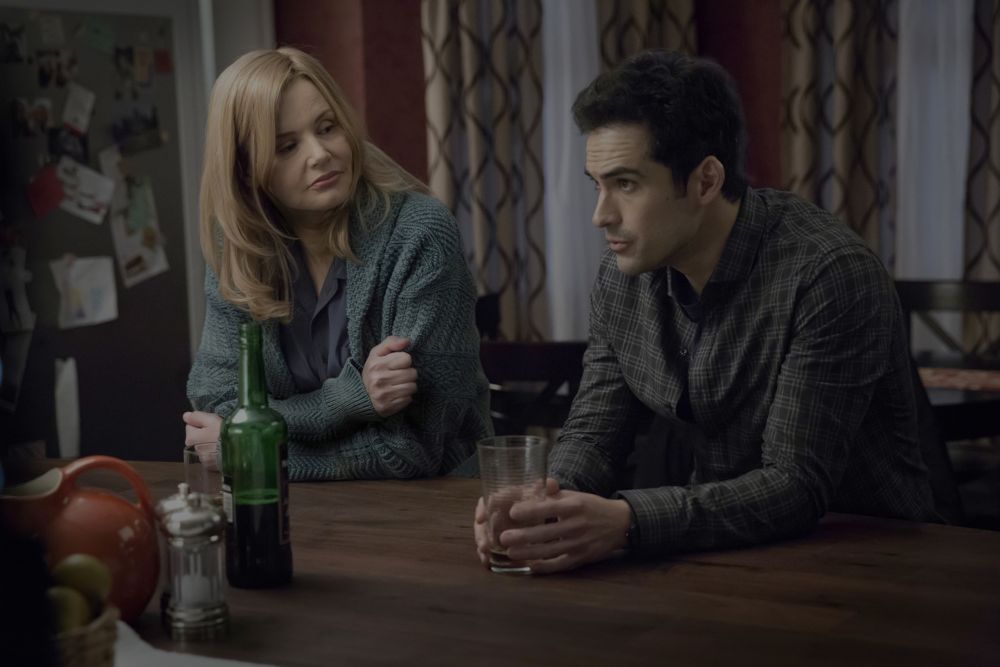 FOX continues its trend of adapting films into television (Lethal Weapon premiered earlier this week) with THE EXORCIST. Based on the film and book of the same name, though with fresh characters, THE EXORCIST follows Fathers Tomas Ortega and Marcus Keane as they investigate evil in the home of the Rance family. Can they repel the demons and bring light back into the house? Or will they become victims of a dark power?

The two priests, presumably our heroes, are very different people. Father Tomas Ortega (Alfonso Herrera, Sense8, El Equipo) is young and earnest and eager to help, but may lack the skills to do so. He’s also haunted by nightmares that could mean his soul is in danger. On the other hand, Father Marcus Keane (Ben Daniels, Flesh and Bone, House of Cards) is gruff with lots of life experience that has made him to want to withdraw from others. Which is too bad, because he’s probably the one the Rances need to defeat the demon.

The Rances have been through quite a lot already as THE EXORCIST begins. The father, Henry (Alan Ruck, Spin City), was in an accident that has left him pretty mentally gone and unable to really care for himself very well. Daughters Katherine (Brianne Howey, Horrible Bosses 2) and Cassey (Hannah Kasulka, The Fosters) deal with this at varying levels, one acting out, one being more understanding. This leaves matriarch Angela (Geena Davis, Grey’s Anatomy, Commander in Chief) to try to hold them all together, which she is struggling to do.

The series is a bit scary, but not overly so; this is broadcast television, you know. The gore is kept to a bare minimum, and swearing is pretty much nonexistent. What’s left is a drama that goes for something more underlying creepy than knock-your-socks off scary (by necessity), while trying to build a serial story with deeper mythology. Thank goodness this isn’t a case of the week, with the priests casting out new monsters every episode.

To be honest, I’ve had a very hard time critiquing this pilot. I hate The Exorcist movie, really hate it, and have never been able to get all the way through it. I did not enjoy the show at all for many of the same reasons, and despite my best efforts, kept allowing myself to be distracted and tuning out. This particular brand of horror does not appeal to be in the slightest, and while other programs in the genre have stood out and won me over, this one doesn’t. This makes it far from easy to pinpoint specific details that are good or bad, having managed to somehow mentally block out most of the hour already, and having no desire to ever see it again.

The general impression that I got was that it was decently made, but confusing. It wasn’t gripping or artistic like Hannibal (which is a movie I hated turned into a TV series I love), or full of rich characters like Bates Motel (loved both the movie and the show; see, I have some horror cred). It did look fairly well put together, with beautiful sets and the appropriate tone and style. But there also wasn’t anything that stood out as overly impressive or unique. The cast is fine. I’m not sure the writing was all that cohesive, given my inability to really identify the arcs other than the main one of the demon possession and the story of Henry.

I do think whatever is going on with Henry must be related to the demon. It has to be, right? And I’m sure the demon is actually there, as skeptical as everyone around Angela is of its existence, since that’s the basis of the story. I also imagine that future seasons will have to deal with future families, as surely that plot can’t be stretched out any further than a year.

I’m sorry, that’s about all I can tell you. If you like the movie and want to see the show, THE EXORCIST airs Friday, September 23rd on FOX.