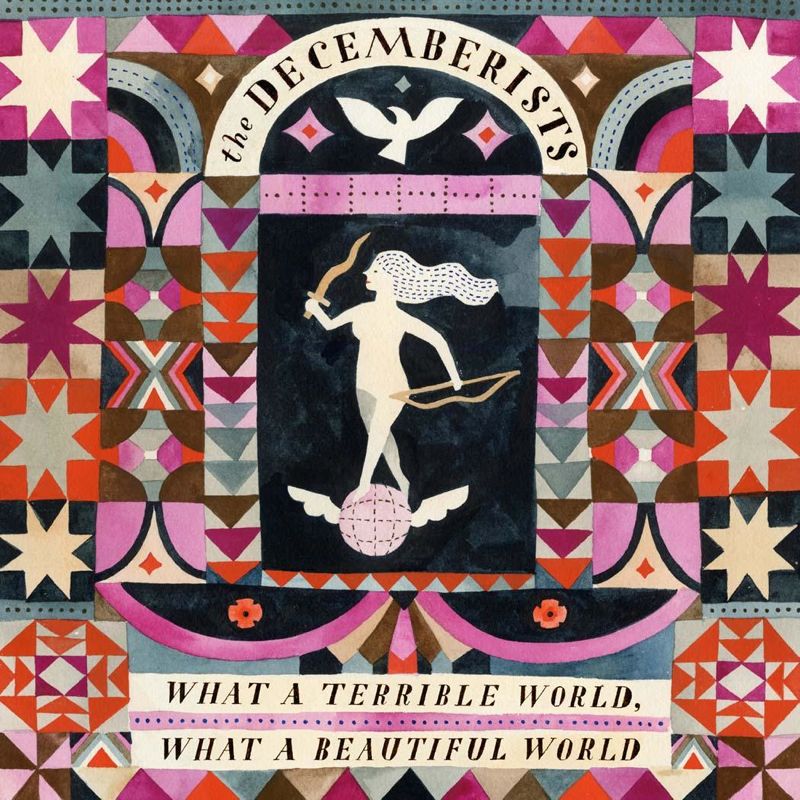 The Decemberists will release their seventh studio album, What a Terrible World, What a Beautiful World, on January 20, 2015 on Capitol Records. It will be released in the U.K. and Europe on Rough Trade Records the day prior — January 19. Produced by the band and long-time collaborator Tucker Martine (My Morning Jacket, Neko Case), it is The Decemberists’ first full-length studio album since 2011’s The King Is Dead, which debuted at No. 1 on the Billboard 200 and contained the GRAMMY®-nominated single “Down By The Water.”

“Make You Better,” the soaring, bittersweet first single from What A Terrible World, What A Beautiful World, is out today and available at all digital retailers. The track can be heard HERE.

The pre-order for What a Terrible World, What a Beautiful World launched today at thedecemberists.com, where an exclusive deluxe set and t-shirt bundles are available in addition to the album in all formats.  Those who pre-order the album here will receive “Make You Better” instantly plus a code for an exclusive ticket pre-sale of the band’s upcoming U.S. tour, which will be announced soon. Dates for The Decemberists’ European outing, which kicks off February 11, 2015 in Dublin, can be found below.

Fans who pre-order What a Terrible World, What a Beautiful World on iTunes iTunes.com/thedecemberists will also receive “Make You Better” immediately.

While officially on hiatus for the past few years, The Decemberists – comprising Colin Meloy, Chris Funk, Jenny Conlee, Nate Query and John Moen – nonetheless remained visible. The band released a live album, We All Raise Our Voices to the Air, contributed a song to The Hunger Games soundtrack, appeared in animated form on “The Simpsons” and performed on the season six finale of “Parks and Recreation.” Meloy, the group’s lead singer and principal songwriter, immersed himself in writing Under Wildwood and Wildwood Imperium, the second and third books of The Wildwood Chronicles, the best-selling middle-grade fantasy-adventure series that he created with his wife, illustrator Carson Ellis.

What a Terrible World, What a Beautiful World is The Decemberists’ most varied and dynamic work, both musically and emotionally. With their two most recent albums, The Hazards of Love and The King is Dead, the songs flowed out of an overall theme. Entering the studio in May 2013, The Decemberists reversed that approach.

“Typically we book four or five weeks in the studio and bang out the whole record,” explains Meloy. “This time, we started by just booking three days, and didn’t know what we would record. There was no direction or focus; we wanted to just see what would come out. We recorded ‘Lake Song’ on the first day, live, and then two more songs in those three days. And the spirit of that session informed everything that came after.”

The first songs were highly personal, a change from the strong narrative thrust that has characterized much of The Decemberists’ work. “Having a family, having kids, having this career, getting older – all of these things have made me look more inward,” says Meloy.

These reflections come to the foreground in “12/17/12,” a song he wrote after watching President Obama address the nation following the Newtown school shootings. “I was hit by a sense of helplessness, but also the message of ‘Hold your family close,’” recalls Meloy.  This bewildering, conflicted feeling came out in a phrase near the end of the song – “what a terrible world, what a beautiful world”—that gave the album its title.

The album’s narrative songs, including “Cavalry Captain” and “Carolina Low,” are imbued with increased subtlety and even a bit of levity. The sound of the album is also fuller and richer, inspired in part by Leonard Cohen’s 1977 collaboration with Phil Spector, Death of a Ladies’ Man. As The Decemberists remained committed to “letting the songs become themselves,” What a Terrible World, What a Beautiful World found its final form, a distillation of the best things about this remarkable band.

Track Listing – What A Terrible World, What A Beautiful World