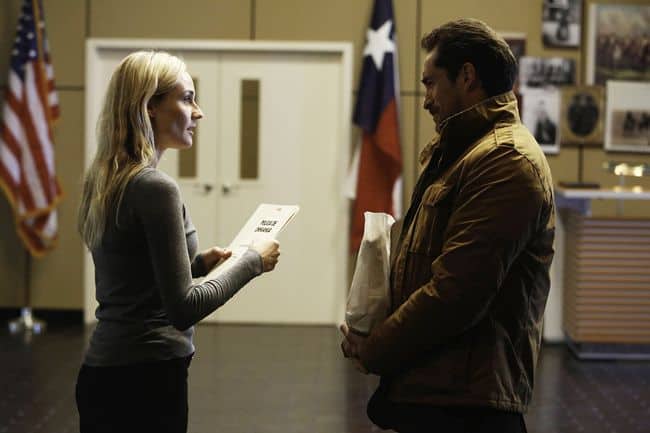 FX has a treat for summer viewers premiering this week. Titled THE BRIDGE, this latest serialized drama is a hybrid of Justified and The Killing. Loosely based on a Danish / Swedish show, THE BRIDGE follows American Detective Sonya Cross (Diane Kruger, Inglourious Basterds) and Mexican Detective Marco Ruiz (Demian Bichir, Weeds) as they investigate a serial killer after a body is found split in half on the border of their respective countries.

Kruger is brilliant as the impersonal officer with Asperger’s, stealing the show. She has great difficultly relating to people, and takes the rules and law completely literally, unable to even see why an exception should be made to let an ambulance cross the crime scene when it carries a man dying of a heart attack. Yet, Kruger plays the part with such earnestness and authenticity that she comes across as both believable and sympathetic. She is not defined by the condition, but it’s merely part of the larger, fully developed personality.

Asperger’s has been creeping onto television more and more in recent years, most notably in the NBC family drama Parenthood. What’s amazing is that, unlike in the past with other concepts, I can’t recall it being presented in a stereotypical or parody-like manner. Kruger is going to break new ground in expanding acknowledgment and understanding.

Setting the part in a police drama is great because Sonya’s skills both help and hinder her in her job. She is meticulous and detail-oriented, so she is likely to be very, very good at catching criminals. Yet, she has problems relating to others, so when she goes to deliver bad news to next of kin in the “Pilot,” we see her weaknesses laid bare. No matter how hard she tries, she can’t relate to others on the same level as most people, and that’s why she needs help. These are tasks she cannot avoid, and her department does not spare her this side of the job, meaning she has to find a way to make it work.

Enter Marco, who is all about the personal relationships. Marco, unlike most of his department, including his boss, is not beholden to criminals and has a strong moral compass. He is a beacon of hope for the struggling city of Juarez, hidden away in the thick smog of the corrupt. Marco does the best he can within the system, and clearly wishes he could operate in a similar manner as his El Paso counterparts.

Marco is the epitome of caring, and so quickly figures out what is going on with Sonya and latches on. I’m not sure if he sees something in her he likes, but he definitely appreciates what she brings to the table, and is attracted to her sense of justice. Together, they will balance each other out and be able to nab the bad guys.

Kruger will get all the attention because she has the character with the hook, but Bichir is every bit as vital to THE BRIDGE as she is. He has a presence that is more than just an interchangeable archetype, and he will control a great deal of the story, despite appearing to play second fiddle. It’s the manner in which Marco deals with Sonya that will define their partnership, and Bichir is very responsible for this element.

Now, the standard male-female partnership is prevalent across the crime genre. What makes THE BRIDGE different is that: a.) both characters are much more dynamic and fleshed out, b.) the show is about them at least as much as it is about the solving the case, and c.) the romantic tension is not played up. I’m not saying that there isn’t a connection between them, but like Holder and Linden on The Killing, that just isn’t the point of the show, unlike, say, Castle, which very much caters to the “will they, won’t they” between its leads.

Marco may just be what Sonya needs at work. Her mentor, Lieutenant Hank Wade (Ted Levine, Monk), who has advised her on all things emotional, is looking towards retirement. He can’t stick around forever, and has other considerations to think about besides Sonya. Sonya must have someone like Hank looking out for her, though, and so Marco may just be the substitute necessary at this time.

One of the best moments in the “Pilot” is when Hank breaks this news to Sonya. She takes it hard, and yet, without a lot of external reaction. We see the thoughts playing across Kruger’s face and the tears in her eyes, and yet she keeps her display within the character. We quickly realize this is about as bad as it gets for her, even showing more sadness here than when mentioning her dead sister. Sonya becomes a person in that scene, even to those who have trouble accessing the series through her until then.

There are also a couple of subplots going on. The aforementioned man in the ambulance dies, leaving his widow, Charlotte Millwright (Annabeth Gish, Brotherhood), whom he asks for a divorce for shortly before passing, to uncover his secrets. Presumably, there will be a connection between Charlotte’s husband and the dead bodies, but at this time, we do not know what it is. Also, a reporter named Daniel Frye (Matthew Lillard, Scooby-Doo), whom the cops strongly dislike, gets involved in a big way through no fault of his own, making for a heck of an exciting final act in this “Pilot.”

Basically, THE BRIDGE is a top notch, high quality crime drama, head and shoulders above what the broadcast networks deliver, in keeping with its FX and AMC peers. The cast is phenomenal and the writing is intelligent. It will likely be nominated for some awards, and many critics, this one included, will sing its praises. Don’t miss it.

THE BRIDGE premieres Wednesday at 10 p.m. ET on FX.