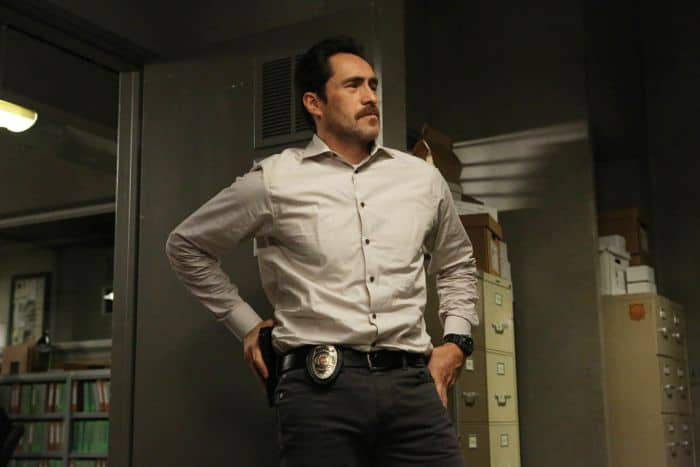 It’s a little weird to talk about this week’s episode of FX’s THE BRIDGE, entitled “Yankee,” as a season premiere. The major arc of the first year ends a bit early, and Detectives Sonya Cross (Diane Kruger) and Marco Ruiz (Demian Bichir) are already on to a new case hours before the season concludes. Thus, “Yankee” is a continuation of the story already in progress, rather than a fresh batch of subplots.

I like that, though. Life is not so segmented as most television shows seem to portray it, and the approach THE BRIDGE takes, keeping the narrative going without tying up all the threads at once, is more realistic. There are a lot of bad things happening near the U.S. / Mexico border, and Sonya and Marco are likely to investigate several of them, sometimes overlapping, as the show continues.

“Yankee” is a pretty typical hour of THE BRIDGE. Sonya is still having trouble understanding Marco (among other people), though she tries. Daniel Frye is still struggling with his alcoholism. Adriana’s (Emily Rios) sister is still missing. Hank (Ted Levine) still has sage wisdom to share. Charlotte (Annabeth Gish) is still working to come into her own as a criminal queenpin. There are still many missing girls. And something really brutal and bloody happens that viewers may not quite be expecting, not an uncommon occurrence. Basically, it is consistent in quality, tone, and structure with the other installments that have come before it.

Which is not to say that “Yankee” is without any season premiere hallmarks. While maintaining the ensemble from last year, this fresh episode brings a slew of new faces into the mix, each comfortably slipping in within the established framework. There’s: the chilling Eleanor Nacht (Franka Potente, Copper), who doles out harsh punishment for even the smallest slip up; Gary (Brian Baumgartner, The Office), the skeptical sponsor of Daniel Frye; Jack Dobbs (Nathan Phillips, The Saddle Club), the brother of the man who killed Sonya’s sister; DEA Agent Joe McKenzie (Abraham Benrubi, ER); and Sebastian Cerisola (Bruno Bichir, Demian’s brother), to name a few. Other episodes have introduced a new character or two, but it’s the number of arrivals here that make “Yankee” stand out just a bit.

The best part of THE BRIDGE is the gritty authenticity it uses to portray a certain area of the country. This is a place that many viewers will never have been, and there are quite a few differences in culture and action from elsewhere in the U.S. Heck, there are many variations whenever a character crosses from the United States to Mexico or back, two settings for the price of one. What’s most interesting, though, is the way the people who routinely slip back and forth interact with one another and their environment. It more than a culture clash, it’s a complete melding that is anything but consistent in makeup, leading to some personalities that must be quite versatile to cope.

THE BRIDGE can be a little boring from time to time. It’s not my favorite show on FX, and the pacing will often drag when jumping over to some of the less engaging side stories. This hurts the enjoyment factor, even though the inclusion of all of the different aspects are what fill out the world presented and make it seem so complex and layered.

However, it also has an excellent production and style, and is full of terrific performances. Kruger and Bichir stand out, of course, as the leads, but there is nary a weak link among those that surround them. Studying any one of the roles and how it is handled is sure to impress. In this, THE BRIDGE succeeds quite well.

THE BRIDGE airs Wednesdays at 10 p.m. ET on FX.