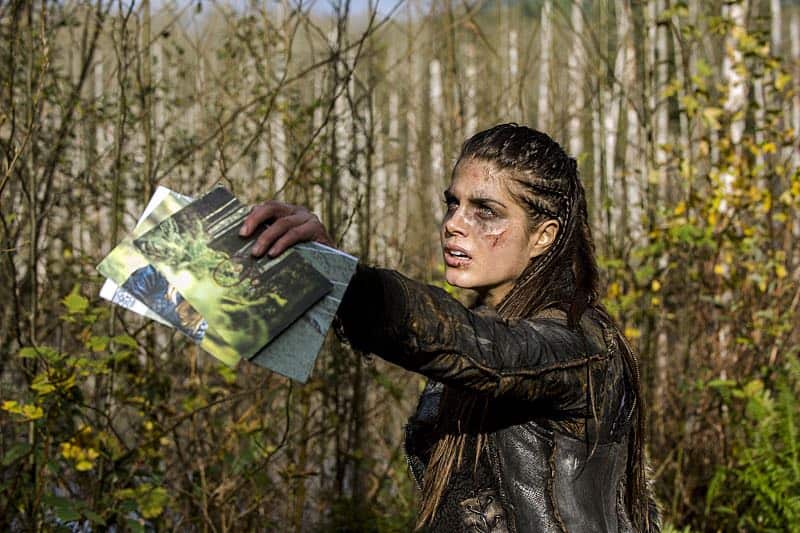 In the CW’s apocalyptic drama THE 100, everyone loses someone significant in their lives at one point or another, but one of the most painful losses was felt by Octavia when her beloved Lincoln (Ricky Whittle) was brutally  killed in front of her last season.  As portrayed phenomenally by Marie Avgeropoulos, Octavia’s grief embeds every fiber of her being and yet she does not crumble and break, it strengthens her and infuses her with an insatiable bloodlust. In a press interview from these, Marie previews Octavia’s blood-thirsty journey in Season 4.

It must be so much fun and rewarding as an actress since we’ve seen the young adolescent girl that was trapped underneath the floor that had to rely on other people to survive become the girl who learns to survive on her own and really develop into her own. How has that been for you?
MARIE: [Octavia’s] been a lot of fun to play, especially because I’ve learnt such random skills to use in my life, from riding horseback, which is not very useful in today’s society, but a lot of fun playing on TV.

Will we get any flashbacks for Octavia this year?
MARIE:   I don’t think so. We’re halfway through now and so far there has not been any. I hope so. Oh wait, no, we did do one this season! Sorry we’re halfway through. [Laughs] I have a good memory, but it’s short.  So there is some flashbacks.  Actually, you’re going to get to see a lot of the characters and how they interacted with one another. Pike was there as well. You could see his back story because he used to teach Earth skills to us on the Ark, so it’s a really interesting scene to see in how that develops.

Is Octavia going to be treated differently after she killed Pike?
MARIE:   I think everyone sort of knew, based on the Romeo and Juliet romance, that love was in Octavia and how significant that romance was to her. Everybody knew that. [Lincoln and Octavia] just kept making it such a mess — sacrifices for one another and fighting for their love. Once Pike executed Lincoln and she was there to watch the whole thing, I think everybody knew that would have a maximum impact which would come back on Pike — that the revenge and justice was coming in due time.

How deeply did killing Pike affect her? Do you think it changed Octavia as a person to do a revenge killing like that?
MARIE:  Yeah, Octavia’s never received any love from any men before, other than Bellamy, so to have such a love like that enter her life and leave so horrifically, it affected her in a negative way. I don’t know, the only way I can really relate it to is when people use substance abuse or alcohol abuse to deal with things that affect them in bad ways to numb their pain. Octavia does that by executing people and killing them and just using that as an out to not feel things. That’s her next drink, that’s her next drug. So when she does snap out of that, it’s a pretty awakening moment for Octavia and allows for some real soul-searching and grieving it again for a second time.

Do we see any Octavia and Roan [Zach McGowan] kind of working together a little bit this season?
MARIE:   Yes, you will see that happen this season. I can’t tell you if it’s in a positive or negative way, but you do see Octavia and Roan come together and form an alliance that maybe even becomes broken at one point too.  So you could see both sides of the story.

Octavia usually found herself kind of split between Skaicru and the Grounders. When the season begins, where is she going to find herself? Is she by herself or will she pick a side?
MARIE:  Octavia always sort of never really belonged with Skaicru or Trikru, she was just part of the hundred. I feel like she is more used to feeling alone and secluded and on her own. I think that’s when her mind is the clearest. She has such a different opinion on how things should be run and how alliances should be formed, and just on war specifically in Season 4 because of the fact her mind is so clouded with the devastation of Lincoln. A lot of points in the season, you just see her not thinking straight. She’s a very stubborn girl too, and just thinks her opinion, in that moment, is always the right one when that’s not always the case.

What can you say about some of the new tribes that are coming in, what her interactions might be with the some of the different factions this season?
MARIE:  Octavia has a pretty significant interaction with one of the male counterparts in a different tribe this season. I can’t tell you more than that, I’ll give it away. No one will ever replace Lincoln. Let’s just face it. So don’t freak out.

Will we get to see her interact with the glowing butterflies again?
MARIE:  I don’t think so. Not so far. But that would be fun.

To see who might be the new man in Octavia’s life and whether it will save her from her unrelenting path of vengeance, be sure to tune in for all new episodes of THE 100 when Season 4 premieres on Wednesday, February 1st 15 9:00 p.m. on the CW.