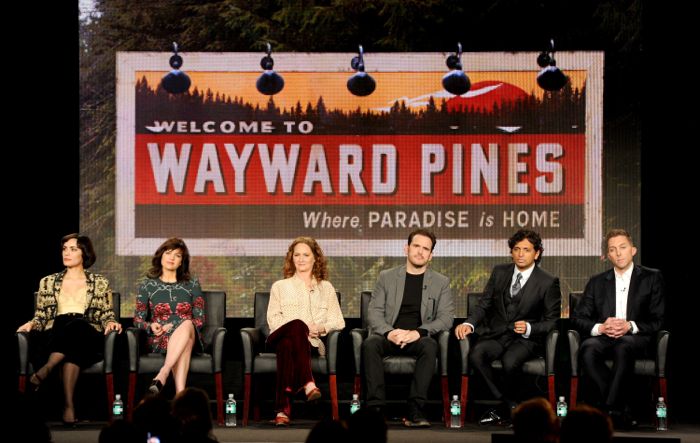 On Day 11 of the 16-day biannual Television Critic’s Association Winter 2015 Press Tour, Fox introduced its featured programming, and the following are quick takes of its new and returning series.

After the collapse in the ratings of “American Idol” and the failure to fully launch “X-Factor,” Fox is cautiously focused on rebuilding and rebranding their network.  As expected, Fox announced early Season 2 pick-ups for both “Gotham” and “Empire” and a Season 3 renewal for “Brooklyn Nine-Nine.”  Fox also announced that pleased to be moving forward with Ryan Muprhy’s “Scream Queens” starring Emma Roberts, Jamie Lee Curtis with the addition of new cast members Joe Manganiello, Lea Michele, Abigail Breslin, Keke Palmer and recurring guest cast Ariana Grande.  Fox’s Gary Newman noted that “you can build a campaign around someone like Shonda Rhimes, we want to be broad, inclusive, big, bold, risky, different.” Co-Chairman Dana Walden said that they are looking for, “showmanship of great quality and breakthrough shows that have cultural relevance.”

When asked about the fate of “24,” which returned in 2014 as a limited-run series, New stated that while Fox wants to do more “24,” although there are no current plans.  It also came out that if “24” does come back, it might be without its hero Jack Bauer and would focus on another rising hero.  Putting the final nail in the coffin for “Glee,” Newman said that while “clearly not a creative decisions, this one is long played out” and that “Glee” is ending at the right time.”  He also stated that he believes “Glee” will live on and will be introduced and seen by generations to come in digital libraries.  For those hoping for Simon Cowell and Paula Abdul’s return to “American Idol,” that does not seem to be on the horizon, but Fox is definitely in talks to work with both in the future.  Walden noted that Simon Cowell is a great showman and epitomizes showmanship since his shows work so well around the world.  Throwing a bone to the fans, Walden said that Fox very excited and looking forward to another season of “Bones” for 2015-16 season, but cannot formally announce anything until the contracts are done.  As to the fate of “Sleepy Hollow,” Newman said that they are cautiously awaiting more ratings data before determining whether to renew show for 2015-16 season, but they are excited about creative changes being pitched for Season 3 to make the show more episodic and less serialized.  (Observation: “Sleepy Hollow” is cautionary note for shows that de-romanticize their hero. Ratings crashed S2 when show saddled Ichabod with wife/son.  Hard to imagine that “Sleepy Hollow” can recover from the desexualization of Ichabod Crane, who was such a romantic hero in Season 1.  Nice to hear Fox is at least in talks with “Sleepy Hollow” producers to see if the show can be fixed soon enough to warrant Season 3 renewal.)

Another Fox show that faltered this season was “Red Band Society.”  Unfortunately, even after offering to run the show as a summer series, ABC Studios passed on the opportunity to produce more episodes.  Apparently, ABC Studios did not feel it was economically viable to continuing making the show if Fox was demanding a lower license fee for new episodes.   Then, in surprising news, Newman said that, “We have had some conversations on The X-Files,” which got everyone tremendously excited as stars David Duchovny and Gillian Anderson have been teasing fans for months about the possibility.  Newman also stated that Fox would bring “Prison Break” back in a heartbeat if given the chance, but that they have nothing to announce about that right now.  (Observation:  Clearly Fox paid attention to fact fans went nuts over casting of “Prison Break’s” Wentworth Miller and Dominic Purcell on “The Flash.”)

Coming Thursday, January is the new Fox drama “Backstrom,” based upon the books by Leif GW Persson and brought to television by “Bones” creator Hart Hanson.  “Backstrom” stars Rainn Wilson, Dennis Haysbert, Thomas Dekker and Kristoffer Polaha.   Showrunner Hart Hanson said that while in the books Backstrom has no redeeming qualities and was not even good detective that they changed it so that in the show Backstrom is actually very good at his job.  Humorously star Rainn Wilson said he signed on to the show because the variety of character colors and textures is not always something available for “pasty 48 year old white dudes.”  He provided the example of how Backstrom like takes credit for what other people do, which he noted is entirely human, frail, and interesting.  Rainn also explained that Backstrom has a corrosively dark world view — yet he lives in it just so he can get insight into the criminal element and the evil in their hearts just to understand what is driving them and motivating them. Executive producer Kevin Hooks added that we will see Backstrom’s vulnerability when he physically turns away from other characters and Rainn really brought that protective fragility to the character.  Hanson also explained that “Backstrom would love to be wrong with the way he sees the world and every time he gets it right, he’s shattered by it.” Then one new interesting addition to the story is the creation of Dennis Haysbert’s character, who was not in the books. Co-star Kristoffer Polaha complimented his co-star Dennis Haysbert because he portrayed an awesome Christian man that you do not usually see on network TV.  Co-star Thomas Dekker said that one of the twists to the show is that his character and Backstrom do not like each other, but they are living together, and that friction-filled dynamic provides for some great drama and provides an interesting lens to see Backstrom in his private world outside of the brash image he projects to those he works with.   For those interested in checking it out, Fox’s new series “Backstrom” premieres Thursday, January 22nd (after “American Idol”) (Observation:  I am unbelievably excited about Fox’s new series”Backstrom” as the show’s irreverence makes for hilarious, addictive show.   Unlike last year’s “Rake,” which starred Greg Kinnear, “Backstrom” with Rainn Wilson looks more funny, along the lines of “House.”  Humor is one of those ingredients that can really elevate a TV show and I am glad they are using more of it for “Backstrom.”  It should be noted that Thursdays at 9 pm is about to be a crazy, insane timeslot with “Backstrom,” “Scandal,” “Reign” and “The Blacklist” all competing.)

“Last Man On Earth” is Fox’s new comedy series set in the year 2022, featuring literally the last man on Earth after a virus kills off everyone else.  It hilariously depicts what someone would do if there were no one else around — anywhere — where you could do anything in a planet echoing in silence.  Starring Will Forte, the show focus as a man searching for something, anything to do when he is left alone to roam as he pleases.  Executive producers Phil Lord and Chris Miller promise that the show is not just about a man who blows things up and random destroys anything he can and that the show will try to peep through the prism of loneliness of this man who seeks eating in his life and tries to find something to do with all the time on his hands. Joining the cast are Kristen Schaal and Mary Steenburgen, who will portray characters that may be used in flashbacks or hallucinations so that Forte’s character has someone to interact with and is not just wandering around alone in scenes.  “Last Man On Earth” premieres Sunday, March 1st on Fox.  (Observation:  “Last Man On Earth” may have won me over with their liberal use of “visual whimsy.”  Comedy that pulls at the heart-strings and invokes some poignancy is much more interesting to watch.)

“Wayward Pines”, as described by Dana Walden, as a beautiful, suspenseful series is the centerpiece for Fox’s summer 2015 slate. Designed to be a limited-run series and helmed by M. Night Shyamalan, “Wayward Pines” will offer a fun, thriller ride for the summer.  The “Wayward Pines” books by Blake Crouch inspired the event series, but TV version does not stick exclusively to the story in books, such as Carla Gugino’s character is much different in the show than in the book. Also starring in the bizarre “Wayward Pines” world are Matt Dillon, Shannyn Sossamon, Juliette Lewis, Melissa Leo.  The show explores the story of a man lured to a town where everyone is trapped in a real-life nightmare and there are cameras watching everyone, everywhere.  Is this is a game or some twisted thriller where there is an evil mastermind out to kill off the characters one by one?  Intend to be a limited-run series, “Wayward Pines” was written as a 10-episode mystery story, so there will be a definitive end to the story in episode 10.  Though if well-received, the producers will continue the show as an anthology series, meaning new cast of characters if the show is picked up for a second season. Fox’s “Wayward Pines” premieres Thursday, May 14th. Perfect summer TV. (Observation:  As freaky as the show first seems, as with any M. Night Shyamalan series, there is sure to be a cool twist in the show that restores our faith in humanity — at least that is the hope.)

That is a wrap on Day 11 at TCA Winter 2015 and a wrap on this television press tour.  In July, look for more upcoming snapshots from TCA Summer 2015 on the new shows and TV specials coming up in Fall 2015 here at Seat42F.com.