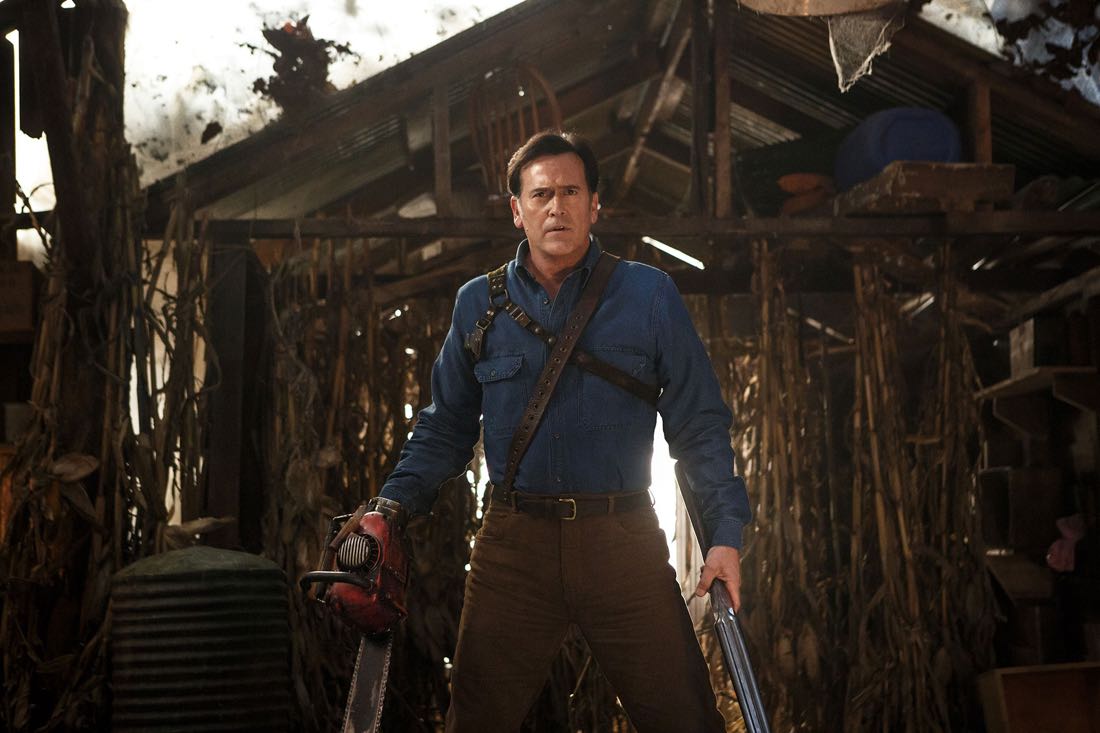 This Summer’s TCA tour included presentations from Ovation, Starz, TV One, ID and Animal Planet, Discovery, who presented on the sixth day of the tour. Here are some of the featured television shows and specials that caught our attention:

Starz president Chris Albrecht boasted that Starz is now #2 in subscribers in premium cable. [Note: I assume he means after HBO and not counting Amazon and Netflix.] He credited Starz making its app available to consumers and viewers, who cannot afford or who have chosen to cut-the-cable-cord since there are income brackets that might be challenged buying Starz through cable due to high cable fees, as the key to that growth. Starz is making strides in increasing its subscriber base by making its internet app available as alternative and affordable option.

Albrecht was just as dismayed as fans that OUTLANDER did not receive more Emmy nominations this year and candidly admitted: “I don’t think [it] will ever break through with [Emmy voters].” In spite of the lack of Emmy and other award recognition and love, he said that Starz intends to keep OUTLANDER around for a long time and it has committed to OUTLANDER through book four. He cheekily said that he would talk book five after he has read it. He was, however, lavish in praising the show by saying: “OUTLANDER is gonna be around for a while — we could not be more proud of the show.” He also noted: “Talent is the valuable currency in this business.” So there is no way he is letting the immensely talented folks working on OUTLANDER get away.

As a nod to the passionate fans of both OUTLANDER and POWER, Albrecht said that Starz believes in “for all fan-kind” strategy when it considers which series to greenlights and renew, as a a strong fan-base can be highly influential in this era of social media.

Briefly commenting on POWER move from Saturdays to Sundays, Albrecht said that Starz views the shift to Sunday nights a success and announced that Starz will be launching and airing all its new shows on Sundays.

Season 4 will be final season of BLACK SAILS.
Developing DIRTY GIRLS SOCIAL CLUB, based on novel by Alisa Valdez.
Development of a superhero drama entitled TOMORROW, TODAY with 50 Cent.
POWER had previously received 2 season renewal.
THE GIRLFRIEND EXPERIENCE renewed for Season 2 and will be an anthology series with new characters each season.
HAVANA QUARTET is still in play at Starz and another season under consideration. If Season 2 goes forward, it may film in Cuba.
ASH VS. EVIL DEAD promised to return bloodier and better this season. Lee Majors joins the cast in Season 2 as Bruce Campbell’s character’s dad and Season 2 premieres October 2, 2016.
POWER Season 3 theme is: “Be careful what you wish for” as there are dark times ahead for the characters.

The same clip previewed at San Diego Comic-Con was shared and Bryan Fuller along with Michael Green appeared to talk about the show. They clarified that the show is expanding some the female characters from the book in order to give the show more gender balance. In fact, one of the female characters most fleshed out is Laura Moon and an entire episode is actually shown from her point of view. They also promised that all the book stuff fans loved will be included in the show. When asked about the casting of Dane Cook,they said it was because he could be “a really entertaining dick.” As for Ricky Whittle, who portrays Shadow Moon, it was ruefully admitted that he had to audition 16 times for the role. As to casting Gillian Anderson, Bryan Fuller said he just called her up and asked her how she felt about the show. He further said that the door is always open on any of Bryan’s projects for her to join and he was ecstatic that Gillian wanted to join for AMERICAN GODS. (Impression: Too soon to tell, but I certainly am interested in checking the show ou.) Currently, no premiere date has yet been announced for Season 1 of AMERICAN GODS, but should premiere in 2017.

In 1682, King Louis XIV created a power center in Versailles that the rest of the world bowed down before. In VERSAILLES, Ovation’s ambitious tale of power, lust, and love, the show focuses on a love triangle between King Louie, his brother Prince Philippe and Philippe’s wife Henriette — a triangle that is complicated by the fact that Prince Philippe was also an openly accepted bisexual who like to cross-dress. Their complicated and intertwined lives paralleled the labyrinthine political world that Louis and Philippe conquered and ruled ruthlessly. VERSAILLES stars George Blagden and Alexander Vlahos and Louis and Philippe, and Noemle as Henriette. Astoundingly, the series was filmed on location in Versailles with the permission and consent of the French government. (Impression: Love the casting and costuming, but will have to see a bit of the show to actually see if the story holds up.) The 10-episode Season 1 of VERSAILLES premieres October 1, 2016 on Ovation.

With the skyrocketing success of African-American programming, like Fox’s EMPIRE, Starz’s POWER and SURVIVOR’S REMORSE, WGN’s UNDERGROUND, and BET and OWN’s original programming, TV One is also riding the wave of rapid increase of its viewership. In order to meet the demand for content, TV One is offering two new films: “Ringside,” which premieres September 4, 2016 starring Tyler Lepley, Allen Maldonado, Jackie Long, Sevyn Streeter and Raney Branch; and “Media,” which premieres in January 2017 starring Penny Johnson Jerald, Brian White, Gary Dourdan, Pooch Hall, Stephen Bishop, Finesse Mitchell, Denise Boutte and which could serve as a possible backdoor pilot for a TV series. (Impression: Boxing is not my thing, but I am interested in checking out “Media,” which looks great. Plus, I have a soft spot for Penny Johnson Jerald as longtime admirer of her work in TV shows such as Fox’s 24 and ABC’s CASTLE.)

It was announced that James Patterson will executive produce a new series of true crime stories that will air on ID, as well as released as BookShots, and written by him.

“Southwest of Salem” is a documentary film about the true story of four lesbian women 20 years ago who convicted of child molestation and how they have fought to be exonerated and their names cleared — especially after one of the victims fully recanted her testimony in 2012. The Innocence Project of Texas has been steadfastly working with the four women and had some success, but the long process continues as they repeatedly petition the court system for justice. (Impression: Miscarriages of justice unfortunately happen all the time. But it is hard for the media or even the public to second-guess a case that the legal system has ruled on and the avenues of appeal have been exhausted.) “Southwest of Salem” premieres October 15, 2016.

QUEEN SUGAR will air “ad-free” Director’s Cut on September 6, 2016 and Season 2 renewal was announced prior to its premiere.
GREENLEAF Season 1 will air a total of 13 episodes and Season 2’s episode order has been increased by three episodes, which now brings it to 16 episodes total.

“Toucan Nation” is the new Animal Planet film that showcases the global movement to end animal cruelty after a Costa Rican toucan named Grecia is abused. The film premieres August 24, 2016.

“Million Dollar Duck” is an Animal Planet film about the annual art contest to have a duck portrait put on U.S. stamps, a portion of the proceeds goes towards wildlife and wetlands preservation. It generates approximately $25 million of funds each year used to pay for those wildlife parks and sanctuaries. “Million Dollar Duck” premieres September 14, 2016.

Discovery’s DEADLIEST CATCH’s gets its own spinoff, DUNGEON’S COVE, which has been ordered to series.

“Harley & The Davidsons” is based on the true story of Bill Harley, Walter Davidson and Arthur Davidson who went on to create the Harley Davidson motorcycle empire. Discovery Channel is excited to present as its first scripted series “Harley & The Davidsons,” which falls perfectly in its wheelhouse with a combination of science, tech, history, exploration. (Impression: With Michael Huisman and Wilson Bethel co-starring, ORPHAN BLACK and HART OF DIXIE fans may be interested in tuning in and I assume motorcycle enthusiasts will already be tuning in to see the amazing bikes.) “Harley & The Davidsons” premieres September 5, 2016 and the 3-night mini-series airs September 5-7, 2016.

That’s a wrap on the network and studio presentations from Day 6 of the Summer 2016 Television Critics Association Tour. As a reminder: be sure to mark your calendars for the upcoming new series and specials as you do not want to miss out on the next great TV show that everyone will be talking about.