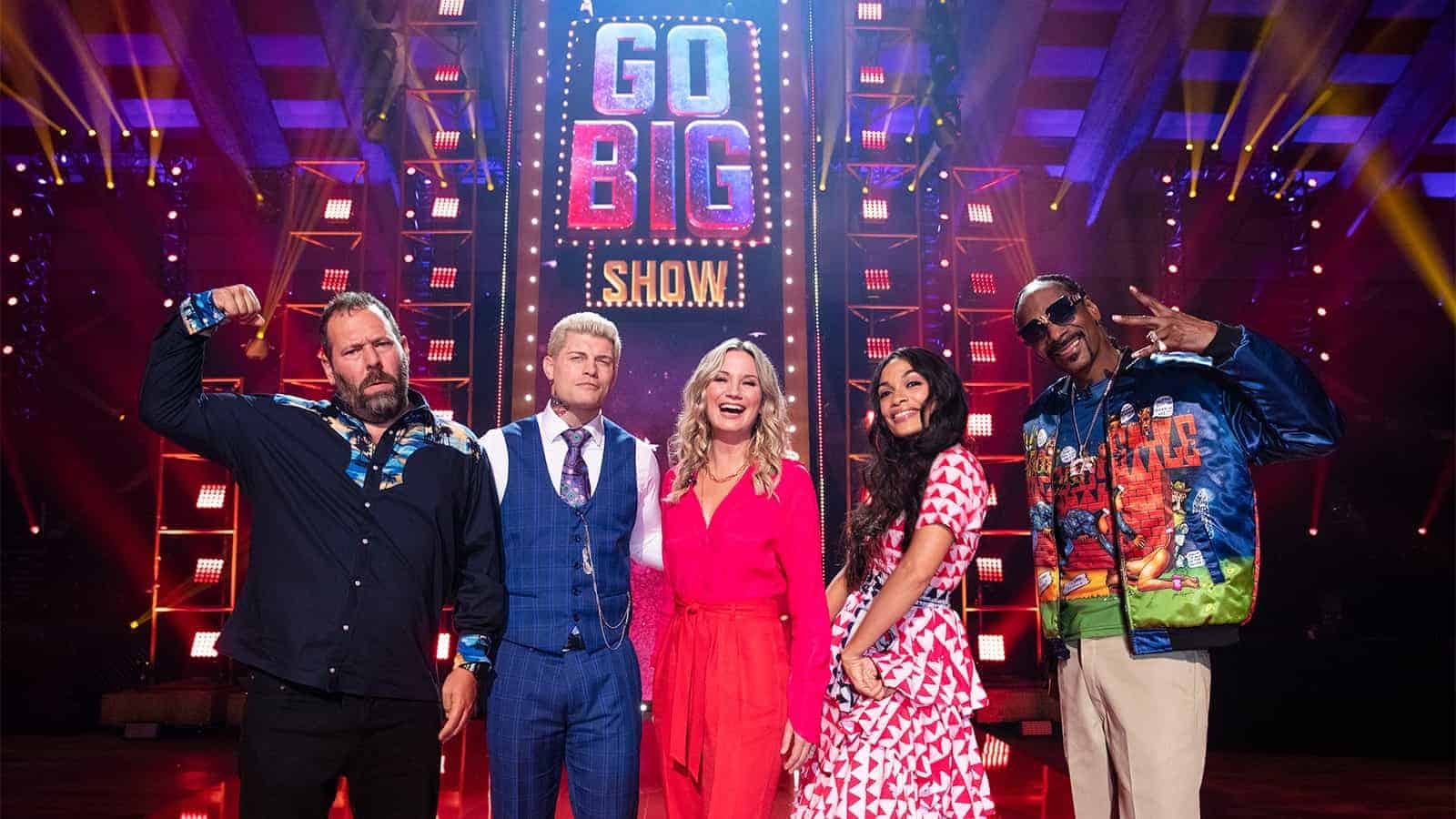 The 10-episode, hour-long series will go bigger next season and feature some of the most extreme and death defying acts from around the country. “Go-Big Show” currently ranks as the #3 Cable Comedy, reaching more than 34 million viewers.

“Go-Big Show” showcases supersized talents on a scale never before seen on television. The debut season featured monster trucks, alligator trainers, stunt archery and other radical feats; the program celebrates daring acts alongside personal, behind-the-scenes stories from the challengers as they battle head-to-head to impress the judges and advance toward the finale’s ultimate $100,000 prize.

“When you find a show and personalities that come together so authentically and bring joy and wow to an audience, you go big with your commitment to it,” said Brett Weitz, General Manager, TBS, TNT and truTV. “Viewers turned in week after week to see both what amazing acts our contestants could perform and what our judges reactions would be.  We are committed to bringing this type of television to our fans for years to come.”

“DJ Khaled is a larger than life personality, so of course Khaled was our only option to go even bigger this season,” said Corie Henson, EVP and head of unscripted programming for TBS, TNT and truTV. “His energy is absolutely infectious and authentic. These contestants are the very best at what they do, and no one understands that kind of passion better than Khaled.”

DJ Khaled is a multiplatinum artist, music industry visionary, innovative influencer, mogul, and mega-producer. He has achieved dozens of multiplatinum and gold certifications, including the sextuple-platinum Billboard Hot 100 #1 “I’m The One” [feat. Justin Bieber, Quavo, Chance the Rapper, & Lil Wayne], quadruple-platinum “Wild Thoughts” [feat. Rihanna & Bryson Tiller], and double-platinum “No Brainer” [feat. Justin Bieber, Chance the Rapper, & Quavo]. The latter propelled his 2019 album, “Father of Asahd” [We The Best Music Group/Epic Records], to the top of the charts. Not only did it garner a platinum certification, but it also became his third consecutive Top 2 debut on the Billboard Top 200 and emerged as the “#1 Most-Streamed Record” upon release. To date, he has moved 20 million singles and 6 million albums in addition to gathering 4 billion-plus streams. Additionally,he joined Will Smith and Martin Lawrence for the #1 box office smash “Bad Boys For Life” and took the stage at GRAMMY® Awards where he appeared during the emotionally charged Nipsey Hussle Tribute and received his first-ever honor in the category of “Best Rap/Sung Performance” for “Higher” [feat. Nipsey Hussle & John Legend].

About Propagate
Founded in 2015 by Ben Silverman and Howard Owens, who pioneered the global format business in the late 1990s, Propagate has offices in Los Angeles, New York and Paris. Its recent credits include the Emmy-nominated “Hillary” that premiered at Sundance and Berlin and now streams on Hulu, the recently aired “Notre Dame: Our Lady of Paris” on ABC and “Go-Big Show” on TBS, and the upcoming American adaptation of The Eurovision Song Contest, as well as the unscripted “November 13: Attack on Paris” “Haunted” and “Prank Encounters” for Netflix, and “In Search Of” and “Kings of Pain” for the History Channel. In scripted, “Blood and Treasure” and “Broke” for CBS, “Charmed” for The CW, the recently aired election-themed puppet special on Fox, “Let’s Be Real” and the upcoming “Zorro” television series for NBC. Propagate also created and produced the podcast, “An Oral History of The Office” for Spotify. Propagate’s expanding portfolio of companies includes Electus (“You vs. Wild”, “Running Wild With Bear Grylls,” “Jane the Virgin,” “Fashion Star”), Big Breakfast (“Adam Ruins Everything”, “Hot Date”), Notional (“Chopped” franchise), and talent management firms Artists First, Authentic Talent & Literary Management and Select Management.