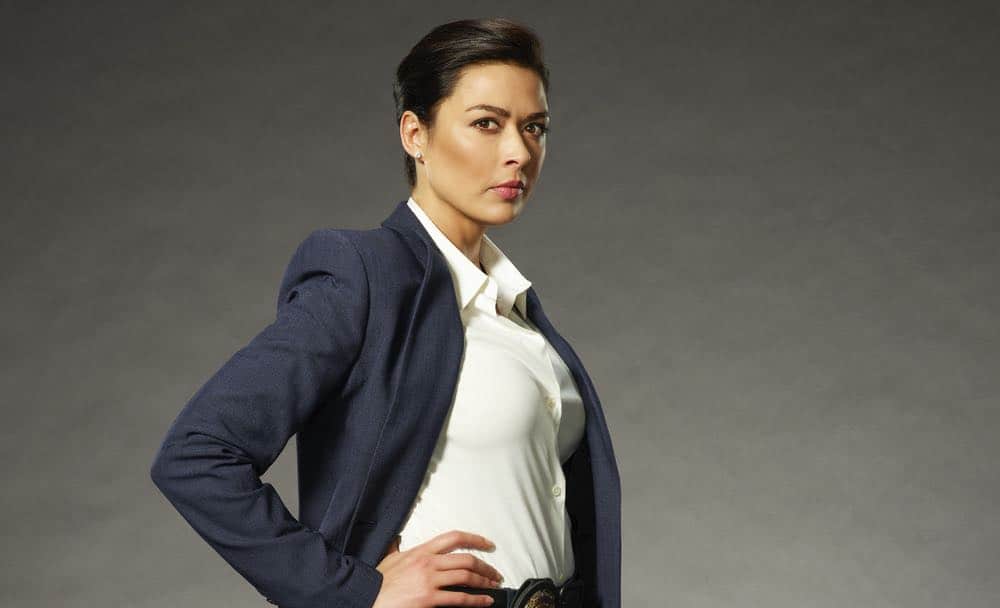 In the new summer drama TAKE TWO, Aliyah O’Brien portrays a police detective who finds herself solving crimes with the aid of a private investigator and the actress shadowing him. It is unusual and yet is provides for a fair amount of comedy amidst the dark crimes. Aliyah’s performance deftly bridges the comedy and drama and adds a fair share of sly humor into the mix. In an exclusive interview, Aliyah talks about the fun she has working on TAKE TWO and reflects on some of the other cool projects she has been lucky enough to bring to life on screen.

What was the initial appeal for you about portraying Detective Christine Rollins and working on TAKE TWO?
ALIYAH: I love playing strong, badass women. I’d like to think it’s kind of my niche really, but then again when I look at how I am in my personal life, I can be a real nerd. The appeal with Detective Rollins is she’s not only tough and no nonsense, but she has a sense of humor and a strong moral compass. I also was thrilled to work on a show that was fun and light while remaining grounded, and the fact we shot in Vancouver was icing on the cake.

How would you describe your character and how she figures into the TAKE TWO world?
ALIYAH: Christine is a second grade detective on the LAPD. She and Eddie [Eddie Cibrian] grew up on the force together and became super tight. I think they tried dating for a hot minute and then decided they were better off as friends. Like I said before, Christine has a strong moral compass and she helps Eddie catch the bad guys and make sure justice is served.

What do you most admire about her?
ALIYAH: She’s a bit of a ball buster. She takes her job very seriously, but isn’t afraid to have a little fun taking the piss out of Eddie and others. What I really love is that at the end of the day, she’s a great friend and cares about Eddie a lot. She truly wants what’s best for him.

What is it like working alongside the talented ensemble on TAKE TWO?
ALIYAH: Dreamy! Honestly, everyone is so chill and humble (except for maybe Eddie, he’s a bit of a diva…totally kidding! We like to give him a hard time). But everyone is incredibly talented and fun to work with day to day. We’ve been out a few times as a cast and it’s such a gift when you really love the people you work with!

How would you describe your character’s dynamic with Sam and Eddie?
ALIYAH: Well as I said before, Eddie and Christine are really good friends and have always helped each other out in various ways. When Sam [Rachel Bilson] comes along I think Christine is somewhat dismissive of her at first and to avoid spoiling anything, I’ll just say you have to watch to see how she feels about Sam down the road. Their main M.O. is always to solve crimes and ensure justice is upheld.

Any favorite scenes that you can share from working on the show so far?
ALIYAH: I’m not sure what I can say that won’t give the storyline away! I’m a sucker for some action and I got to do a little take down that was pretty fun. The director said I did such a good job you could hardly believe it was me and not my stunt double. My inner badass was beaming!

You also appear in the series INSOMNIA. What do you enjoy about working on that show?
ALIYAH: Oh man, that was a whole crazy experience. We shot that show in Russia which should have been its own reality show. I had a blast! I love to travel and adventure and nothing was predictable on the set of Insomnia, so it was a wild ride. I also made some dear friends on that show that I will forever be thankful for. Oh! And I had 12 days off at one point so I ventured to Denmark, Sweden and St. Petersburgh to explore. Lots to love about the whole nutty experience.

What can you share about your role as Sophie in INSOMNIA?
ALIYAH: Sophie is a smart and complex woman. I think she’s someone who you never fully know if you can trust because she’s always got her own agenda. You want her on your team because of what she’s capable of and yet you likely always keep her at arms length because you never really know where she stands and what she wants.

You have also appeared in a number of Hallmark films, including “Ice Sculpture Christmas,” “Engaging Father Christmas” and “ While You Were Dating.” What do you enjoy about working on Hallmark projects that keeps you returning for more?
ALIYAH: They are so fun! I get to work with all of my friends and play Christmas. The crew is usually always the same and they’re just a bunch of sweethearts. I’ve done two films with the “Father Christmas” cast and I adore them all so much. Also, I must say it’s really nice to bring smiles to people’s faces, as cheesy as that sounds. I’ve received tons of messages and letters from people telling me how my performances have lit up their screens and their hearts while going through tough times, including my dear sweet grade 9 and 10 drama teacher whom I adore. That is why I do what I do.

What has surprised you most about your career so far?
ALIYAH: That I’ve never once considered quitting and that it never gets easy, truly. It’s constantly testing my belief in myself and I am thankful to have the opportunity to build that stronger.

At this stage of your career, what do you think you have learned from the roles and projects you have worked on?
ALIYAH: I think I used to focus more on what I thought the producers were looking for and trying to be that, rather than focusing on what I bring to the table and what I want to do with the character. Making that shift is very empowering and a lot more fun. Trust me, I still forget sometimes. The more clear I become on why I do what I do and how I want to be and experience doing it, the better it gets and the more success I have. Basically it’s important to own your truth and live it.

Then what are the perks of where you are in your career right now?
ALIYAH: Still a work in progress but… confidence, trust, surrender. Living in Bali part-time.

Has there been any great advice you have gotten about working as an actor?
ALIYAH: So much! Off the top of my head, your imagination is your best friend. You don’t have to be broken or poke all your wounds to be compelling. Do your best and then forget the rest. Most of it is out of your control, how you show up and how you feel about yourself is in your power. Michael Kostroff on auditioning says, “You’re not getting the f*cking job!” If you can go into every audition with this attitude, you’ll take the pressure off.

What advice would you offer to other upcoming and aspiring actors?
ALIYAH: The biggest battle for most of us is within ourselves. Always make self love a priority. Do what you need to do to stay connected to yourself and do your best to not take things personally, chances are, it’s really not about you. Likely, you got into this business because acting lights you up right?! Don’t let anyone (including yourself) dim your light. Something I’m working on these days is when your mind wanders into negative thoughts, catch yourself and flip it. If you’re going to make shit up about yourself, you may as well make up good shit!

At a time when women’s voices are rising to be heard and respected around the country and world, what do you recommend your fans do to lend support in that endeavor?
ALIYAH: I think it’s about being a woman you’re really proud of, always. Taking the time to self evaluate and ask yourself if you are truly being the change you want to see in the world. For me, this includes standing up and speaking my truth and not compromising who I am to fit in or be liked. It means saying no when I mean no and yes when I mean yes, and also having compassion for those who still don’t know the difference and giving them a hand. I’m a huge advocate for people lifting each other up, especially women cheering on other women. The whole competition thing is such bullshit and so destructive. We are stronger as a team and there is always plenty to go around. The more we raise our vibrations, the more love we generate in the world. One love, baby!

Do you have any other upcoming projects that you can share that fans should keep an eye out for?
ALIYAH: As far as film and TV goes, I’m basically on lockdown with Take Two right now. More to come after we finish shooting I’m sure. I did do a short film called “La Buena” which should be doing the festival circuit this year. It’s a beautiful movie that sheds light on why people end up addicted to drugs and living on the streets. I’m very proud to be a part of projects that are building compassion and raising awareness. In line with that, my other passion project is raising social consciousness and inspiring people to let their light shine and love themselves deeply. More to come on this in the near future, but for now you can catch most of my thoughts on this on my instagram @aliyahobrien. Wishing you all tons of love and magic!

To see what surprises are in store for Detective Rollins in Season 1, be sure to tune in to the premiere of TAKE TWO on Thursday, June 21 at 10:00 p.m. on ABC. For more information about the show including sneak peek clips, you can follow the show on Twitter @TakeTwoABC. Then to see what else is coming up for Aliyah as her career grows, you can follow her on Twitter @aliyahobrien.