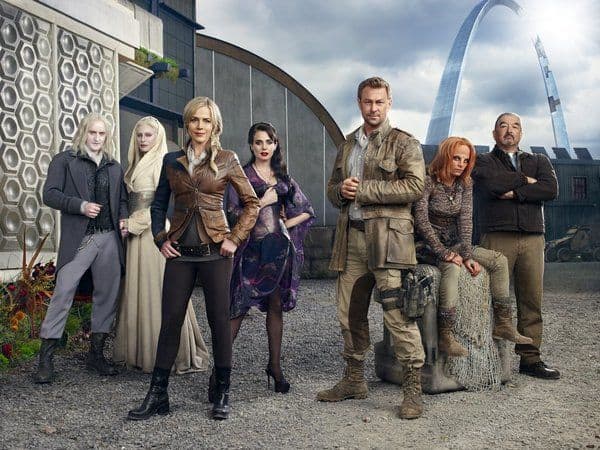 Syfy has renewed its groundbreaking series Defiance, giving a 13-episode second season order to the critically acclaimed hit that has catapulted Syfy to the top cable drama spot in the time period among adults 18-49, adults 25-54 and total viewers for three consecutive Mondays.  Season two ofDefiance, produced by Universal Cable Productions, will begin production in Toronto in August for a 2014 premiere, returning as the anchor of Syfy’s Powerful Monday’sblock of primetime original series.

Redefining the transmedia experience, Defiance has distinguished itself with an unprecedented partnership between Syfy and Trion Worlds, by creating the first-ever true convergence of television and online gaming.  To date, the game has garnered more than 1 million registered accounts while making gaming history as the first online open world shooter to launch on three platforms simultaneously.  As the collaboration between show and game continue into a second season, players will have the opportunity to further influence the world of Defiance.

“Bringing the rich world of Defiance to life has been in incredible team effort.  We couldn’t ask for better partners than Kevin Murphy, his amazing cast and crew, and Trion Worlds,” said Mark Stern, President of Original Content for Syfy and Co-Head of Original Content for UCP. “We can’t wait to see where they take us in the second season.”

Set in the near future, Defiance features an exotically transformed planet Earth, its landscapes permanently altered following the sudden – and tumultuous – arrival of seven unique alien races.  In this somewhat unknown and unpredictable landscape, the richly diverse, newly-formed civilization of humans and aliens must learn to co-exist peacefully.  Each week, viewers follow an immersive character drama set in the boom-town of Defiance, which sits atop the ruins of St. Louis, Missouri, while in the game, players will experience the new frontier of the San Francisco Bay area.

The audience for its April 15 premiere was the second largest series premiere in the network’s history among adults 18-49, making it the biggest in nearly nine years in that coveted demographic, based on Live +7 Data. The premiere also delivered almost 4 million viewers (3,834,000) and has quickly become Syfy’s highest-rated original series this year in adults 18-49, adults 25-54 and total viewers.  It has also received unprecedented attention as a transmedia event in partnership with Trion Worlds’ MMO game.  Airing Mondays at 9pm, Defiance stars Grant Bowler, Julie Benz, Stephanie Leonidas, Tony Curran, Jaime Murray, Graham Greene and Mia Kirshner.