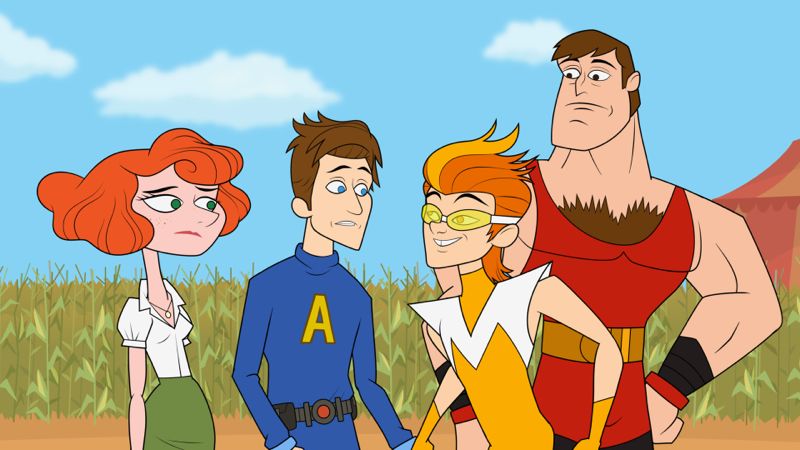 Twice a year various cable and networks attend the Television Critics Association’s Press Tour where they promote new and returning television shows through panels and exclusive preview clips.  It provides a way for television shows to get traction and attention of the hundreds of TV critics who then in turn will hopefully write about and promote those shows to their various audiences via online and print media outlets.

This Summer’s TCA tour included presentations from a multitude of cable channels, including: DirecTV and Hulu, who presented on the 12th day of the tour.  Here are some of the featured television shows and specials that caught our attention:

After breaking out last year, “Kingdom” returns for Season 2 on DirecTV.  Because the show set the bar so high, the show continues to strive for authenticity in its portrayal of martial arts fighters and the actors train virtually every second they are not on screen.  When asked about the intense fights depicted on the show, star Frank Grillo said that if the cast is not working, then they are in the gym working out and co-star Jonathan Tucker said that for his role he is aiming to lose a total of 30 lbs, of which he has already lost 20 lbs, in order to make it looks as real as possible.  Newcomer Matt Lauria even confessed, “I’m a little angrier. I fight harder in the gym. I think the beard helps — it keeps me embedded.”  Grillo laughingly admitted, that unfortunately, the downside of all the working out and crash dieting doesn’t always make for the most happy folks on set as the crazy dieting tends to make the fighter cast of the show crabby.   Talking about how even the female actors bring their A-game to their roles as fighters, executive producer Byron Belasco recalled that they had filmed one of the fight scenes with Natalie Martinez that took 10 hours, and unfortunately, Natalie was on crutches afterward as they thought she broke her foot.  But she trained like a beast to make that scene as real and as believable as possible and was a complete pro and put everything into the work.  When asked about his string of intensely physical roles over the past few years, Grillo said that the “Warrior” film changed his life as it was a very physical film and pushed him.  Grillo also credits former “The Grey” co-star Liam Neeson (who is now 64 years old) for giving him the advice to protect his knees, and that if he has his knees, he can do anything.  It is advice Grillo has taken to heart and remembers as he endeavors to keep fit and fight for roles that physically challenge.  As for the character he portrays in “Kingdom,” Grillo said that Alvey still sees himself as a peer who could get in the cage and it is what drives him.  He feels at its core the show deals with betrayal, love, loss — universal themes that everyone can relate — and that “Kingdom” also deals with difficulties other shows shy away from.  They also seek to highlight: what happens when you get too much too soon. Personal observation: It was a bit chilling hearing about the grueling workout regime that DirecTV “Kingdom” actors go through to portray their roles — acting is not just walking and talking anymore.  Also, after such a stellar final season on FX’s “Justified” as the unpredictable sharp-shooter Boon, it is fantastic to see Jonathan Tucker back in “Kingdom” Season 2. It is also great to see that Kiele Sanchez (“The Glades”), Jessica Szohr (“Complications”) and Natalie Martinez (“Under the Dome” and “Secrets and Lies”) all now star together in “Kingdom.”  (“Kingdom” returns for Season 2 on DirecTV, with Season 1 available on DVD and digital release on Monday, August 10th on iTunes, Google Play, Vudu, Amazon Instant, Sony Playstation, X-Box Nation & MGo.)

As online media continues to grow and become a household staple, Senior VP Craig Erwich said that more than 60% of Hulu’s viewers now watch in the living room using Apple TV, xBox or another streaming device.   Also, in an effort to stay competitive and to offer high-value content to their subscribers, Hulu recently acquired the exclusive streaming rights to Fox’s “Empire,” AMC’s “Fear the Walking Dead,” and “Seinfeld,” and offers streaming content for a number of FX, TNT and AMC shows.  It also boasts being the exclusive SVOD home of “Adult Swim” and “South Park.”  In addition, Hulu will continue to air is original series “Dead Beat,” which has been renewed for a third season and “The Awesomes” (which returns September 8th).  Joining Hulu’s slate of original programs include: “The Mindy Project” Season 4 starting September 15th, and its new comedy series and “Hot Wives of Las Vegas” debuting August 18th and “Casual” debuting October 7th, and its docu-series “Rocket Jump” on October 21st.

In a surprise announcement, Hulu said that will forgo the standard release entire seasons all at once approach established by Netflix and Amazon with their original series and will instead roll-out its original series weekly, one episode at a time.  Hulu believes that the week-by-week format allows audiences time to discover and enjoy together their series opposed to just releasing their original series all at once.  In addition, it allows Hulu to release their shows sooner rather than wait until each season is fully completed to release. As Craig Erwich emphasized: “We value the shared experience and the joy of the watercooler.”  Personal observation:  I am still trying to wrap my head around Hulu’s announcement that it will air its new TV shows weekly online versus the binge-watching format.  Like for example, wouldn’t “The Mindy Project” fans want to see Season 4 all at once (via binge-watching) and not have to wait for each episode weekly?!  I mean, isn’t that supposed to be the perk of online versus cable/broadcast — the ability to binge-watch and self-pace on your own schedule?  I shudder to imagine a world where online content (Netflix/Amazon) switches from binge-watching format back to weekly episodes.  In fact, for most television views, they are already binge-watching weekly TV shows in that that is what they use DVRs for. Viewers tend to save episodes and binge-watch when they have time.  Being forced to plan one’s daily schedule around the broadcast schedule for TV shows can be problematic in the current world we live in — even modern work schedules, retail shopping, delivery services have all had to adapt to changing 24/7 demands of consumers — and so should television. The television broadcast schedule was predetermined over 50 years ago when work days ended at 5 p.m. and stores closed early.  But that is an outdated system.  The next thing we’ll hear is that online streaming will only air reruns of acquired TV series WEEKLY in order to make them water-cooler accessible.  However, that is like stepping back to the early days of publishing when books were released one chapter at a time. Thank god publishing eventually switched to releasing full books and abandoned the chapter-by-week release schedule.  Imagine reading a book today one chapter at a time.  It would be your worst nightmare.  And in today’s fast-paced world, weekly television shows tend to feel the same way. Some TV shows just demand to be binged.  So jst like the book publishing industry evolved to release full books, instead of chapters weekly, so should TV shows.

After its surprise cancellation last spring, it was with relief for devastated fans that Hulu announced that it would pick up “The Mindy Project” for all new episodes starting this Fall.  In talking about the storyline that surprised most fans from last season, star Mindy Kaling explained, “We always thought it was funny an OBGYN would have an accidental pregnancy.”  As a fun treat, Garret Dillahunt will be guest-starring this next season as the doctor who takes over for Mindy during her maternity leave. Also in the Season 4 premiere, the show will have a “Sliding Doors” homage episode where Mindy visits Danny and he is dating a character played by Freida Pinto and Joseph Gordon-Levitt will play Mindy’s boyfriend, who is a guy who runs a bunch of “Real Housewives”-esque TV shows.  Personal observations:  Hulu’s acquiring “The Mindy Project” was one of the smartest and most strategic business moves all year in entertainment content.  I also love that “The Mindy Project” star Ike Barinholtz said that he has the utter confidence that their audience is young women who will be ruling the world one day. He is likely right about that. Also incredibly happy to hear Garret Dillahunt will be on the show for Season 4 — from “Terminator: Sarah Connor Chronicles” to “Raising Hope” to “Justified” and Amazon’s “Hand Of God,” he just ROCKS.  (“The Mindy Project” returns on September 15th for Season 4 exclusively on Hulu)

That’s a wrap on the DirecTV and Hulu presentation day from the Summer 2015 Television Critics Association tour.  Be sure to mark your calendars for the upcoming new series and specials as you do not want to miss out on the next great TV show that everyone will be talking about!