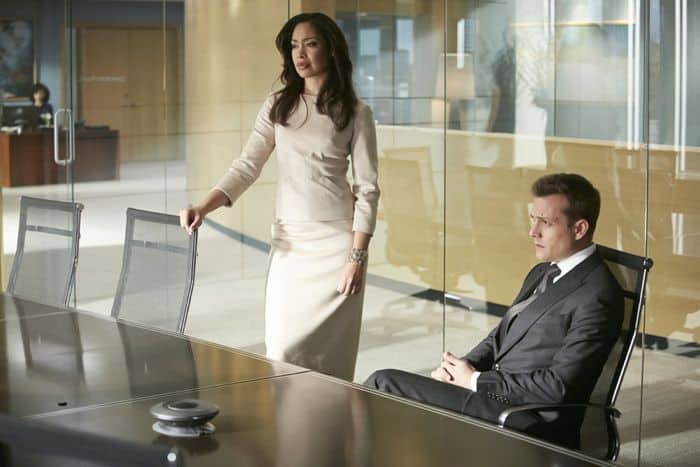 USA’s SUITS does not do small and slow, so it will be no surprise that the fourth season premiere, “One-Two-Three Go…,” aptly named, starts out fast and loud. No, that is not a sex thing, though the opening montage does find multiple main characters in a bedroom setting, including one whose love life is revealed for the first time. From there, things only get more heated as the episode promises more shake ups to come.

Mike (Patrick J. Adams) isn’t doing so well three months into his new job. It seems the only career less suited to being warm and fuzzy than lawyering is operating a hedge fund. Mike’s tried-and-true strategy of finding a win-win scenario that makes people happy does not produce big enough returns for his boss, who cares far more about the bottom line than saving jobs. In true Mike fashion, he searches for a solution. He does find one, but he needs Harvey’s (Gabriel Macht) help to make it happen, and that part of it does not go as smoothly as one might wish.

The relationship between Mike and Harvey, while no longer being the primary focus of SUITS as it once mostly was, is still a linchpin of the larger dynamic. The issues that arise between them are not the fights of enemies, but rather the actions of two men trying to find a balance in new roles. Harvey isn’t quite sure whether to treat Mike as a friend or client, and the same can basically be said of Mike.

Before this fragile arrangement can even begin to work itself out, its very existence is threatened. I love that SUITS isn’t afraid of making big plays, such as having Mike quit Pearson Specter last winter, but at the same time, I worry the writers will go too far. I tell myself that I shouldn’t be concerned, as there’s never been any reason to doubt them, each episode of the three already-aired seasons being excellent examples of drama. Still, it’s hard not to feel the tension in this situation, seeing Mike and Harvey at odds so steep.

Caught in the middle of this is Rachel (Meghan Markle). She may be living with Mike, but she’s Harvey’s new associate, replacing Mike at the firm that she owes major debts to. Mike and Harvey are stand-up guys and neither would intentionally ask her to choose sides, but there are bound to be conflicts in this situation, including at least one that arises in “One-Two-Three Go…” What will be interesting to see is how Rachel deals with such power-wielding men, generally preferring a softer touch herself, though she does rise to occasion.

Louis (Rick Hoffman), for his part, overhears Harvey spouting some platitudes and decides to adopt this as his new business strategy. One cannot blame Louis for emulating Harvey. After all, their friendship is firmly established, and Harvey now has what Louis yearns for – his name on the letter head. What better way to try to reach that goal than by copying the master? However, what works for Harvey has never worked for Louis, and one can see right away that Louis may not be making the right decision.

I continue to be slightly flummoxed by the role of Katrina (Amanda Schull), Louis’s associate, in the series. Is there sexual tension between them, or is she Louis’ Mike? I feel like it’s a bit of both. Things between Katrina and Louis, at least on her part, don’t quite feel platonic. Yet, they are almost as hands-off as Donna (Sarah Rafferty) is with Harvey. Is this going somewhere other than the professional, or is it just a weird relationship?

As usual, the best parts of the SUITS premiere are moments between characters, rather than the bigger twists. Mike and his client (Michael Gross, Family Ties) have a typical Mike scene where the former lawyer pours his heart out. Dialogue involving Donna and Harvey, Donna and Mike, Donna and Jessica (Gina Torres), and Donna and Louis sparkles, proving once more that Donna has some of the best written lines, at least among those not involving movie references. Mike has an assistant that is his version of Donna; there might just be some staying power there. And there’s a sequence between Harvey and Jessica that is extremely touching and insightful.

Toss in D.B. Woodside (24, Single Ladies) in a recurring role sure to excite many fans, and SUITS has done it once again, delivering another powerful, beautifully acted episode with as much soap as any other scripted drama, but far less cheese and far more authenticity. SUITS is a near-perfect series, certainly the best thing on USA, past or present. I can’t wait to see what else the summer has in store for it.