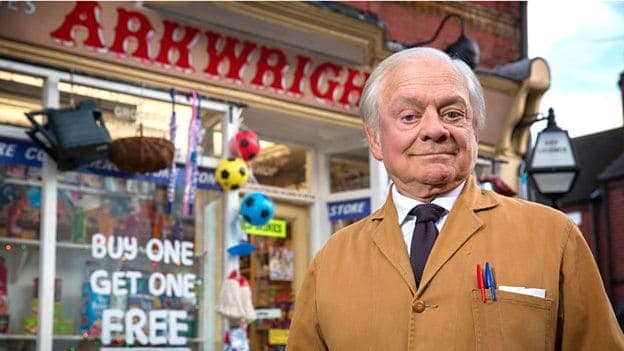 BBC One viewers will be treated this year to a fifth series of the hugely popular Still Open All Hours , featuring the nation’s most loved convenience store Arkwright’s.

The series has proven a huge hit with audiences since it began in 2013, with an average of nearly 6 million viewers per episode. Location filming and studio recording will take place over the summer.

On the forthcoming episodes Sir David Jason says of reprising his much loved character Granville: “I’m thrilled to be bringing Granville and Arkwright’s shop back to viewers’ TV screens along with his regular customers who bring their own sense of barminess to the world of grocery.”

BBC Commissioning Editor, Gregor Sharp, says: “We’re delighted to see Granville flip over the sign on Arkwright’s and open up for another series of Still Open All Hours – it’s enduring popularity is a testament to the brilliance of Roy Clarke’s scripts and the impeccable performances of a cast of comic legends at the height of their powers.”

Executive Producer, Gareth Edwards, says: “With a cast of national comic treasures and a great new set of scripts it’s a pleasure to be paying another visit to Britain’s daftest corner shop.”

Written by Roy Clarke, Still Open All Hours is a BBC Studios production, commissioned by Gregor Sharp, BBC Comedy Commissioning Editor. It is produced by Sarah Hitchcock and directed by Dewi Humphreys.