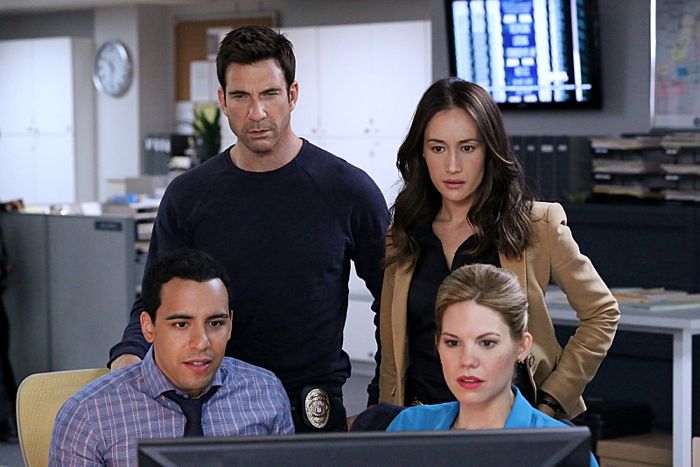 Soon, CBS will premiere their new drama STALKER. The title is pretty apt, as it follows two (OK, four, but two main) detectives who investigate stalker cases. Both of the leads have a dark edge to them, which makes them well suited for the work, but also maybe a little too close in personality to the people they track and assist. Presumably, they will go after fresh suspects every week.

Maggie Q (Nikita) plays Lieutenant Beth Davis, the boss of the department. She’s experienced, smart, and gets the job done. It’s appropriate casting for Q, in her wheelhouse of tough and moral women. Beth is also probably a victim, like Nikita was, that sees her career as a chance to avenge the wrongs committed against her and protect others from suffering the same fate. She sometimes gets a little violent in doing so. It may be a very similar role to the one the actress just played, albeit one more inhibited by the law, which should make for fewer leather-suited martial arts displays, but at least it’s clear she knows how to inhabit it well.

Beth’s new partner (well, underling that acts as a partner) as STALKER begins is Detective Jack Larsen (Dylan McDermott, The Practice, American Horror Story). Jack has recently moved to the city, and we soon find out he has a very good reason for choosing this place. Jack is even less prone to following the rules than Beth, and has a creepy edge about him I at first thought was just carry over impressions from his recent role on Hostages, but definitely pertains to the current part, too. He is in no position to reign Beth in, and may discover they are polar opposites playing the same game.

STALKER is likely to develop Beth and Jack only minimally as the weeks go on, preferring growth to occur on an extended timetable. There is a really interesting way things could go with the pair, but more likely, character development will take a back seat to a rote procedural, where the crime is more important than what happens in the detectives’ lives. Jack could conceivably change his position dramatically later on, but I think CBS is unlikely to allow this to happen, as their drama series such as this one tend to firmly avoid blowing up the basic premise.

I have spent plenty of time in my reviews moaning about the numerous crime shows already on the air, and STALKER has little to set it apart from the others. True, no one else is specifically investigating stalker cases, but that’s where the originality ends, the story as formulaic and repetitive as many, many others. Don’t expect it to become a groundbreaking, critically-acclaimed, or award-winning program.

That being said, for what it is, STALKER has plenty of quality. The two main actors are wonderfully cast, and have more than enough acting chops to handle their characters. The first case-of-the-week is well thought out and engaging, the writing being pretty solid, lacking the plot holes that other new premieres are facing. There are two supporting players, Mariana Klaveno (True Blood) and Victor Rasuk (How to Make It in America), who also portray detectives in the unit and who can pick up the slack when our leads are busy with other things. There’s also an arc that surely will be downplayed and simple enough that occasional viewers won’t mind it, but will provide something of a reward for those that tune in weekly.

I don’t think STALKER will make it onto my TiVo just because it, like its peers, is likely to get boring and predictable to those of us that arguably watch way too much television. But if you’re looking for turn-off-the-brain escapism that is exciting and fun, popcorn entertainment, than STALKER is a respectable entry in the genre.