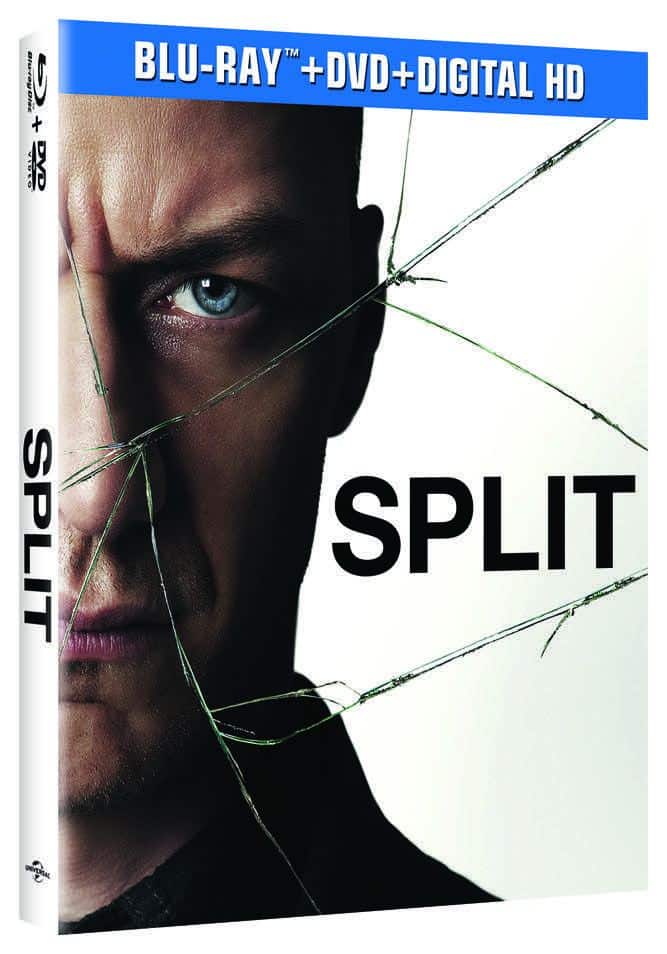 Writer and Director M. Night Shyamalan (The Sixth Sense, Unbreakable, The Visit) delivers his most gripping film yet with SPLIT, an original psychological thriller available on Digital HD on April 4, 2017 and on Blu-ray™, DVD and On Demand on April 18, 2017, from Universal Pictures Home Entertainment. Jason Blum (Insidious, Ouija, The Visit, The Purge series) returns to collaborate with Shyamalan in the box-office hit, starring James McAvoy (X-Men: Apocalypse, Victor Frankenstein). The frightening thriller SPLIT delves into the mysterious depths of one man’s fractured mind as a terror unlike the world has seen prepares to be unleashed. SPLIT offers viewers a closer look at the movie fans are raving about with a never-before-seen alternate ending, deleted scenes, character spotlight, and a behind-the-scenes look at the making of the film.

Heralded as “one of his best films – period” (Alex Welch, IGN), M. Night Shyamalan returns to the screen with SPLIT. Kevin Crumb’s (McAvoy) fractured mind has revealed 23 personalities, but one remains dangerously submerged, set to materialize and dominate the others. McAvoy delivers “the role of his career” (Peter Debruge, Variety) as Kevin reaches a war for dominance among all those that rage within him, threatening his stability and impacting the survival of everyone around him.

BONUS FEATURES on BLU-RAY and DVD TM
Alternate Ending
Deleted Scenes
The Making of Split- Filmmakers, cast, and crew discuss what attracted them to the project and how they were able to bring such a unique premise to life.
The Many Faces of James McAvoy- A look at how James McAvoy approached the challenge of playing so many different identities.
The Filmmaker’s Eye: M. Night Shyamalan – Director and writer M. Night Shyamalan has a singular, big-picture vision of his projects. Producers, cast, and crew discuss how Night’s process gives them the freedom to execute their roles to the fullest.
The Blu-ray™ Combo Pack includes a Blu-ray™, DVD and Digital HD with UltraViolet™.
Blu-ray™ unleashes the power of your HDTV and is the best way to watch movies at home, featuring 6X the picture resolution of DVD, exclusive extras and theater-quality surround sound.
DVD offers the flexibility and convenience of playing movies in more places, both at home and away.
Digital HD with UltraViolet™ lets you watch movies anywhere, on any device. Users can instantly stream or download movies to watch on iPad®, iPhone®, Android™, smart TVs, connected Blu-ray™ players, game consoles and more.