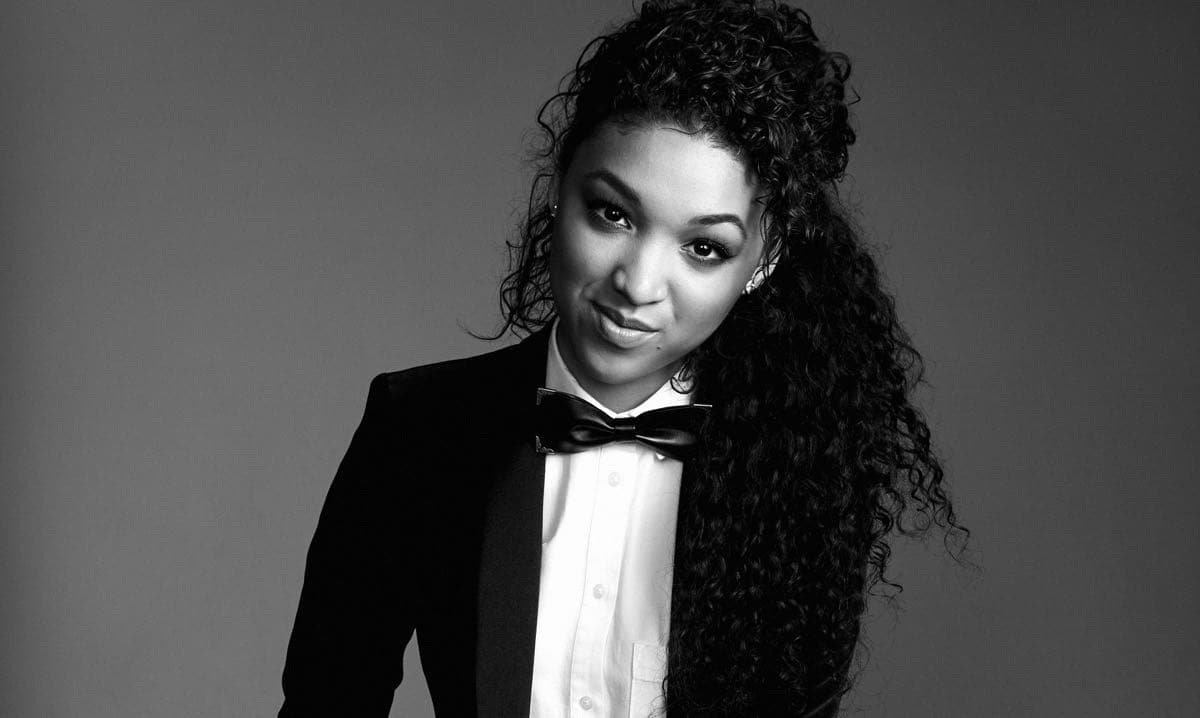 Rising young actor Gabrielle Elyse is on a hot streak right now as she appears in two new digital series SNATCHERS and “Dimension 404” and just appeared on ABC’s BLACKISH.  SNATCHERS is the new digital comedy-horror series available on Stage 13’s YouTube channel about a teen who finds herself impregnated by an alien, and “Dimension 404” is the 6-episode anthology series coming on Hulu.  To get the scoop on what her new series are about, in an exclusive interview Gabrielle describes the characters she portrays and the appeal of the wide variety of roles she has chosen this year.

What initially appealed to you about the role of Hayley Chamberlain and working on SNATCHERS?
GABRIELLE:  What initially drew me to Haley was how she just didn’t accept delivery on any type of nonsense. Any time Sarah (the other lead played by Mary Nepi) would throw something at her, Haley was always on top of it to smack it down. The dynamic between the two best friends was something I was really drawn to as well. The two of them have a great love for each other which is why they were able to pick up right back where they left off. Even if the conditions they’re under were a little wacky.

How would you describe who Hayley is?
GABRIELLE:  She is very self-assured and self-confident. She’s unfiltered. Which is why she was able to be authentically herself in high school. She didn’t conform to a click… That is so hard to do when we enter high school. Everyone feels like they must “fit in” somewhere in order to survive. Haley thinks the opposite. She’s is not afraid to show her nerdy, artistic side, all while being sharp and witty.

What did you most admire and/or like about her?
GABRIELLE: I LOVE how she can just stand on her own. She’s so self-confident and unapologetically herself all while having a big heart. And I mean come on.. Who ever says, “I don’t have a geeky side,” totally doesn’t get me!

How would you describe the part Hayley has to play in the series?
GABRIELLE:   Haley is the voice of reason between the two girls. Which is often derailed because there is not enough information yet for anything to be logical. However, she does play a great friend to Sarah. She’s right there to help and comfort her.

How does she connect with the other characters the show?
GABRIELLE:   It’s an extension of how she connects with Sarah. Haley’s stable and she sees things for what they are.. And she’s not afraid to make that known either!

What has been your favorite part about working on this project?
GABRIELLE:   Everything. Going to that set everyday was a joy. The cast and crew always brought it and never wavered in positivity. And this project is one of my favorite projects I have ever gotten the privilege of working on. Sure, there are a lot of teen comedies out there but this one kept the story in tact all while having hysterical moments and the horror stuff is actually scary. Never have I seen so many genres blend together so effortlessly.

What was one thing you (as an actor) took away from working on SNATCHERS?
GABRIELLE:   As an actor, I learned how to be patient with all the action scenes and animatronics that went into this project. It made me greatly appreciate the attention to detail our directors envisioned. And yeah.. Most of the time we were either crawling around in fake blood or covered in fake blood. You got to learn to be a sticky mess.

You also appear in “Dimension 404” for Hulu.  What was that experience like for you?  What was your favorite part of working on it?
GABRIELLE:   “Dimension 404” was awesome!! I got that roll because the directors for SNATCHERS were also directing an episode of “Dimension 404.” They were talking about their new series they were about to film with Dez Dolley, the creator/director of Dimensions and they showed him the short that the series was based on, which I was in!  I can’t wait for people to see it. Each episode is a different cast and story. Mine revolves around a bunch of nerds in a haunted arcade shop in the 80’s. Which was super cool for me because it was my first “period” piece.

And you also just guest-starred on BLACKISH.  What did you enjoy the most from that role and working with the BLACKISH cast?
GABRIELLE:   BLACKISH, to me, was a testament to how persistence can eventually bring your goals to fruition. The day the series premiered, I said to myself, “ I have to be on this show.” So it was such a huge moment for me when it came full circle. To work with such talented young actors was such a professional joy. This show is one of my favorites to watch week to week.

At this stage of your career, what do you think you have learned from the amazing variety of roles and projects you have worked on?
GABRIELLE:   What I have learned is, it validates that my chosen profession of being an actor is absolutely where I want to be.

Then what are the perks of where you are in your career right now?
GABRIELLE:   Perks? Hmm. That’s all in your perspective. I’d say that I view “perks” in this way, as industry professionals such as casting directors, producers, and directors not only get to know me but are becoming more and more confident in my ability to deliver great performances. I am offered the opportunity to audition for more things. I’d also like to say that one of my perks is as my audience begins to grow, I am able to be a voice to racial equality and unity.

If there were one role you would like to revisit, which would it be and why?
GABRIELLE:   I would have to say that if I were able to revisit a roll… It’d be my guest star roll on BLACKISH. That whole cast is ENORMOUSLY talented, the set was a dream, and I just think Kenya Barris is brilliant.

Has there been any great advice you have gotten?  What advice would you offer to other upcoming and aspiring actors?
GABRIELLE:   The best advice I have ever gotten is to embrace all that you are. You have so much to offer and so much strength to draw from. I would say that to any actor trying to make it. Be yourself. It’s that simple.

Do you have any other upcoming projects that you can share that fans should keep an eye out for?
GABRIELLE:   I do!!! There are things in the works but I got to keep it hush hush right now. However, I am so stoked for you guys to see what’s coming next.

At a time when women’s voices are rising to be heard and respected around the country and world, what do you recommend your fans do to lend support in that endeavor?
GABRIELLE:   Find your voice and SPEAK! Trust me, someone is listening. Get involved. Contribute however you can. Any support is great support.

To see more of Gabrielle’s work on SNATCHERS, look for it to be released on Stage 13’s YouTube Channel.  Preview of SNATCHERS: