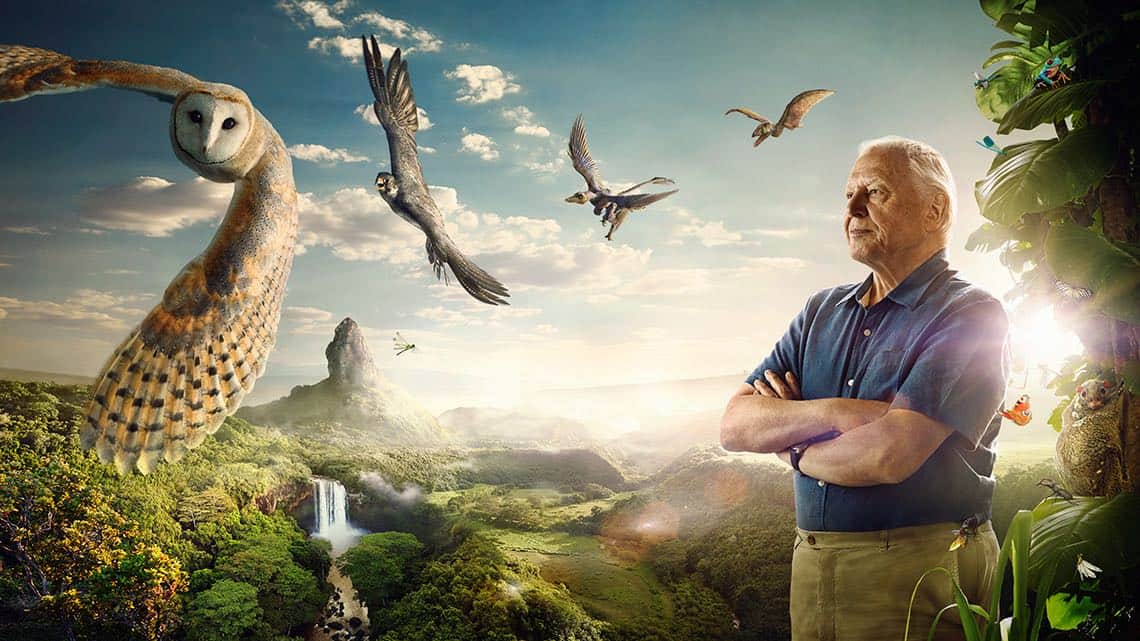 The three-part series DAVID ATTENBOROUGH’S CONQUEST OF THE SKIES leads the special event on Wednesday, April 6 at 8 p.m. ET/PT, as Attenborough travels from the rainforests of Borneo to the upland meadows and arid canyons of Spain to the English countryside and China to explore the fascinating origins and evolution of flying animals on Earth. In FLYING MONSTERS WITH DAVID ATTENBOROUGH, a one-hour special premiering on Wednesday, April 27, Attenborough sets out to uncover the truth about the mysterious pterosaurs and why these enigmatic creatures took to the air. The three-part series MICRO MONSTERS WITH DAVID ATTENBOROUGH, premiering on Wednesday, May 4, sees Attenborough tracking the incredible evolution of terrestrial arthropods, bugs.

Sir David Attenborough, who turns 90 on May 8, has had a distinguished career in television that spans more than 60 years. His films and series have been seen by audiences around the world and have won nearly every major award in television, including Emmys and British Academy Awards. Last year, he was honored with a Peabody Award for Individual Life Achievement.

The full slate of “Wild With Sir David Attenborough” is as follows:

DAVID ATTENBOROUGH’S CONQUEST OF THE SKIES

Humans have mastered flying for years, but we’re actually newcomers to flight in comparison to some animals on Earth. The premiere episode, “FIRST TO FLY,” unravels the evolution of flying animals by exploring the unexpectedly advanced world of the very first flyers, insects. In the second episode, “RIVALS,” Attenborough charts the rise of new, larger creatures: extinct reptiles that flew on wings of skin, dinosaurs that sprouted feathers to become the ancestors of birds, and gliding mammals that emerged from a life in the trees to dominate the night as bats. In the final installment, “TRIUMPH,” viewers travel with Attenborough to explore the highly versatile flyers that dominate our skies today– from peregrine falcons, to hummingbirds hovering in cloud forests, to the mass exodus of a million bats in a cave in Borneo.

Millions of years ago, when dinosaurs roamed the Earth, another group of ancient reptiles–the pterosaurs–made an extraordinary leap, defied gravity, and took to the air. Why did they fly? How did they fly? And why did they disappear? Using cutting edge technology and spectacular CGI, FLYING MONSTERS transports viewers back to an awe-inspiring ancient world inhabited by these creatures of all sizes, some with a wingspan of up to 45 feet, which lived alongside dinosaurs 220 million years ago. The story unfolds in stunning locations around the globe, as Attenborough works with scientists and engineers to unravel one of the greatest mysteries in paleontology, an evolutionary tale more fantastical than fiction. Along the way, he discovers that the marvel of pterosaur flight has evolutionary echoes that resonate even today.

Bugs, the most dominant animals on our planet, outnumber us and have outlived every catastrophe Earth has thrown at them for 500 million years. They are so intrinsic to the natural world that without them we would struggle to exist. In part one, “CONFLICT,” Attenborough investigates the violence, rivalries and deadly weaponry existing within the world of bugs. The second installment, “COURTSHIP,” unravels the unusual mating rituals of the creatures beneath our feet, including that of the male Chilean rose tarantula. While most of the series focuses on conflict, the final episode, “FAMILY,” is all about bugs that prefer cooperation in lieu of broken societies. Among the featured creatures are the suitably named social spiders that spin a single enormous, nearly 100-foot web for the whole colony, a queen bee that rules her hive with a strict hierarchy, burrowing cockroaches, and some green ants showing team spirit to help build a nest together.

DAVID ATTENBOROUGH’S CONQUEST OF THE SKIES is produced by Atlantic Productions for Smithsonian Channel in association with Sky. The series is written and presented by David Attenborough and produced by Anthony Geffen.

FLYING MONSTERS WITH DAVID ATTENBOROUGH is produced by Atlantic Productions for Smithsonian Channel in association with Sky.  It is written and presented by David Attenborough and produced by Anthony Geffen.

David Royle and Charles Poe serve as executive producers for Smithsonian Channel on all three programs.