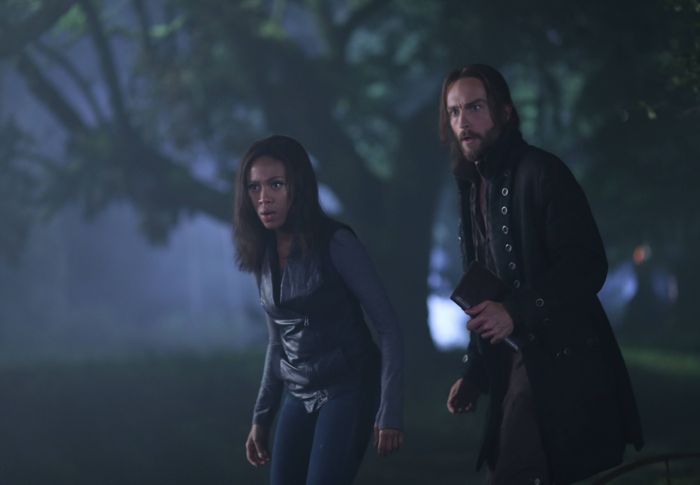 Week two of season two of FOX’s SLEEPY HOLLOW may be a tad better than the premiere. “The Kindred” finds Abbie (Nicole Beharie) and Ichabod (Tom Mison) on a quest to rescue Katrina (Katia Winter) from the clutches of the Headless Horseman (played by Abraham Van Brunt when shown with a head). But Katrina has an idea that it might be a good idea to stay captive and serve as a mole within the organization. Will her ploy work?

First, SLEEPY HOLLOW must be complimented on the terrific new theme song, which features images of all the main players. This makes it even more like Buffy the Vampire Slayer, which it is already feeling similar to, given the library-like Archives the characters use as a base and the subtitle font displayed when the demons speak. None of this is a bad thing, as Buffy is quite an excellent show, and SLEEPY HOLLOW is different enough to have its own identity.

Despite starting with yet another unnecessary dream sequence / fake out, “The Kindred” is a solid episode. Not only does it provide drama and action and some cool special effects, but it also returns things to normal for SLEEPY HOLLOW. Normal in this case meaning Abbie and Ichabod are working a mission together against evil forces, spiked with some humorous dialogue to highlight the time travel aspect, such as Ichabod ranting on credit cards this week. It’s fun and exciting and exactly the kind of episode fans love, extending the mythology, while also having an immediate story to serve.

There are some really smart twists in “The Kindred.” When figuring out a way to distract the Headless Horseman, our dynamic duo resurrects a corpse that Ben Franklin (Timothy Busfield) sewed together. It turns out Benjamin Franklin is the original Dr. Frankenstein, which is a neat play on names. The creature disappears at the end, leaving a hanging thread sure to be picked up again later. The Horseman’s argument to Katrina against Ichabod actually makes some logical sense, and while I don’t think she’ll fall for it, I was impressed at the reasoning. It’s also cool when Henry (John Noble) turns out to be Irving’s (Orlando Jones) doctor, foreshadowing all sorts of doom, especially when a contract is signed in blood.

With Irving locked up, there’s a new sheriff in town, literally, played by House of Card’s Sakina Jaffrey. What’s interesting about this new character is that she seems like a good person and is very competent, doing what she thinks is right, but how capable she is actually works against Ichabod and Abbie. One assumes Irving will resume his post soon, and this woman’s connection to Abbie and Jenny’s (Lyndie Greenwood) mother makes me suspicious of her. But for now, there’s nothing obviously telegraphed for her, and she’s a realistic obstacle for the plot.

Of course, while SLEEPY HOLLOW may be returning to normal, sometimes things can hew a little too closely to normalcy. Katrina is once more trapped, apart from her love. Jenny is back in the asylum. I don’t think either of these things will stick. However, because of them, “The Kindred” gets a little too close to season one’s structure, risking repeating itself.

It also seems a bit like a cop out when a character speaks of unreliable prophecies. True, all sorts of documents foretelling the future have been proven untrue, so it makes sense that the stuff about the witnesses and their destiny in SLEEPY HOLLOW should also be shaky, at best. However, because these things are an essential part of the show, it feels like the writers are just trying to make sure they don’t write themselves into a box, leaving a loophole in which to wiggle out of “established” items when they deem fit. It’s convenient from a storytelling perspective, but makes the driving arc murky.

Overall, those gripes are really overshadowed by the excellent job the cast and crew is doing with this production. SLEEPY HOLLOW remains a series I look forward to tuning in to every week, and it’s far from predictable. Season two should be at least as great as season one, if these first episodes back are any indication.