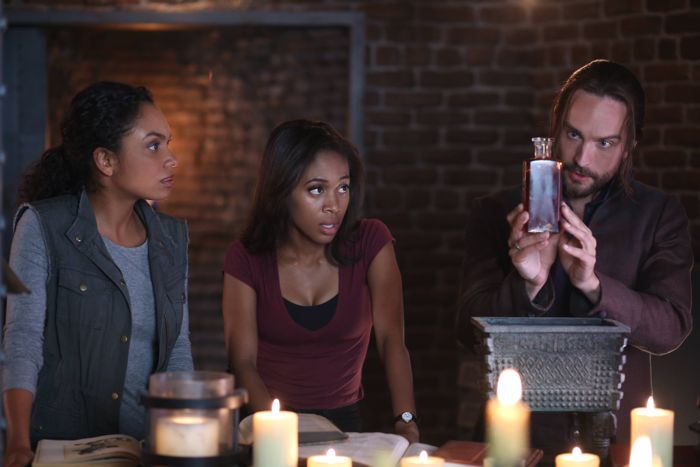 This week’s SLEEPY HOLLOW verges on really good, but has a few elements that don’t quite hit the mark. “And the Abyss Gazes Back” finds Joe Corbin (Zach Appelman, Kill Your Darlings) returning to town from Afghanistan. He’s been a solider overseas, hence why he misses his dad’s funeral, and now he’s come home, with a chip on his shoulder, to follow his father’s final instructions. He quickly gets drawn into the supernatural game.

The idea of Joe is kind of hokey. This is someone we’ve heard nothing about, yet he drops in with an already-established history with Abbie (Nicole Beharie). Shows do this all the time, of course, but it really seems strange that a new player important to the show’s mythology would enter the picture this late, this suddenly. Stranger still, even after getting the full story, Joe decides to go to Quantico, rather than stay and join the team, ruining the role.

I understand that shows have guest characters to move the narrative along and Joe fits firmly in a typical guest character mold. What’s disappointing is that SLEEPY HOLLOW should be better than this. It isn’t the typical procedural, and when it presents installments that lean in that direction, like “And the Abyss Gazes Back” does, it’s upsetting. Joe could easily be written as a long-term player, but isn’t. Why not?

That being said, “And the Abyss Gazes Back” is not the worst episode of SLEEPY HOLLOW to date. Despite Joe’s fleeting appearance, he does contribute something to the main characters. He brings father/son themes to the story, as well as shedding a little light on Sheriff Corbin, who remains a vital figure, even if a short-lived one.

Joe is bitter about how he thinks his father valued Abbie more than him, and that sparks something in Ichabod (Tom Mison). Thus far, we’ve not seen Ichabod talk about his feelings for Henry (John Noble) much, but he reveals that he does still love his son. This is a little hard to wrap one’s head around. Sure, Katrina (Katia Winter) thinks their son can be saved, but Ichabod seems more grounded than she does. Henry is very clearly evil, cursing Joe and taking Irving’s (Orlando Jones) soul. How can Ichabod hope for redemption? Yet, every parent doesn’t want to believe the worst about their child, no matter who that child may be, so it makes a kind of sense.

The scenes between Abbie and Joe are really sweet, after the initial conflict. Abbie did take Joe’s father’s attention away, but in a sense, that makes them like siblings. We get that by the end of the hour. Children grow up and get over petty jealousies, especially once they can see the bigger picture, which is hard to do when one is young. These two have an interesting relationship I’d love to see explored more.

Irving’s plot in “And the Abyss Gazes Back” is compelling. Learning that Henry owns his soul, Irving tries to resist Henry’s first job for him, which could also be his last: kill the man that paralyzed Irving’s daughter. Irving is sorely tempted to go through with it. Now only would the act get Irving out of the soul deal (or so Henry says; one can’t really trust him), but it would allow Irving to get vengeance for a very dark past wrong. However, Irving is not a monster and stops himself, even though he wants to strangle the man. No matter what happens after this, the episode firmly establishes Irving as a hero, not a traitor or stooge forced to the other side.

“And the Abyss Gazes Back” has some fun moments, with Ichabod getting into video games and trying to remember who Superman is. But it also gets a little goofy when he talks about knowing Daniel Boone. Is there anyone Ichabod didn’t know from colonial times? The world has far fewer people back then and Mr. Crane obviously ran in esteemed circles, but it’s getting a little ridiculous that he is personally acquainted every single person of note.

Over all, I like “And the Abyss Gazes Back,” but it is neither the best nor worst installment of SLEEPY HOLLOW this season. There are some of the elements present that consistently make the show great, while also taking some of the too-often-traveled routes other shows use. My wish is that the writers really come into their own and own their cool concept, tossing off the shackles of what they think broadcast television needs to be.