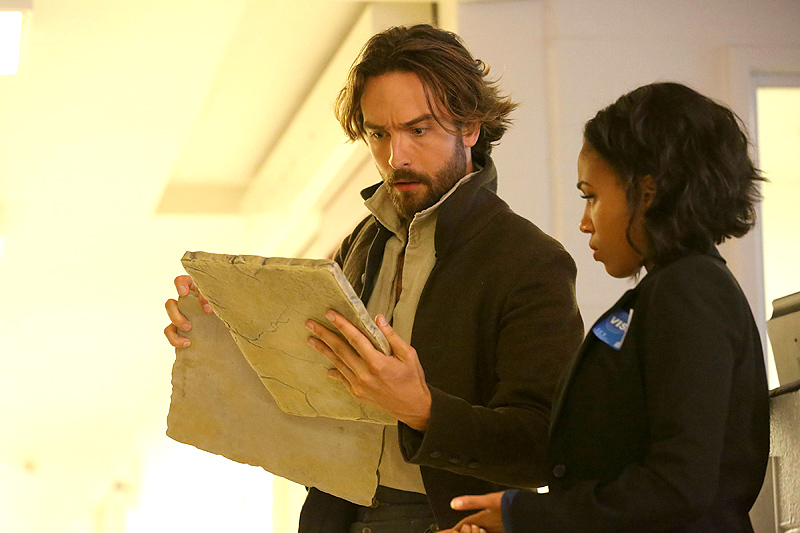 SLEEPY HOLLOW returns for a third season on FOX with “I, Witness.” Ichabod (Tom Mison), gone these past nine months, returns home just as a demon begins terrorizing the town. Abbie (Nicole Beharie) is happy to see him and lend a hand, but her new job as an F.B.I. agent keeps her (sort of) busy, though luckily she’s still assigned to the area. But is the demon an isolated menace, or does a mysterious woman who happens to be fond of boxes portend further troubles?

I will be the first to say that SLEEPY HOLLOW is in need of a reboot this season. Last year devolved into a boring procedural that lost cohesion and became quite full of plot holes. But the way in which “I, Witness” begins could give anyone whiplash. Irving has left town, Katrina and Henry are really dead, The Headless Horseman is destroyed in the opening minutes, and the archive building is about to be torn down. Other than our two leads and Jenny (Lyndie Greenwood), who remains a helping hand, the show has tossed out just about everything that has anchored its first couple of runs.

That may or may not be a good thing. “I, Witness” is certainly an interesting episode. The demon is but a brief distraction, with the majority of the plot focused on more ongoing tales. There’s lots of banter between Abbie and Ichabod as they catch up, having not seen in each other in nine months, and the aforementioned mysterious woman, Pandora (Shannyn Sossamon, Wayward Pines), is definitely present to stir things up. That gets SLEEPY HOLLOW back to its strong roots, a sweeping mythology story of the two witnesses trying to stop the seven tribulations.

Where things fall apart a bit for me is the inconsistency in the way the story is laid out. Aren’t the seven tribulations basically supposed to be hell on Earth? How come almost no one has noticed the world is in serious peril yet? Abbie says she has a new job that keeps her busy, but she gets to run around with Ichabod as much as she wants during the day. (The fact that the demon gets mixed up in her unconnected case is just ridiculous.) And SLEEPY HOLLOW can’t decide if it wants to stick with history or not, bringing Betsy Ross (Nikki Reed, the Twilight films) into the story as a super spy. It’s a bit more jumbled than it needs to be.

Killing the horseman is the biggest miss. This is someone who has been a dangerous foe and has a lot of history with our heroes, and there isn’t even any set up to get him to this point. To wipe him out in a brief scene with Pandora feels wrong. He deserves more than to be written off without even getting the chance to fight back. I could be wrong in thinking he’s permanently deceased, but that’s what seems to happen when his powers are taken and he dissolves in the black smoke.

That being said, I’m willing to give this year a chance to make up for past wrongs. Betsy and Pandora are but two of the four new main characters, the other two sitting out this episode, though we’ve seen one of them before. The story seems poised to get back into longer arcs and more personal backstory. And Abbie and Ichabod are back to doing what they do best, saving the world with the same chemistry any other crime procedural duo has. So it looks like “I, Witness” gets things off to a mostly good start.