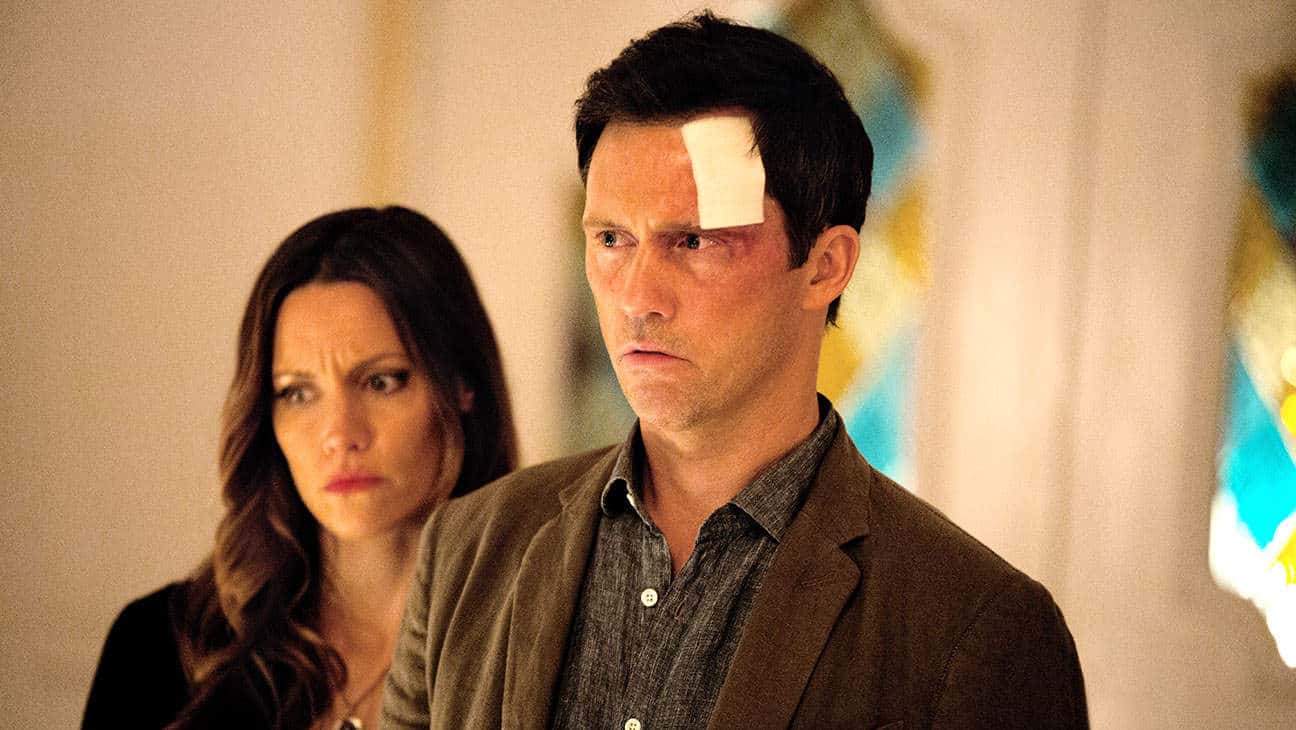 My name is Charlie Haverford. I used to be a magic trick inventor. Until I became a fake psychic for a bunch of gypsies. When you’re a fake psychic, you’ve got nothing: no say in what you do. You do whatever work the Romas who control the area send your way. You disappoint anyone who’s still talking to you: an unsatisfied wife, a screw-up sister, kids, too, a hypnotist, if you’re desperate. Bottom line? Until you figure out how to get out from under the Roma thumb, you’re not going anywhere.

OK, so fun with the intro to this review aside, there are major difference between Jeffrey Donovan’s previous USA series, Burn Notice, and his new drama on Hulu, SHUT EYE, premiering this week. Still, it’s hard not to draw some parallels. Donovan’s Charlie used to be great at something, has gotten into a situation where he’s not doing what he wants to do, and doesn’t have an easy way out, sort of like Michael Weston. Also, those around him, while supportive, are not the A team he might pick, but he’s committed to them.

Yet, I like SHUT EYE a lot better than Burn Notice. Burn Notice was a thin, case-of-the-week procedural that rarely went anywhere until the end. SHUT EYE is a much more complex, ongoing tale in which a man who has been beaten into submission gains an actual clairvoyant gift, which may just be what he’s been waiting for to make some changes.

Donovan is good, building upon his success in Fargo last year. He’s someone who can play pathetic and obedient well, but there’s an edge to him that is interesting. He is surrounded by a decent cast that includes KaDee Strickland (Private Practice), Isabella Rossellini (Alias, Joy), Emmanuelle Chriqui (Entourage), Susan Misner (The Americans), David Zayas (Dexter), Mel Harris (Saints & Sinners), Dylan Schmid (Once Upon a Time), and Angus Sampson (Fargo). Almost all are well cast, and the dynamics are set pretty solidly in the pilot.

The world is one not often portrayed in long-form, that of con men and women running a very successful racket of an industry, which I appreciate. Of course, those involved are little better than thugs and gangsters, and who is on top is purely a matter of showing strength and effectively threatening. It’s seedy stuff, but a new version of the dark worlds that currently populate television.

Somehow, though, through it all, Charlie comes across as being a likeable character. Rossellini’s Rita says it best when she calls him an honest liar. Charlie does engage in the same trickery as the others, but he also helps people and cares about people. He is loyal and he follows the rules, until he is pushed past a breaking point. Even then, his intentions are good, and he’ll only turn on those who deserve it. He’s a bit noble, which is surprising, given his profession and the situation he’s in.

SHUT EYE is set up to be a hero’s journey. We’re likely to see Charlie find his inner spirit and fight back when he needs to. We’ll see him rise from his lowly position and be a man to be proud of. Hopefully at least Linda (Strickland), his wife, will see that, and maybe stop fooling around with Gina (Chriqui) on the side, not that viewers are likely to blame her in the moment; Charlie hasn’t yet awoke when that occurs. Still, I find myself rooting for them to fix their marriage, and thinking Charlie might forgive her if he learns the truth.

SHUT EYE isn’t a perfect series. The story isn’t as gripping as one might like, with the flaws in the characters being a detriment to engaging with the story. Some of the plot twists or momentum seems forced and artificial. None of the performances are the type to make you start thinking of awards season, though they’re serviceable across the board. But it’s pretty good, and I do want to see more of it.