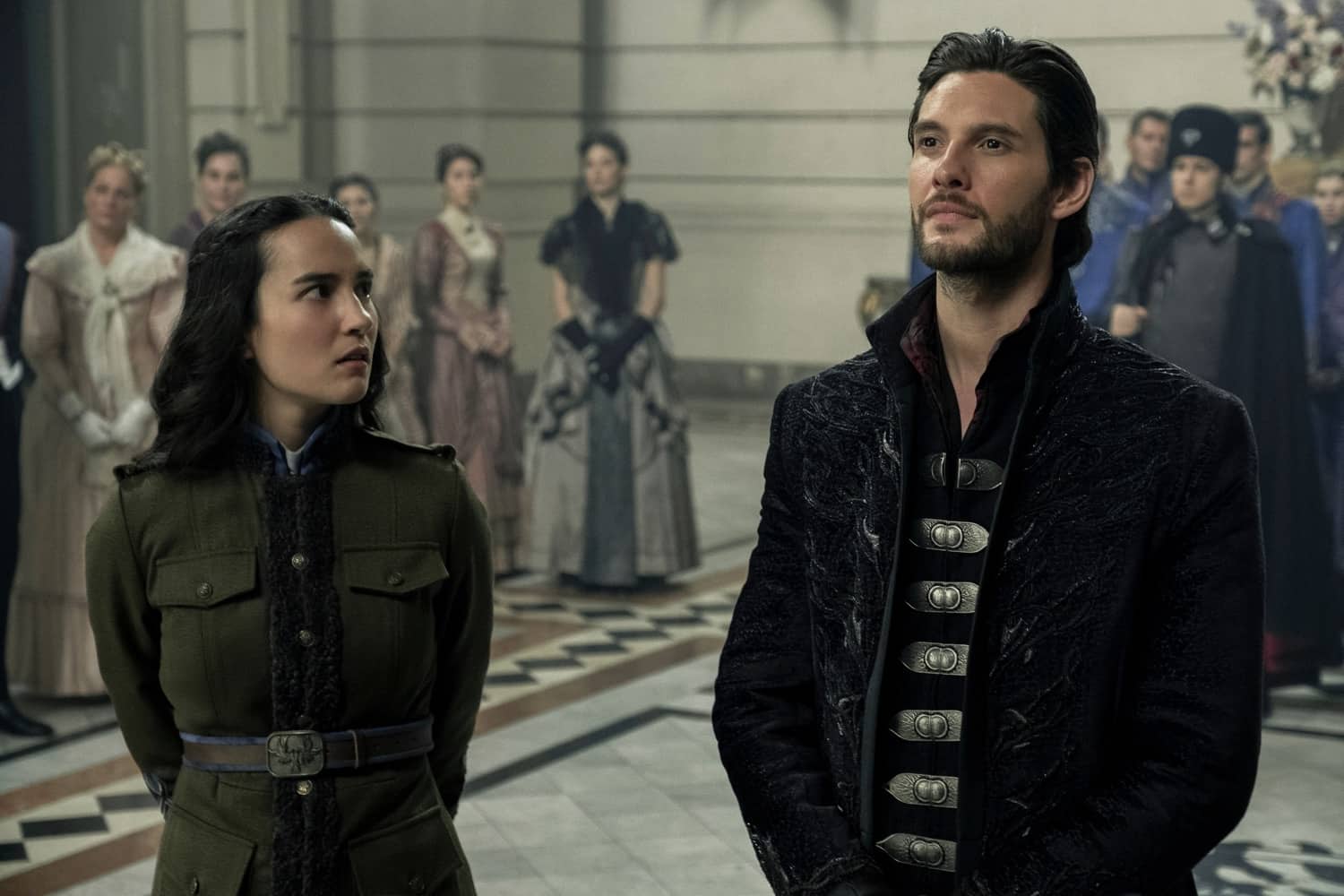 Netflix released the much-anticipated SHADOW AND BONE this past Friday, based on the best-selling Grishverse books by Leigh Bardugo. The eight-episode first season combines elements of multiple books set in the universe, primarily Shadow and Bone, following a young woman with hidden magical abilities, and characters from Six of Crows, about a gang of thieves. I have not read any of the books in the series, so my review comes from a perspective of just evaluating the show on its own, rather than how it does or does not follow the novels.

SHADOW AND BONE is a young adult fantasy series, a popular genre. Its darkness is more Game of Thrones than Harry Potter. Its world is harsh and deadly, and its villains are everywhere, holding lots of power and influence. In this society where wealth talks, it makes sense that the hero, Alina Starkov (Jessie Mei Li, All About Eve), is an orphan foreigner, outside the spheres that control things. Thus, it’s a classic tale of an outsider rising up and threatening the balance, a state that would be cheered by many a commoner, but the elite will stop at nothing to prevent.

Alina thinks she’s an ordinary cartographer, and her only concern in life is to stay near her best friend, Malyen “Mal” Oretsev (Archie Renaux, Voyagers). Thus, when Mal is assigned to go through The Fold, a dark, deadly, magical realm that divides their country in two, Alina is determined to go with them. Though her machinations mean her whole unit must endure the danger. Good thing she doesn’t seem to care about them much, because they are soon torn asunder, which is when Alina’s superpowers reveal themselves, saving much of the group in unexpected fashion.

The events described above trouble me for several reasons. Alina is supposed to be the hero of SHADOW AND BONE, yet she shows non consideration for the lives of almost anyone else. Yes, a hero’s journey often finds them overcoming their failings, but to have a hero who is so self-involved to the point where many of her comrades are just canon fodder is pretty bad upon any examination. Also, the problems in The Fold start when a young man lights a lantern, drawing attack. Which begs the question, given the obviousness of the mistake and its big implications for the crew, why even carry a lantern? And if there’s a good reason to do so, why was it not drilled firmly into the heads of the travelers not to light it? It was mentioned once, and given the disaster that follows, that wasn’t nearly enough.

Alina’s display of light, outing her as a mythological Sun Summoner, draws the attention of General Kirigan (Ben Barnes,Westworld), who wants to use her for his own purposes. It also propels a gang of thieves, Kaz Brekker (Freddy Carter, Free Rein), Inej Ghafa (Amita Suman, The Outpost), and Jesper Fahey (Kit Young, National Theatre Live: Julius Caesar). Initially these three are on their own plot thread, but soon enough seem destined to be drawn into the central one. This rounds out the central cast.

The world portrayed in SHADOW AND BONE seems both relatively small and not explained enough in the first couple of episodes. We know the country is divided in half by a magical realm which hasn’t always been there, and they can’t go around it because of enemies in the north and mountains in the south. Other than that, it’s not completely clear what other nations play a part and how, though there are definitely others. The series could have benefitted with a prologue better explaining the locations in which this story is set.

Other than that, I found it a bit bland. It looks fantastic, to be sure, but I wasn’t excited or drawn in. Some of the characters are charming, but not enough of them to make the series compelling. They lack the complexity of GoT or other similar offerings. I find myself struggling to care what happens, or even understand the implications of everything going on. It’s confusing and doesn’t have the magnetism required to motivate figuring it out. I have a feeling readers of the series, who already know the universe, will enjoy this a lot more, but for the newbie who isn’t already familiar, it’s confusing and a bit boring. I don’t think I’ll be finishing the season.

SHADOW AND BONE is streaming now on Netflix.