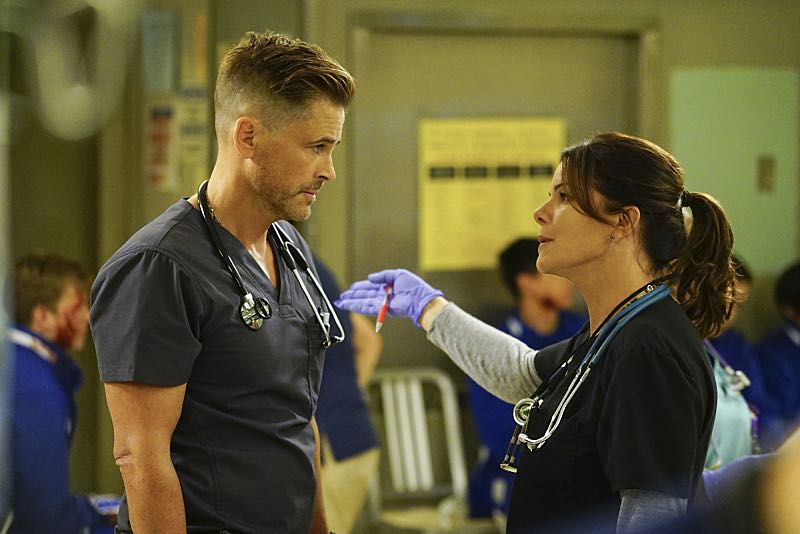 CODE BLACK is a heart-pounding medical drama that takes place in the busiest, most notorious ER in the nation, where the staggering influx of patients outweigh the limited resources available to the extraordinary doctors and nurses whose job is to treat them all – creating a condition known as Code Black. At the heart of the ER is Dr. Leanne Rorish, a stop-at-nothing residency director whose job is to save lives in an often-impossible environment. She is in the process of adopting a teenage girl named Ariel, and she is known by the group of residents as “Daddy.” Joining her is Col. Ethan Willis, who focuses now on field medicine, working on an ambulance or chopper with his ride-along partner, Rox Valenzuela, a tough and fearless paramedic. Both Leanne and Ethan work under – and sometimes against – the iron hand of ER and OR director Dr. Will Campbell, a top-tier surgeon. When the residents need a shoulder to cry on, they turn to senior ER nurse Jesse Sallander, known to them as “Mama,” whose stern hand guides them. Mama’s “children” include third-year residents Dr. Angus Leighton and Dr. Mario Savetti and second-year residents Dr. Noa Kean and Dr. Elliot Dixon. Dr. Rollie Guthrie is the avuncular, wise grandfather to all. At Center Stage, life is measured in seconds, and these heroic doctors and nurses operate with speed and skill within an overwhelmed system to heal people who are often there for one of two reasons: to die or to receive a life-saving miracle.