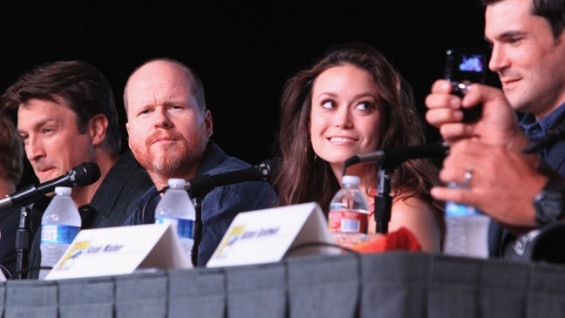 SCIENCE today announced that it will descend upon the east coast’s ultimate comics and pop culture convention with three exclusive panels at this year’s New York Comic Con, taking place October 11-14.  Headlined by the exclusive sneak peek of the definitive FIREFLY reunion event BROWNCOATS UNITE, the network’s appearance at this event features a star-studded lineup of top talent, producers and never-before-seen footage, along with numerous buzz-worthy surprises.  SCIENCE also will present for a panel STUFF YOU SHOULD KNOW with podcast kingpins, Josh Clark and Chuck Bryant, who will investigate the magic behind comic book movies. New York’s favorite masters of the macabre ODDITIES also will make their mark with a show-and-tell NYCC won’t soon forget.

On Saturday evening, October 13, the IGN Theater at the Javits Center will be the place for all things shiny and the site of one big FIREFLY reunion party.  Since making its debut on SCIENCE in 2011, the show has become an audience favorite, attracting an army of both new and veteran fans of the Joss Whedon series to the network.  It has been 10 years since the crew of the Serenity took flight and now SCIENCE will give New York Comic Con an exclusive sneak peek at FIREFLY 10th ANNIVERSARY: BROWNCOATS UNITE making its world premiere on Saturday, November 11 at 10 PM ET/PT.  From behind-the-scenes with those directly involved to never-before seen footage, SCIENCE is going to have something for both old and new fans alike.

STUFF YOU SHOULD KNOW’s own genius generalists Josh Charles and Chuck Bryant make their freshman New York Comic Con appearance to record a live edition of their top-10 downloaded HOW STUFF WORKS podcast.  They will lead Comic Con’s fans in the 360-degree the History of Comic Book Movies with surprise guests and exclusive giveaways, the guys also will reveal hidden scenes from their upcoming SCIENCE series STUFF YOU SHOULD KNOW, premiering in January 2013.

NYCC was buzzing last year with the appearance of the cast from one of SCIENCE’S most popular shows, ODDITIES.  This year, join Mike Zohn, Evan Michelson and Ryan Matthew as they open the door to their famed East Village antique shop, Obscura, for the most extreme form of show-and tell.  These purveyors of the peculiar will unveil a sneak peak of their upcoming season, holiday specials and reveal to fans some of their most bizarre finds exclusively to the New York Comic Con audience.

“We are the network that puts the “science” in “science fiction.”  SCIENCE had a great experience at New York Comic Con last year and we’re turning up the volume with a mind-blowing lineup of smart, lean-forward programming and panels that will shake up the fans at NYCC,” says Debbie Adler Myers, General Manger and Executive Vice President of SCIENCE.

“This is a great line up of guests and panels and we are grateful to SCIENCE for providing this awesome programming at our show,” notes Lance Fensterman, Group Vice President and Show Manager for New York Comic Con.   “The pop culture universe is ever expanding and NYCC is intent on including everything that may be of interest to the pop culture fan.  I am happy that SCIENCE sees so much value in our show and I look forward to making their participation a huge success.  We will have thousands of fans eager to catch these great panels.”

SCIENCE PANELS AT NEW YORK COMIC-CON 2012
Friday, October 12
STUFF YOU SHOULD KNOW With Josh & Chuck: The History of Comic Book Movies
Time: : 6:45 PM – 7:45 PM
Location: 1A21
In the beginning, comic books that were turned into movies sucked. Fortunately for us, Hollywood’s motto when it comes to bringing superheroes to life is try, try again. What’s resulted is an evolution in sophistication of not just effects, but also a deeper understanding of the characters themselves. Join Science Channel and HowStuffWorks’ Josh Clark and Chuck Bryant, hosts of the Top 10 iTunes podcast, Stuff You Should Know, as well as a few surprise guests, as they explore the campy beginnings of comic book movies, from Batman to today’s mind-blowing super-realism of Watchmen and The Dark Knight. Audience participation is expected – especially to collect limited edition New York Comic-Con exclusive giveaways from Science Channel.

Saturday, October 13
ODDITIES ANTIQUE ROAD SHOW
Time: 2:45PM – 3:45PM 1A08
Join the cast of Science Channel’s hit series Oddities, Evan Michelson, Mike Zohn, and Ryan Matthews as they appraise some of their most macabre, bizarre and obscure items.  They will open the doors of their famed East Village shop Obsucra Antiques and Oddities, the Big Apple’s epicenter of the eccentric, pop culture’s Mecca of the macabre to New York Comic Con for the first time, to interact with fans to talk about what’s in store for their new season.  Surprise guest appearances and exclusive footage as well as NYCC giveaways will be on hand.  Join the purveyors of peculiarities Evan, Mike and Ryan, where weird is the new normal.

Saturday, October 13
FIREFLY TENTH ANNIVERSARY SPECIAL EVENT: FIRST LOOK!
Time: 6:15PM-7:15PM
Location: IGN Theater
Capacity: 3000
It has been 10 years since the crew of the Serenity took flight in Joss Whedon’s short-lived but now infamous show FIREFLY.  SCIENCE will give New York Comic Con an exclusive sneak peek at their 10th Anniversary Special Event making its world premiere on 11/11/12.  From behind-the-scenes with those directly involved to never-before seen footage, SCIENCE is going to have something for both old and new fans alike.  Captain ‘Mal’ Reynolds and the crew from the ship are calling all Browncoats to unite at the 2012 New York Comic Con.  Special surprise guests and exclusive New York Comic-Con giveaways are just the beginning.