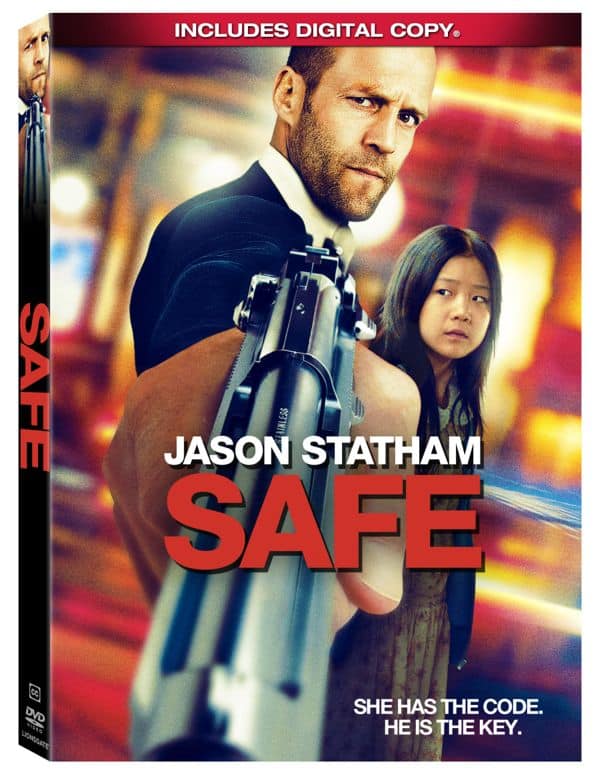 Seat42f and Lionsgate have teamed up to give THREE lucky winners a copy of SAFE on DVD. For a chance to win leave a comment below telling us why you want to add SAFE to your DVD collection. Only one entry per person. Contest ends September 20th. Winners will be notified on September 21st via email so make sure to use a valid email address when you post your comment.

New York City can be a dangerous place, but it turns out the most wanted individual is a 12-year-old girl. From the director of Remember the Titans and producer of Kill Bill and Inglourious Basterds comes the adrenaline-charged crime thriller, Safe, arriving on Blu-ray Disc (plus Digital Copy), DVD (plus Digital Copy), Digital Download and On Demand on September 4, 2012. Everyone’s favorite action hero, Jason Statham (The Expendables), gives an exhilarating performance as Luke Wright, a mixed martial arts cage fighter who comes to the rescue of a terrified young girl on the run from the city’s most dangerous gangsters.

Luke Wright (Statham) was living a normal life as a second-rate mixed martial arts cage fighter until screwing up a rigged fight. The Russian Mafia decides to make an example of him to prevent this from happening again and murders his family. With nothing to live for anymore, Wright wanders the streets of New York full of guilt and anger until he encounters Mei (Catherine Chan), a frightened 12-year-old Chinese girl. An orphaned math prodigy, Mei had been forced to work for the Triads as a counter and holds the key to a numerical code that could destroy the Triads, the mob and corrupt cops within the NYPD. After discovering that the same gangsters who killed his family are pursuing her, Wright takes matters into his own hands to protect the innocent girl and seek revenge.