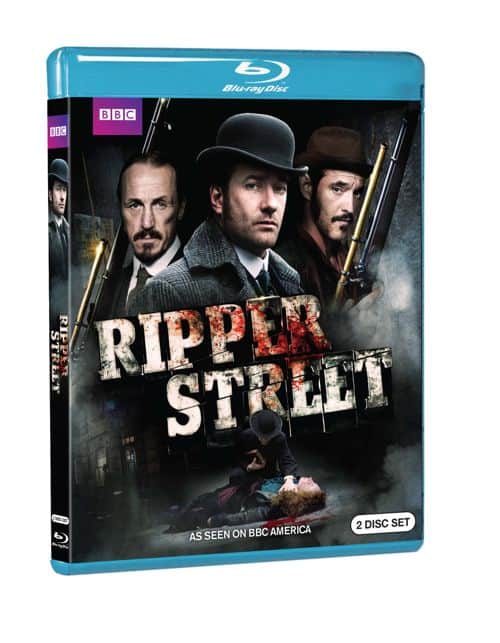 Seat42f and BBC Home Entertainment have teamed up to give THREE lucky winners a copy of RIPPER STREET Season 1 on BLURAY. For a chance to win leave a comment below telling us why you want to add RIPPER STREET Season 1 to your BLURAY collection. Only one entry per person. Contest ends March 26th. Winners will be notified on March 27th via email so make sure to use a valid email address when you post your comment.

BLURAY/DVD RELEASE DATE : March 12th, 2013
Haunted by the failure to catch London’s most evil killer, Jack the Ripper, Inspector Edmund Reid now heads up the notorious H Division – the toughest police district in London’s East End. Charged with keeping order in the blood-stained streets of Whitechapel, Reid and his men find themselves fighting to uphold justice and the rule of law; but always in the background lurks the fear of the Ripper – is he back for another reign of terror? As imitators emerge and feral gangs terrorize, Reid and his team are further drawn into the criminal underbelly of Victorian London – and their vigilance must be swift to stop those that threaten the calm of the city. Starring Matthew Macfadyen (Anna Karenina, Pride and Prejudice), Jerome Flynn (Game of Thrones), Adam Rothenberg (Alcatraz) and MyAnna Buring (Downton Abbey, The Twilight Saga). The hit series premiered in January on BBC AMERICA to critical acclaim and will return with a second season in 2014. The Los Angeles Times says Ripper Street “opens with chilling promise and ends on a decidedly modern note,” and The Hollywood Reporter says it’s a “well-acted, well-written, and compelling mystery series.” Bonus features include: 3 Inside Looks from the cast and production team; Character Profiles; “London Calling: Whitechapel,” a tour of modern Whitechapel; and “Jack the Ripper: Prime Suspect”- can modern forensic science finally solve the case of Jack the Ripper?