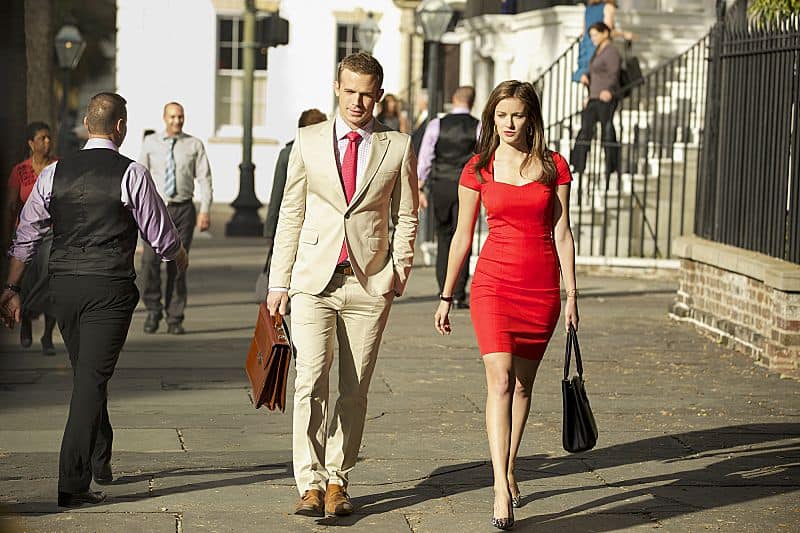 CBS has a new crime series, which premiered tonight, called RECKLESS. Masquerading as a typical cop or lawyer show, it’s a combination of both, mixed with a heavy dose of soapy drama. There are short-run cases, such as the one in the pilot, but there is also a bigger arc involving a departmental scandal which will likely play out over the course of the summer. Everyone has secrets, and the draw will be in wondering what twist will come next.

RECKLESS is not a high-quality show. You won’t find many of those on the broadcast networks, and certainly not during the summer. But it’s a smart move for CBS to move beyond standard procedurals and try something more salacious, a la ABC, especially during the warm months when many TVs are turned off. I do wonder why the network chose Sundays to air it, though, since that’s the night of the week with the most competition, and while RECKLESS is enjoyable, it’s doubtful it can compete with the likes of True Blood and Falling Skies.

On most shows these days, the police are the good guys. We might find a bad seed or two among the contingent, but rarely is there a widespread issue within the force, unless it’s a really meaty, intense drama, which this show is not. RECKLESS is different in that most of the boys in blue in Charleston are not on the up and up. Whether sleeping with fellow officers or covering up for their buddies that do, there is much to loathe in this unit, and little to admire.

Jamie is the main woman we’re supposed to root for, but she’s not exactly pure. She thinks nothing of bending, or even outright breaking, the rules in order to win her case. She may have noble intentions, or so we’re left to assume, but that doesn’t mean she can’t get in trouble, and perhaps she should. Even when she is framed for a minor crime in this episode, one has to wonder if she’s just serving time for something else she did but didn’t get caught.

There is room for some debate over RECKLESS’s portrayal of women. Lee Ann steps across the line of her own free will, and her punishment is justified. The problem at hand is that the rules are not applied equally across the board. The good ol’ boys of the south stick together and feel above the law. So in a situation where no one has done right, can we blame one party more than the other? Yes, but not completely, making it hard to really care about too many of the players.

Of course, besides all the legal and cop stuff, there’s plenty of room for romance. Jamie smolders whenever she encounters city attorney Roy Rayder (Cam Gigandet, The O.C.), but she also has regular hookups with Preston Cruz (Adam Rodriguez, CSI: Miami), who dons the uniform. Jamie can’t help but shit where she eats, like most TV characters, and so causes much of her own trouble.

If you’re looking for a sexy guilty pleasure show that’s entertaining but doesn’t make you think too hard, RECKLESS should fit that bill fine. That it’s a notch or two better than CBS’s regular season fare, The Good Wife excepted, may surprise and impress, but it still runs behind its cable counterparts.