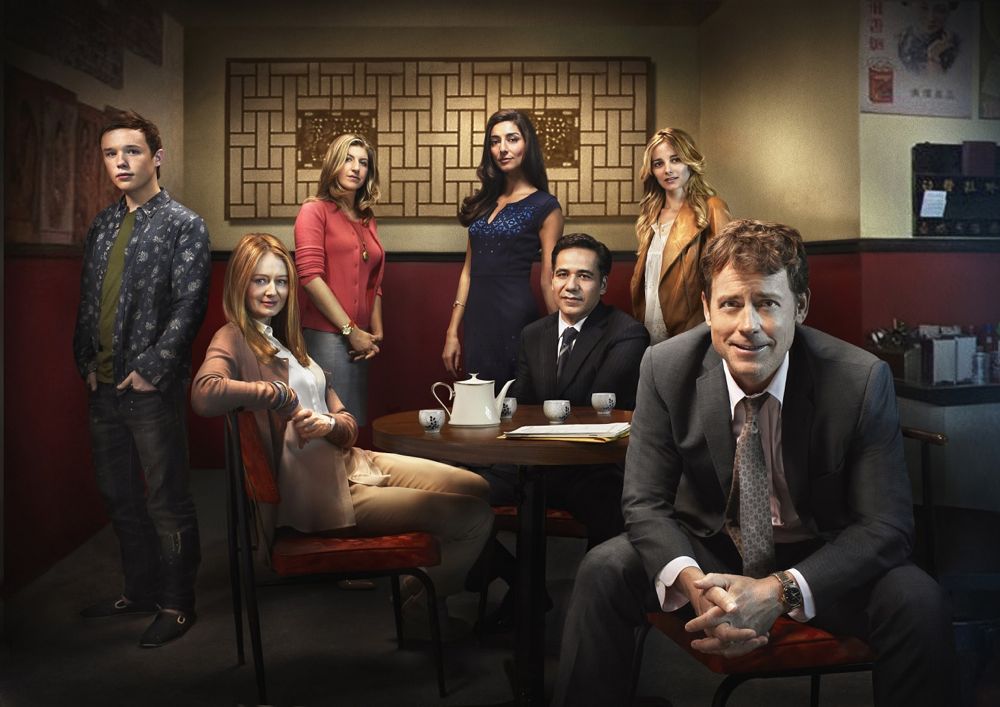 FOX’s latest drama is RAKE. The series title actually does not refer to a person’s name, but rather the old-fashioned term for a man who often acts in an immoral manner and causes all sorts of trouble. In the original Australian version, which this new series is based on, the main guy is named Rake. Credit this series for a bit of subtlety for not following in those ill-begotten footsteps.

Greg Kinnear (Little Miss Sunshine) is the lead, playing Keegan Deane, a defense attorney deeply in debt and who keeps digging his hole deeper. Forced to crash with his friends, former roomie Ben (John Ortiz, Luck), his wife, prosecutor Scarlet (Necar Zadegan, 24), and their three children, Keegan can’t even keep his driver’s license current of his car in his possession.

Things go from bad to worse very early in the pilot, “Serial Killer.” Playing poker in the hopes that he can use his winnings to pay off a bookie whose henchman, Roy (Omar J. Dorsey, Django Unchained), is pressuring him to fork over fifteen grand or else, Deane is rewarded with a loser case and a giant tuna fish that rates a ‘2,’ for those who know of such things. Toss in an ex-wife, Maddy (Miranda Otto, Cashmere Mafia), and a crooked cop (guest star Bill Smitrovich, The Practice), and Keegan has his hands full.

“Serial Killer” is hilarious. Every time you expect Keegan to get a break, just a toehold on getting by, he fails to do so. He is the world’s unluckiest man, and his behavior does not help, painting himself as his own worst enemy. The comedy of errors may be something difficult to keep up week after week, but for the first hour, it roars along as a brisk pace, getting wilder and more entertaining as it goes.

[quote text_size=”small”]Kinnear is fantastic, as one would expect. A seasoned actor, he’s already earned his chops numerous times over. RAKE is a well-deserved showcase of his talent, giving him plenty of meaty material to devour in a part that could easily be very unlikeable if not delicately handled. He mines the pathos of the cad, and even when Keegan is making mistakes, which is often, one feels really bad for him.[/quote]

Part of the reason viewers can be sympathetic to Keegan is the loyalty of his put-upon assistant, Leanne (Tara Summers, Boston Legal). He’s way overdue in paying her, too, but she sticks by him. She seems like a kind, decent woman who is not in love with him, so if she can find something noble and good in Keegan, it’s got to be there, buried deep, right? Plus, Ben, Scarlet, and their family keep forgiving him, so…

RAKE seems to be following the proud tradition of House and other, lesser dramas that bank on one character. The supporting players, while fine, are only there because they relate to the main guy, mainly in how he uses them for his own purposes. But like Hugh Laurie, Greg Kinnear has the ability to carry the show, and hopefully be a compelling character study in his own right, interesting because of, not despite, his flaws.

I do worry that RAKE will be a traditional procedural. There’s likely some element of that in the long-term plan, with Keegan finishing off his initial case by the end of “Serial Killer.” Luckily, there’s a lot more development for Keegan than his client here, which makes the episode better than the typical formulaic drama. We’ll have to see what kind of balance is struck, whether most weeks will rely more heavily on a fleeting story or long-term plot, before it can be determined if this is a show to watch.

Whether RAKE becomes a hit of a forgotten footnote, the first episode is very enjoyable, and that’s enough for now. I definitely recommend checking it out when it premieres this Thursday at 9 p.m. EST on FOX.