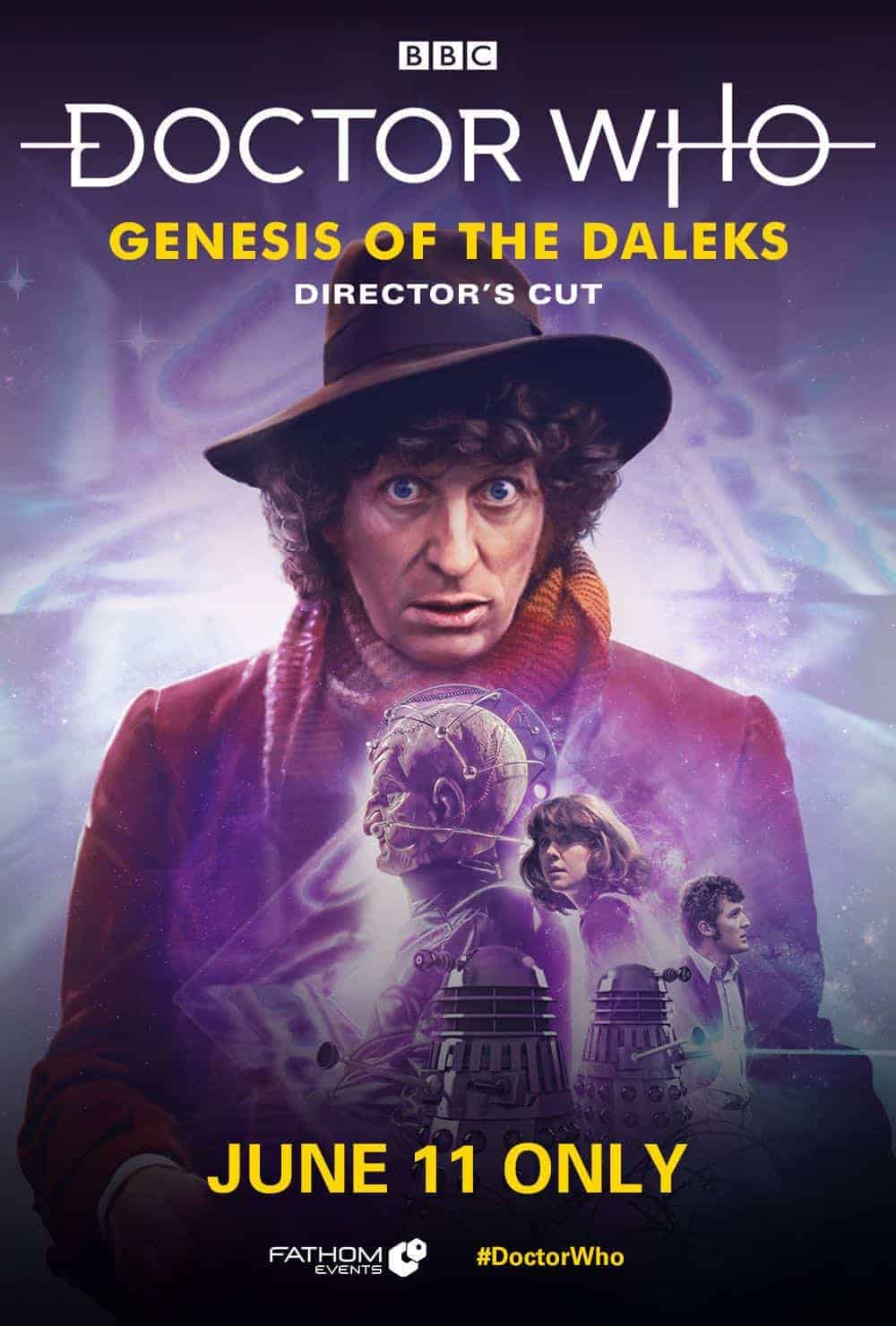 BBC Studios – Americas and Fathom Events are partnering to present the never-before-seen, 90-minute director’s cut of the hugely popular classic Doctor Who adventure, “Doctor Who: Genesis of the Daleks,” for a special one-night event on Monday, June 11 at 7:00 p.m. local time in more than 750 select movie theaters nationwide through Fathom’s Digital Broadcast Network (DBN). An exclusive interview with the Fourth Doctor, Tom Baker will follow this special version.

Tickets for “Doctor Who: Genesis of the Daleks” can be purchased at www.FathomEvents.com or participating theater box offices. For a complete list of theater locations, visit the Fathom Events website (theaters and participants are subject to change).

The Fourth Doctor and his companions Sarah Jane Smith and Harry Sullivan are transported thousands of years into the past to the ancient planet Skaro where they are given a mission from the Time Lords to prevent the evil scientist Davros from introducing to the universe the most destructive race of killing machines ever created, the Daleks!

“We are excited to work with our long-standing partners at BBC Studios to bring our 17th joint cinema event, ‘Doctor Who: Genesis of the Daleks,’ to movie theaters across the U.S. and for fans to see Tom Baker on the big screen,” Fathom Events CEO Ray Nutt said. “Our Doctor Who events are always a great opportunity for Whovians to gather at the cinema and experience their favorite content together.”

“We continuously strive to provide special moments for Doctor Who fans and we think this is a really fun and unique opportunity to see the popular Fourth Doctor, Tom Baker in ‘Doctor Who: Genesis of the Daleks’ while surrounded by other Whovians in a theater setting,” stated Julie Dill, VP Franchise Marketing, Creative, and Partnerships, BBC Studios – Americas.

BBC Studios – Americas
BBC Studios, a global content company with British creativity at its heart, is a commercial subsidiary of the BBC. Formed in April 2018 by the merger of BBC Worldwide and BBC Studios, it spans content financing, development, production, sales, branded services, and ancillaries. BBC Studios’ award-winning British programs are internationally recognized across a broad range of genres and specialties. It has offices in 22 markets globally, including six production bases in the UK, and a further seven wholly-owned and production partnerships internationally. The company, which makes over 2,500 hours of content a year, is a champion for British creativity around the world and a committed partner for the UK’s independent sector.

In the Americas, BBC Studios’ production unit in Los Angeles is responsible for ratings juggernaut Dancing with the Stars, critically-acclaimed The Night Of, and award-winning Life Below Zero, while local productions Dancing Brasil and Bake Off Brasil are breakout hits made in Brazil. The company manages joint venture relationships with AMC Networks for flagship channel BBC AMERICA (U.S.) – home of global brands Planet Earth II, Blue Planet II, Doctor Who, and Top Gear – and with ITV for SVoD service BritBox (U.S./Canada), as well as strategic partnerships in Canada with Blue Ant Media for BBC Earth Channel, Corus for BBC Canada, and Knowledge Network for BBC Kids.

About Fathom Events
Fathom Events is the leading event cinema distributor with participating theaters in all 100 of the top Designated Market Areas®, and ranks as one of the largest overall distributors of content to movie theaters. Owned by AMC Entertainment Inc. (NYSE: AMC), Cinemark Holdings, Inc. (NYSE: CNK) and Regal Entertainment Group (NYSE: RGC) (known collectively as AC JV, LLC), Fathom Events offers a variety of one-of-a-kind entertainment events in theaters such as live performances of the Metropolitan Opera, top stage productions including Newsies! The Broadway Musical and George Takei’s Allegiance, major sporting events such as Mayweather vs. McGregor, epic concerts with artists like Lady Antebellum and Sammy Hagar, the yearlong TCM Big Screen Classics series, inspirational events such as Is Genesis History? and IN OUR HANDS: The Battle for Jerusalem, and popular anime franchises like Pokémon and Dragon Ball Z. Fathom Events takes audiences behind the scenes for unique extras including audience Q&As, backstage footage and interviews with cast and crew, creating the ultimate VIP experience. Fathom Events’ live digital broadcast network (“DBN”) is the largest cinema broadcast network in North America, bringing live and pre-recorded events to 917 locations and 1,440 screens in 181 DMAs. For more information, visit www.fathomevents.com.