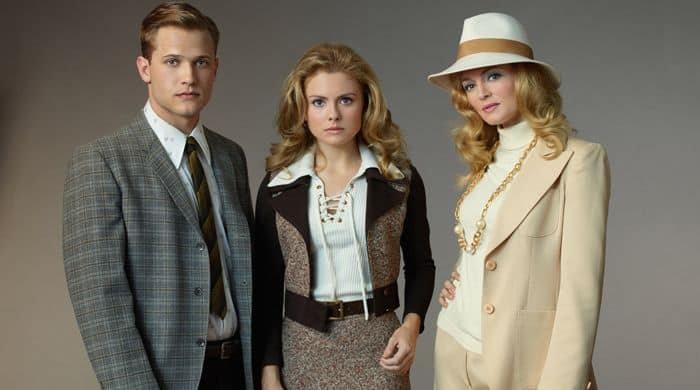 This weekend, Lifetime presents PETALS ON THE WIND, a television movie that serves as a sequel to last year’s Flowers in the Attic. It’s been ten years and the Dollanganger children are still trying to escape the secrets of their past. Their family is full of horrors that they haven’t shaken themselves of yet, and as the tale unfolds, they are drawn deeper into the web of incest and betrayal.

Each of the three surviving siblings have a large role to play in PETALS ON THE WIND, weaving three separate stories, even though they remain close, having been taken in by a kindly old man who has passed away as the film begins. Their current stories are built off of what came before, personalities shaped by neglect, abuse, and imprisonment, damaged people who will probably never be whole again.

All three kids have been recast, which makes sense, given their age differences in the two productions, while the adult actors reprise their roles. It’s a little weird at first to adjust, as there are very few through lines between the two, making the characters seem like completely different people. Then again, kids change a lot from teenagers into their twenties or childhood to teens, so I guess it makes sense that the newbies only bear a passing resemblance to the old.

The story this time around doesn’t feel as intense or moving as the first movie. I think a lot of this is because of the sprawling setting. In Flowers in the Attic, the children are confined to one place, with tension building over time. This is effective storytelling, and that element is now removed, the Dollangangers going out into the world. As such, I don’t feel that PETALS ON THE WIND is as effective as its predecessor.

That being said, there is a continued theme of being trapped. While no longer physically imprisoned, none of the three has been able to find their freedom. They are hemmed in, emotionally, sexually, and morally, by their mother, Corrine (Heather Graham), and grandmother, Olivia (Ellen Burstyn), even if they don’t see them. In this, there is a continuation of arrested development that is intriguing, even if the overall presentation is more melodramatic and less compelling.

Near the start, Cathy (Rose McIver, Once Upon a Time, Masters of Sex) moves to New York with new beau Julian Marquet (Will Kemp) to become a professional ballerina, only to find a life much departed from young girls’ fantasies of such. Of course, she keeps being drawn back to her siblings and her home. Cathy is the one most like Corrine and Olivia, I believe, which will be seen as the story plays out. It is up to the individual viewer to judge whether she is applying the harsh life lessons she learned justly or continuing a cycle of cruelty. I believe there is a case to be made for both.

Meanwhile, Christopher (Wyatt Nash, Hollywood Heights) is finishing medical school. His boss, Dr. Reeves (Nick Searcy, Justified), has a daughter, Sarah (Whitney Hoy, The Final), who is quite taken with Christopher, a good looking, intelligent young man. In the Reeves family, Christopher has the chance to leave his past behind and build a normal existence, with a respectable wife and kids. Can he get over his illicit feelings for Cathy and do it?

Then there’s Carrie (Bailey Buntain, a veteran of Bunheads, though she doesn’t play the dancer in this one), who was too young for personality in Flowers in the Attic, but is now being tormented at high school and feeling left out of her older siblings’ bond. She is desperate for attention from just about anyone, including her mother, and yet, her thread is the least developed of the three, sadly, as there is something interesting going on here.

[quote]I do feel like PETALS ON THE WIND needs more time to really get its message across. The pacing zooms through two years and it bounces between the three characters, never serving any of them enough to make it seem like there’s much depth. We see their actions, but missing are the scenes of self-doubt and struggling with damaged minds. This story has great potential, and perhaps should have been a two-night miniseries, rather than a quick TV movie.[/quote]

It’s also regrettable that we get so much less of Graham and Burstyn this time. Burstyn, in particular, is a great actress, and while she does a lot with the little she’s given, she doesn’t really have her own plot in the sequel. With limited time, it makes sense to focus on the next generation, but I’d really like to see more of Corrine’s continued struggle against Olivia, as well as the chasm between the two women because of their shared misdeeds.

Overall, PETALS ON THE WIND is enjoyable, a bit better than most of what I’ve seen from Lifetime, but several steps below its potential. I don’t know if the network plans to continue making the other three books in the series, but I kind of hope so, provided they take steps to better care for the material the next time around.

PETALS ON THE WIND airs Monday at 9 p. m. ET on Lifetime.