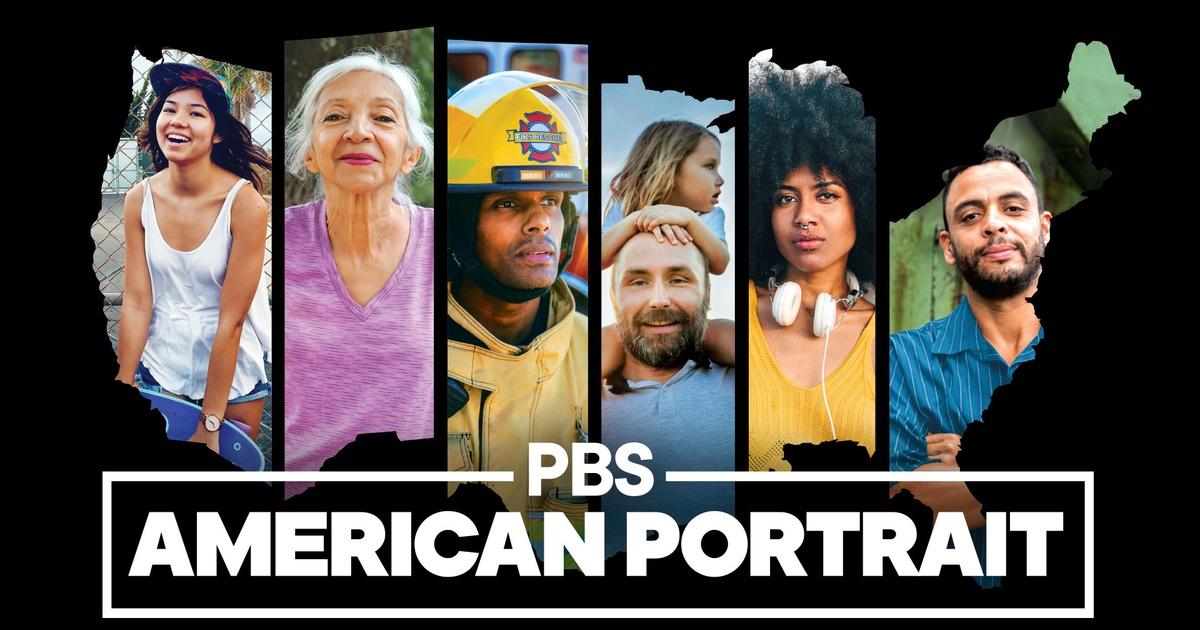 PBS, as part of its 50th anniversary crowdsourced storytelling project PBS AMERICAN PORTRAIT, today announced that its four-part documentary series, which captures the remarkable story of 2020 through the voices of everyday people from every U.S. state and territory, premieres on Tuesday, January 5, 2021, 9:00–10:00 p.m. ET (check local listings).

PBS AMERICAN PORTRAIT is the most ambitious multiplatform project in the organization’s history. Since it launched in January 2020, the PBS AMERICAN PORTRAIT website has collected more than 11,000 stories from people across America that, together, hope to answer the question: What does it really mean to be an American today? Millions of people visited the site throughout 2020 to explore user-submitted stories in response to a series of thought-provoking prompts and the events of 2020 in real time. These stories helped share the themes reflected in the four-part docuseries.

Produced by PBS and RadicalMedia, each of the four new hour-long programs blends stories filmed by everyday people to create a chorus of voices sharing both common and unique experiences from across the country. Each episode in the series focuses on a main theme—“I Dream,” about our varied pursuits of the American Dream; “I Work,” about the aspirations, struggles and satisfactions in our careers; “I Keep,” about the traditions and values we hold; and “I Rise,” about working to create an antiracist America. These experiences yield complex and diverse stories of what brings us together and what keeps us apart as we strive to understand one another.

“In many ways, PBS AMERICAN PORTRAIT has proven to be the perfect project for a year unlike any other. We’ve given voice to people and communities across America at a time when so many are hoping and needing to be heard. We’ve been honored to serve as a platform for people to share their stories, as it is in our mission to empower audiences to achieve their potential and strengthen their communities,” said Bill Margol, Executive in Charge of PBS AMERICAN PORTRAIT and Senior Director, General Audience Programming and Development at PBS. “In the new series, audiences will see and hear from people across America, and our hope is that their stories will inspire each of us to continue these conversations in our homes and communities, and to see that, while there are many things that still divide us, the commonalities we share can create the dialogue we need to bring us together.”

“In this time of crisis, we have been challenged in the way we interact with one another, yet, we’ve witnessed an incredible sense of bonding and empathy through the inspiring stories of families, friends and colleagues across the country,” said Jon Kamen, CEO of RadicalMedia and Executive Producer of PBS AMERICAN PORTRAIT. “These shared experiences from everyday people in America are the heart of our four-part series.”

The episode descriptions are as follows:

Self-shot stories explore the meaning and state of the American dream. From the desire for homeownership to ambitions for higher education or career success, they show the hard work, opportunities and barriers that come with pursuing this ideal today. The main stories featured are Mahsa A. from Fairfax, Virginia; Tyler M. & Bre R. from Joliet, Illinois; and Gunnar J. from Unalakleet, Alaska.

Everyday people share self-shot stories about their jobs and careers as they navigate the changes they’re experiencing and the goals they’re working toward. From teachers to truck drivers, they explore what it really means to work in America today. The main stories featured are D’Artanian D. & Jonathan E. from New Orleans; Jessica M. from Chula Vista, California; and Laura H. from Stillwell, Oklahoma.

People film themselves as they try to preserve or change traditions in their lives and communities. From struggling to protect culture to eliminating toxic legacies, it’s an intimate look at the practices we’ve inherited and the ones we’ll pass on. The main stories featured are Emma H. from Seattle; Yolanda B. from Dallas; and Dwight S. from St. Helena Island, South Carolina.

Go inside the lives of people working to create an antiracist American future. They film themselves doing the hard work, confronting the obstacles and achieving the small victories that could add up to real change in the movement for racial justice. The main stories featured are Christine H. from Austin, Texas; Anisa O. from Mankato, Minnesota; and Lex S. from Sandy, Utah.

Target is a major funder and national promotional partner for PBS AMERICAN PORTRAIT, expanding the reach of this initiative. Additional funding is provided by Anne Ray Foundation and the Corporation for Public Broadcasting.

PBS AMERICAN PORTRAIT was developed and created with RadicalMedia. Jon Kamen and Dave Sirulnick serve as Executive Producers, and Naomi Gilbert is the Senior Interactive Producer for the web platform. Craig D’Entrone is Executive Producing and showrunner on the project. Michèle Stephenson is Series Producer. Bill Margol is the Executive in Charge for PBS.

About PBS AMERICAN PORTRAIT
Launched on January 10, 2020, PBS AMERICAN PORTRAIT, a national storytelling project aligned with PBS’s 50th anniversary celebration, is the organization’s most ambitious multiplatform project in its history. A digital-first initiative produced with RadicalMedia, AMERICAN PORTRAIT began by engaging Americans to share their experiences, hopes and values on the web platform. The project evolved to include a digital miniseries titled SELF-EVIDENT; several public art installations and murals in neighborhoods across America; educational materials on media and storytelling from PBS LearningMedia; and three broadcast specials that aired throughout 2020. In addition, hundreds of videographers across the country collected submissions from their respective communities, helping to grow the reach of the project. The project will also put forth a published book following the release of the highly anticipated four-part documentary series. Leveraging the local reach of PBS through its member stations, PBS AMERICAN PORTRAIT presents a mosaic of our country’s diversity by connecting tens of thousands of people across the country, creating a communal voice through individual stories of joy, hardship, triumphs and sorrow. Participants tell and share their own stories, and see the stories shared by a wide panorama of people across America, united by a series of prompts that will serve as conversation starters, including: “I was raised to believe…,” “The tradition I carry on is…,” “What keeps me up at night is…,” “When I step outside my door…” and “Most days I feel…,” among others like, “I never expected…,” added in response to COVID-19, “Now is the time…” added to encourage people to share their stories about race in light of the events of the summer. The prompts “Now is the time…,” “My American dream…,” “To me, work means…,” “My life right now…,” and “I stand for…” were added more recently to collect submissions for the upcoming PBS AMERICAN PORTRAIT docuseries.

inviting them to experience the worlds of science, history, nature and public affairs; to hear diverse viewpoints; and to take front row seats to world-class drama and performances. PBS’s broad array of programs has been consistently honored by the industry’s most coveted award competitions. Teachers of children from pre-K through 12th grade turn to PBS for digital content and services that help bring classroom lessons to life. Decades of research confirms that PBS’s premier children’s media service, PBS KIDS, helps children build critical literacy, math and social-emotional skills, enabling them to find success in school and life. Delivered through member stations, PBS KIDS offers high-quality educational content on TV— including a 24/7 channel, online at pbskids.org, via an array of mobile apps and in communities across America. More information about PBS is available at www.pbs.org, one of the leading dot-org websites on the internet, or by following PBS on Twitter, Facebook or through our apps for mobile and connected devices.

About RadicalMedia
RadicalMedia produces premium content across all media platforms. With offices in New York, Los Angeles, London, Berlin, and Shanghai, RadicalMedia is a global media and communications company that creates and produces television, feature films, commercials, live events and interactive design. RadicalMedia is fluent in each and every discipline of storytelling, with accolades that include Oscar ®, Emmy ®, Peabody ® and Grammy ® Awards. Noteworthy programming includes Netflix’s first original documentary film, the Oscar-nominated and Emmy-Winning What Happened, Miss Simone?; Academy-Award Winning The Fog of War; Paradise Lost; Hamilfilm for Disney+; Hamilton’s America and In The Heights for PBS; History Channel’s number one miniseries of all time, GRANT; Black Woodstock, directed by Ahmir “Questlove” Thompson, Untitled Mental Health series with Oprah Winfrey and Prince Harry for Apple TV+, Jeffrey Epstein: Filthy Rich for Netflix; The multi-platform project; PBS’ American Portrait, National Geographic’s Activate: A Global Citizen Movement; and David Byrne’s American Utopia, directed by Spike Lee, coming to HBO later this fall. Check out the latest work on Instagram and at www.radicalmedia.com.