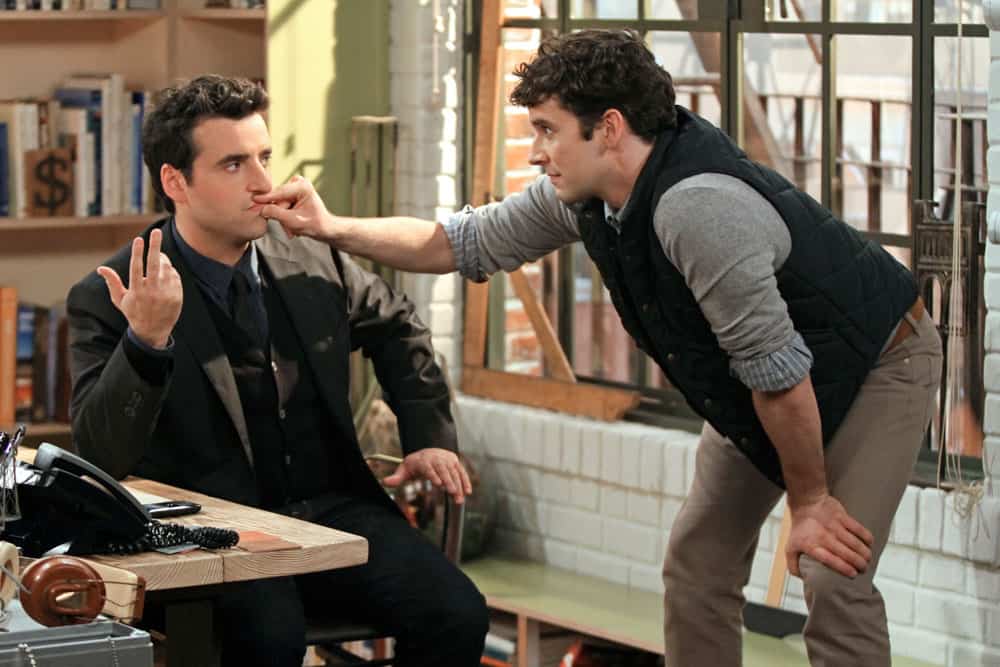 CBS has a new sitcom from the creators of Will & Grace. Called PARTNERS, the show is about two male best friends, one gay, one straight, who have been together through it all. They started out as childhood friends, and now design buildings together. Michael Urie (Ugly Betty) plays Louis, the gay one, who thinks far too frequently about himself. David Krumholtz (Numb3rs) is Joe, the straight one, who may finally be ready to settle down and get married.

In the “Pilot,” Joe is ready to break up with his girlfriend, Ali (Sophia Bush, One Tree Hill), when she gives him an ultimatum: put a ring on it or else. Joe doesn’t like being pressured. Louis tells him to listen to his gut, and Joe agrees. But when Joe goes to Ali to end things, she preempts his prepared speech by apologizing for her words the other day, assuring him that she isn’t trying to pressure him into anything that he’s not ready for, and affirming that she loves him. This attitude totally changes Joe’s mind, and he spontaneously proposes.

Unfortunately, Louis isn’t aware of this when he runs into Ali the next day at yoga, and accidentally lets it slip that Joe had been planning on breaking up with her. This not only ruins Ali and Joe’s relationship, but also causes Joe to freeze Louise out… permanently.

I have a big problem with this entire scenario. Is Ali and Joe’s relationship really so rocky that both consider calling things off? If so, how does that possibly make them ready to tie the knot? These totally opposite attitudes are not the makings of a healthy marriage, even if they are a staple of mediocre sitcoms. Solving emotional problems this severe between a couple neatly in half an hour can take viewers out of the fantasy, hurting the overall impression of the series.

Even worse is Joe’s decision to cut Louis off completely. This is his best friend whom he has known since they were little kids. First of all, why didn’t Joe call Louis to tell him the good news the night he proposed, considering how close they are? That’s what a normal person would do. Second, anger is fine, but to sever both professional and personal ties with him for a mistake that was understandable given the circumstances? It’s not an auspicious start.

PARTNERS has a very good cast. Krumholtz and Urie do a fantastic job as Joe and Louis, even if their chemistry is not one hundred percent solid yet, selling the parts as much as can be expected, given the material. Bush is also good, and I love Brandon Routh (Chuck, Superman Returns) as Louis’s ditzy boyfriend. Magic can happen with this excellent cast, all of whom have developed interesting personalities for their roles. Just give them something worthy of their performances.

The set, music, and tone are similar to Will & Grace. A couple of the performers get a bit cartoonish, in a fun way. There is a light heartedness that doesn’t take itself too seriously. In fact, when the series tries to dig too deep into drama is where it falls short. Making this a more recognizable comedy, not trying to push too much seriousness on it, would play to the strengths of those involved.

The fault with the “Pilot” seems to lie mainly in the writing. Reducing such characters to predictable, unrealistic situations will kill the series. Given that PARTNERS is by the Will & Grace people, it can probably recover, and maybe even turn into something great. The “Pilot” just does not live up to what any of the team on this show can do. Many good shows have sprung from bad first installments. Hopefully, PARTNERS will be one of them.