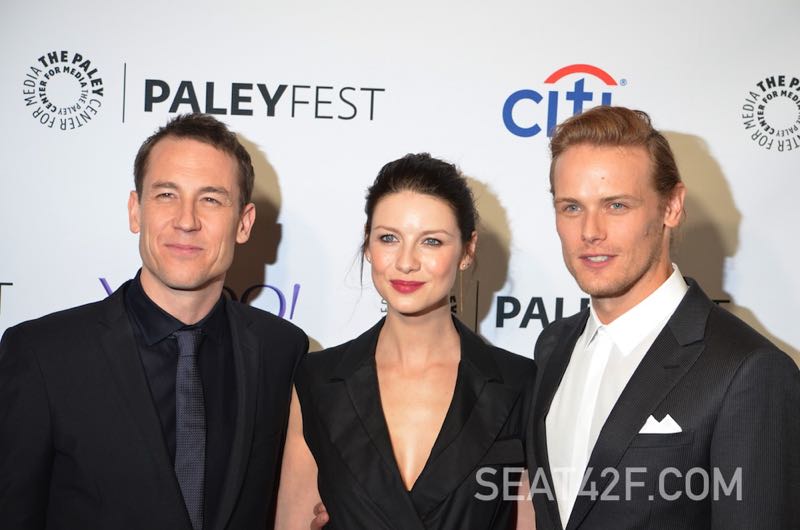 Returning April 4th for the second half of their first season, Starz’s breakout series OUTLANDER knows exactly how to get their fans attention.  At this year’s PaleyFest celebration, the show smartly debuted their upcoming new episode and to say that it got everyone a bit worked up is an understatement.  If it wasn’t the eye-popping sex scenes or the tense standoff with Black Jack Randall (Tobias Menzies), it was the heart-tugging and heart-wrenching scenes as Jamie (Sam Heughan) and Claire (Caitriona Balfe) laid bare their souls.

Fortunately, the panel after the special screening was a lively and joyous affair as the stars Sam Heughan, Caitriona Balfe, Tobias Menzies, along with executive producer Ron Moore and author Diana Gabaldon, good-naturedly participated in drinking games and cheekily teased with a wink-and-a-nod all the delicious storylines upcoming on the show.  Riding on the high of the first half of their freshman season, which managed to increased its viewership ten-fold with each episode, and sparked a social media firestorm, the OUTLANDER folks were just as delighted as their fans to be there.

The night started off with a rousing rendition of “never have I ever” (which was called “Ne’re Have I Eer” for the occasion) and the special guests happily participated, sheepishly taking a drink as they admitted to skinny-dipping or giggling during sex scenes during filming.  Tobias Menzies nearly brought down the house as he took a drink to that last one.  The impish grin on his face showed that he could have been teasing, but from the laughter by co-star Caitriona Balfe seemed to affirm his drinking confession.  Clearly, there was great affection amongst the cast as they ribbed each other and leaned in to confer with each other during the game.

Another laughing moment was when Caitriona was asked if Tobias was as mean as his character Black Jack between filming scenes and she hastened to reassure that he was usually quiet between takes and an idiot the rest of the time.  From the broad grins on both Caitriona and Tobias’ faces, this was perhaps a bit of an in-joke between them and it was fun that they were sharing a bit of it with the fans.

A more head-scratching moment was when author Diana Gabaldon described Sam Heughan as “grotesque” and then hastened to explain that the actual definition of the world meant “unusual looking.”  Sam seemed quite amused and mockingly pretended to be perturbed at her literary description of him.  The fans did not by that for one second as they roared with approval over Sam’s clean-shaven (if not heart-stopping) appearance as he sat before him.  Diana also gave credit to both Sam and Tobias for their courageous performances in the upcoming episodes of OUTLANDER, in which both their characters suffer greatly.  Sam described the increasingly intertwined and complex relationship between Claire, Black Jack and Jamie as strange, interesting and satisfying as the show picks up and propels all three characters through the remained of the season.  Fans of the books know exactly what dark storyline they were hinting at and Ron Moore confirmed that both Season 1 and Season 2 of the show are doing their best to follow the stories as written in Diana’s books.  The show has worked hard to be a faithful adaption, with expansion of some of the supporting character storylines and adding more of Frank’s journey to help flesh out the worlds that the characters live in.  Diana also said she was pleased out how the show has used the characters and stories that she wrote and found such creative ways to bring them to life on screen. The show does not always put the scenes in the same order or use the exact same dialogue as written in the book, but Diana loves what the show has created from her books.  She did reveal that the one time she insisted that the show be the same as in the book was the scene by the fire between Jamie and Claire where he told her: “You won’t be scared as long as I’m with you,” and Ron had obligingly added that back in for her.

So as the show picks up momentum in the back half of Season 1, there will be a lot more to the stories and interactions of Claire, Jamie and Black Jack — but, unfortunately, Claire’s husband Frank will not be seen again this season, though Tobias assured that Frank returns in Season 2, which starts filming in April.

Interestingly enough, when asked what other character they would like to be for a day on the show, all three of the leads unhesitatingly said Black Jack.  Of course, Tobias already plays Black Jack, but apparently, his two co-stars Sam and Caitriona would also love the chance to play the diabolical villain for a day.  Tobias credited the strong writing and costuming in helping him channel the character of Black Jack so acutely on screen.  As viewers and fans have already seen, Tobias is startling as he portrays the two characters Frank and Black Jack with such ease and yet profound differences.  It is hard to say whether Tobias was joking she  said he is happy he had not read the books before accepting the two roles, as Black Jack’s darker storylines surely would have given him pause.  He just recalled that Ron had told him that OUTLANDER was interested in exploring what was the same about Frank and Black Jack, as well as what was different about them.  That idea really appealed to him.

One last fun moment from the panel was when asked if star Sam Heughan had a “butt-double” for his scenes on the show, to which Ron Moore admitted that some of that is the magic of CGI, but as Caitriona was broadly grinning and nodding “yes,” it makes one think that perhaps the show does use someone for the more revealing scenes.  That is part of the Hollywood mystery: just how much of what you see on the screen is real and how much is all due to movie-magic?  Yet, given the perfectly athletic and fit appearance of Sam Heughan right before their eyes, it is doubtful that fans believe much movie-magic is necessary for his scenes.

During the red carpet interviews with press, stars Caitriona Balfe, Sam Heughan, Tobias Menzies, along with Ron Moore and Diana Gabaldon took a few minutes to happily chat about the show and teased a few things coming up when the show returns:

Ron Moore expressed his happiness that the show has been so warmly received and assured that the upcoming episodes are not only accelerated in pace, but have more twists and turns and ends up at a dark and harrowing place by the season finale.

Diana Gabaldon gave shout-outs to the characters of Rupert and Anghus as being her favorite expanded characters on the show.  She loves the “Laurel and Hardy” comedy of the two.

Tobias Menzies defended Black Jack as not being insane, but as rather being rationale in what Black Jack does, though he admitted the character gets a lot darker with the nasty stuff ahead.  He also said that he really admired Black Jack’s honesty — as Black Jack is who he truly is and said, “You may not like him, but he’s real.”

Then co-stars Caitriona Balfe and Sam Heughan offered their perspectives on what lies ahead for Claire and Jamie.  Caitriona  said that the honeymoon is indeed over and there is a lot of trials and tribulations ahead as outside forces affect their relationship. Plus, Jamie and Claire find out that they are two people from different centuries and a lot of tension is created from that.  But she hastened to reassure that Jamie and Claire will struggle to stay together in the midst to it.  She also said she loves how Jamie is shown to be Claire’s rescuer quite a bit, but by the end of the season, Claire flips it and Claire gets to be the strong one for him.  Sam had a more romantic viewpoint and said that while the honeymoon phase may be over, the romance is just starting and that the Jamie/Claire relationship certainly gets more interesting.  They find out if they actually want to stay in the marriage and discover that they have to fight for it.  But, ultimately at the end of the day, Jamie and Claire love each other and need each other.

Whether Jamie and Claire can actually fight all the external forces trying to pull them apart, as well as fend off Black Jack and his thirst to destroy them both, shall be seen as OUTLANDER returns with eight new episodes starting Saturday, April 4th on Starz.