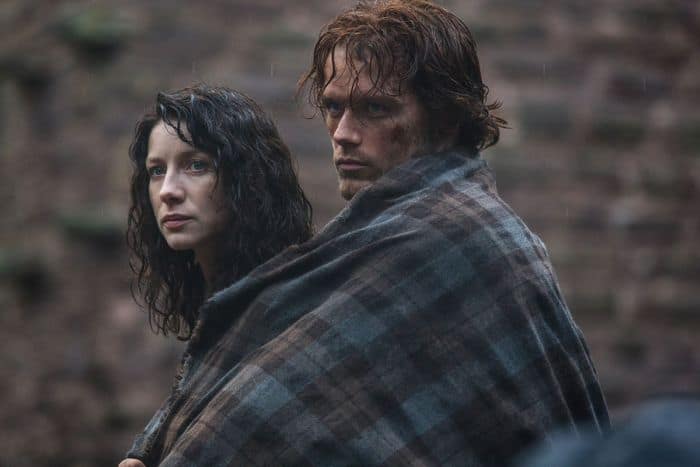 The latest drama from Starz is OUTLANDER, premiering this weekend, although the first episode has already been released publicly online. The series revolves around a British nurse named Claire Randall (Caitriona Balfe, Now You See Me), who, while traveling the Scotish highlands with her just-returned-from-World-War-II-husband, Frank (Tobias Menzies, Game of Thrones), is tossed back in time two hundred years. Lost and out of her depth, she is quickly taken under the wing of Jamie Fraser (Sam Heughan, Doctors).

While there are elements of time travel in the story, obviously, OUTLANDER is much more a romance than science fiction program. The primary dramatic thrust involves Claire’s heart, which fully belongs to her husband, Frank. But now she is far away from Frank with no way back in sight, so her affections might be tested, especially when a charming man looks out for her. It’s essentially the familiar love triangle, but with one party, who starts with the upper hand, sitting on the bench for most of the game.

The love story between husband and wife is well woven in the first episode, “Sassenach,” which spends much of its running time in 1945, before moving back to the 1740s. As such, it’s hard to get a feel for what exactly the show will be. That seems OK because Claire is definitely the center of the tale and her character is well-served in the pilot. Any other feelings that might bubble up are sure to be gradual, and thus, audiences won’t have to worry about getting whiplash from a fickle player.

In fact, all of OUTLANDER moves very slowly. The first hour-plus is simply concerned with Frank getting home, the couple reconnecting, and then Claire being separated again from her love. While some series could have shown that in an opening scene or act, OUTLANDER takes a full installment to do so. That will likely give us some idea of the type of pacing to expect from the show, going forward, which is glacial.

Yet, OUTLANDER somehow avoids being boring. There is an ineffable, magnetic quality about Claire that makes her easy to watch. Her happiness is the viewer’s happiness, and her troubles concern us. Claire is easy to care about, and sucks us into the story thoroughly. While this is not the type of genre of television I’d normally be attracted to, a period romance, I found myself engrossed in Claire’s journey, both emotional and physical, and I definitely want to find out what happens to her next.

What I like most is that there are many little, unexpected, charming bits. One such instance involves the lady that runs a bed and breakfast that Claire and Frank stay at. She frowns upon hearing their energetic use of the bed, making us think she’s a prude. But when Claire and Frank stop goofing around and the creaking switches to something more realistic, she smiles, dashing assumptions. There’s also an amusing scene in which Claire is, more or less, labeled a nymphomaniac, spun in a positive light. These sorts of things provide the light touch that keeps the show from getting too melodramatic.

The setting is also beautiful. Who doesn’t want to spend time in the Highlands of Scotland? It’s a lush, green place that feels magical and old at its core. It’s the perfect setting for a time-bending adventure, especially one with such romantic notions.

The one complaint I have about OUTLANDER so far is that Menzies has been tasked with a dual role, also playing Frank’s ancestor, Black Jack Randall, in the 1740s. While some people do resemble their forefathers to some extent, being identical to someone many generations removed is exceedingly rare. I feel like TV shows make the mistake of allowing one actor to stand in for multiple family members too often, and it comes across as unrealistic and hokey. In a show that takes such care with authenticity otherwise, this is a disappointment.

Still, that’s a minor complaint about a series I really enjoy. OUTLANDER premieres Saturday at 9 p.m. ET on Starz.