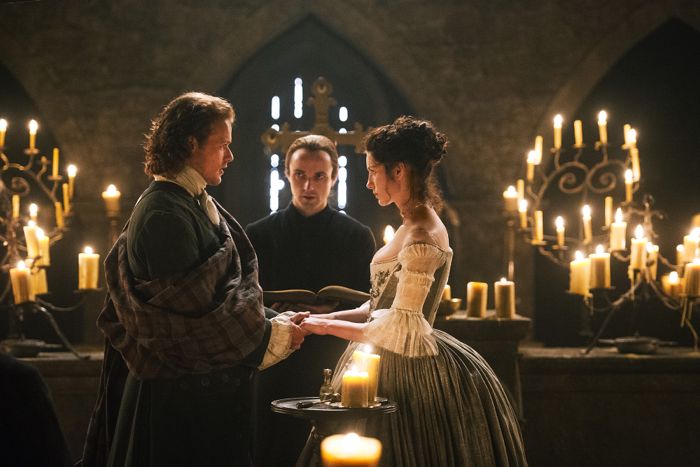 This week’s installment of Starz’s OUTLANDER is called “The Wedding.” It begins with a parallel look at both of Claire’s (Caitriona Balfe) big days – a courthouse quickie with Frank (Tobias Menzies), and a more traditional ceremony involving Jamie (Sam Heughen). But the majority of the hour is focused on what comes immediately after the wedding, and being that the audience of OUTLANDER is made up of adults, I think we all know what that means. I’m talking about S-E-X.

Claire doesn’t fall into bed with Jamie immediately. This all happens quite quickly, and she’s still wrestling with the notion that she’s cheating on Frank. He may not be alive in this time, but he very much exists in the era Claire belongs to. Her goal is to get back to him. She doesn’t want to be spoiled when she does so, and she sees wedding Jamie as making her a bigamist.

It’s a shame Claire feels this way. Jamie is extremely earnest and sincere. Through flashback, Jamie tells Claire of the trouble he went to in arranging the perfect ceremony. Claire admits to drinking heavily in the hours leading up to the marriage. This is not a perfectly balanced couple, the affection being given in a very one-sided fashion. He gifts Claire his mother’s cherished pearls, and she gives him nothing, not even giving up Frank’s ring. Jamie is a good man and he doesn’t deserve a spouse who is not fully committed to him.

Yet, is Claire’s hesitation really her fault? She definitely cares for Jamie, and she enjoys their three love-making sessions in “The Wedding.” If she didn’t marry Frank, she’d be free to love Jamie, and it’s easy to imagine her doing so with all her heart. Her hesitance is not about Jamie himself. A night of talking and being together (and imbibing even more alcohol) is plenty enough to lower her defenses and allow her to give in to the feelings she harbors. It’s just a crappy situation.

The reason Claire goes through with “The Wedding” is to protect herself from Black Jack Randall (also Menzies), who is determined to learn her secrets, even through violent means, if necessary. Claire marries Jamie for protection, and he willingly steps forward to offer a safe haven. This does demonstrate some level of love between them, whether it’s fully sexual or not, and the wedding has to happen.

All of this begs the question, who will Claire choose: Frank and Jamie? If she has the opportunity to return to her time, will she? “The Wedding” certainly seems to indicate so. Even after coupling with Jamie, she still refuses to let go of Frank’s ring. Her gaze at both hands bearing a band does show a bit of conflict, but all of Claire’s actions in OUTLANDER point to her going back to Frank. This will mean abandoning Jamie and hurting him deeply.

Might there be a time when Claire’s allegiances shift? Will she stay in the past long enough to get to a point where she values Jamie ahead of Frank? I haven’t read the books, so have no prior knowledge of what’s to come. But it seems to me that, given time, she might not want to go home so desperately, though that time is not now.

Marrying Jamie does make Claire more valuable and accepted by the other Scots. We see several of them make efforts to prove their loyalty to her, and while they may be acting because of what Jamie means to them, it’s clear this community now extends to Claire as well. Nothing else she has done up to this point will ingrain her in with the MacKenzies as much as marrying Jamie does.

Dougal (Graham McTavish) remains the enigma, though. He seems sort of happy for the bride and groom, offering Jamie uncle-ly advice. But he makes a serious pass at Claire later. The drunken assault a few weeks ago is clearly not a one-time thing, and Dougal harbors some sort of attraction towards Claire. Since Claire keeps shutting down his advances, will he give up, or will he go to a darker place to get what he wants, which seems to be Claire’s body?

Fans of the romance element of OUTLANDER, and it’s a major part of the show, will surely love “The Wedding” because there is lots of sex and some real intimacy between Jamie and Claire. Fans of character development should also be happy with this entry. People who watch for the action or the time travel might be disappointed, but those are lesser things as far as OUTLANDER is concerned, so this week serves the majority of the viewership pretty well.

Only one episode left before the hiatus! OUTLANDER’s mid-season finale airs next Saturday at 9 p.m. ET on Starz.