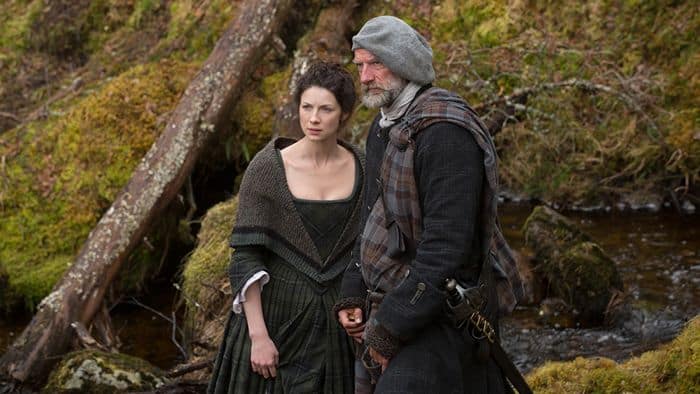 In this week’s installment of Starz’s OUTLANDER, Claire (Caitriona Balfe) sets out on the road with the clansmen, intent on using her time away from the keep as an opportunity to escape. That is, until she pays attention to these folk and learns more about then. Similarly, my first instinct is to dismiss “Rent” as a slow hour that doesn’t get to much, but the more I consider the events, the more I realize the importance of revealing politics, history, and the implications of time travel.

In the first part of “Rent,” Claire witnesses the payment of taxes as expected, but then sees Dougal (Graham McTavish) collect more coin the evening after, leading her to suspect he is skimming money for his own greedy purposes. Dougal seems content to let this impression stand. However, the more Claire hears, even in the nearly-incomprehensible Gaelic, the more she realizes that Dougal’s motivations are not selfish at all, but a collection to fund just rebellion. The Scots want to restore who they see as the rightful heir to the throne.

The way “Rent” plays this out is very interesting. Like Claire, we don’t understand Dougal’s words, as the Gaelic in OUTLANDER is not subtitled. The show is told through her point of view and we must rely on her conclusions, even if they don’t line up to reality. The show has us thinking ill of Dougal and the others until Claire discerns the truth, and like her, our minds are immediately flipped by the greater understanding.

What is the writer’s purpose in doing this? Is it to point out how often preconceived notions are wrong? Is it just a clever storytelling device? Or is it the way to brilliant craft a compelling hour of television so that viewers are not only drawn into the tale, but learn something about the world and themselves through it? Most likely, it is a combination of all these things.

Dougal and Claire’s new friend, a lawyer who counts the money, are content to let Claire believe they are criminals because they are more afraid of what she will do if she knows the truth. They don’t want her to think they are treasonous against the ruling monarch, just in case she should be re-united with the Red Coats and tell on them. This makes sense, allowing her to misinterpret, even if it casts them in a bad light, to protect themselves.

That’s a sign that they don’t trust her. Why should they? She came into their midst, a foreigner who often doesn’t see eye-to-eye, and they don’t accept her as part of their group. Yet, over the course of “Rent,” this begins to change. Once Claire sees their true intentions and respects them for it, they respect her. The clansmen fight for her honor, whether they believe in her or not, and she is able to join in their risqué jokes.

Which brings us to the climax of “Rent.” The English soldiers come for Claire, knowing she may very well be being held against her will by the Scottish clan. The episode ends without revealing whether or not Claire will stick up for Dougal et al, but I think it’s pretty obvious that she will, even if she has to lie about whether or not she’s a prisoner. After all, by now she understands them and is growing fond, even perhaps of jerky Angus (Stephen Walters). Surely she would not say anything to risk any of their lives?

We see Claire try to protect the clan this week as she talks to her new pal about the rebellion they are collecting for. She knows it’s doomed to fail and fears for their lives, but voicing her suspicions just make them all more wary of her. They don’t know that they’re on the losing side, so they see her warnings as threats or an attempt to undermine their determination. Claire wants to help, but it isn’t seen that way.

This is one of the inherent problems with time travel. Even should Claire seek to preserve the past, something many a person may do when finding themselves back in time, she really has no sway. Her motivations seem more to save lives than worry about the time stream, which makes sense, given her character. But there’s no good way for her to prevent ill from befalling them. Unless she could get them to believe she came from the future, a seemingly impossibility that she wisely doesn’t even attempt, she can do nothing to stop their coming demise.

The one person Claire may be able to confide in is Jamie (Sam Heughan). They grow closer this week when he sleeps outside her door to protect her. He’s far too gentlemanly to come inside, even when she offers, but the charge between them is obvious. They are definitely destined to be a couple, though there’s no rush on that, since Claire is still very much in love with her husband, Frank (Tobias Menzies), even though he won’t be born for nearly two centuries. Still, the seeds are more than planted and we see it growing here. And Jamie will probably believe Claire when she inevitably gives him her entire narrative.

“Rent” uses Frank sparingly, with just a couple of key flashbacks (flashforwards?). I still think OUTLANDER would be better without including Claire’s time in the 1930s and ‘40s, as the story could be told without it. However, at least this episode doesn’t make these too large a part of the proceedings, only using them to emphasize a few points.

Overall, “Rent” gives us a lot to think about, and thus is a worthy entry for a series that is fast becoming a favorite of mine. While it may start slow, the second half ramps up its importance, and the hour ends up being a pivotal one in the season-long arcs. The cliffhanger ending makes me wish we didn’t have to wait seven days to find out what happens, but at least tonight’s viewing is quite satisfying.