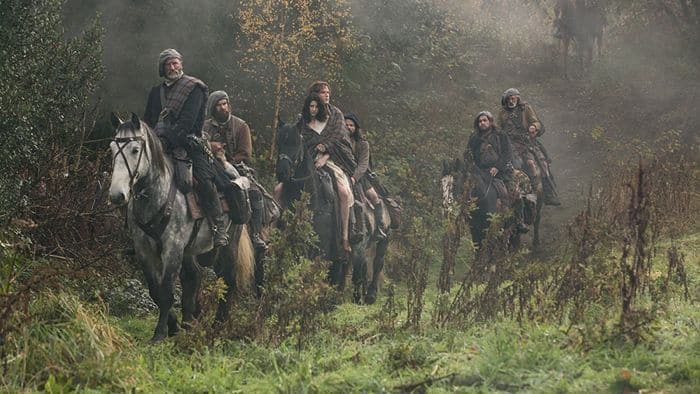 Episode two of Starz’s original series OUTLANDER is likely a truer indicator of what this show will be than the first hour, which was mainly set in the 1940s. Claire (Caitriona Balfe) is slowly adjusting to Scotland in the 1740s, but wants to escape the clan that has her so she can look for a way home. Arriving at “Castle Leoch,” the seat of the clan the show present, as well as this installment’s title, Claire finds new friends, foes, and a realization that getting home may be even harder than she expects.

OUTLANDER does a good job setting up the principal cast in “Castle Leoch.” Most importantly, we’re introduced to Jamie’s (Sam Heughan) uncles, Colum MacKenzie (Gary Lewis, Gangs of New York) and Dougal MacKenzie (Graham McTavish, The Hobbit movies). Colum is the leader of the castle, but his younger brother, Dougal, is the muscle. It’s not an unfamiliar arrangement, but it does leave the show unpredictable. Would Dougal ever go around his sibling? Will Colum die from the debilitating condition from which he suffers, leaving Dougal in charge? Can Claire count on either one for assistance?

It’s clear in “Castle Leoch” that while Colum is not cruel, he is fiercely protective of those under his charge. He seems a friend to Claire at first, but surreptitiously interrogates her, even after she thinks the questioning is done. Claire isn’t dumb, but she also isn’t used to not being able to take people at face value, still adjusting to these more dangerous times, and slips up, making her untrustworthy. The result is that she is kept at “Castle Leoch” against her will until such time that she can earn Colum’s faith in her. Though, as mentioned above, that might not even be enough, should Dougal rise to power.

This complex dynamic is one in which neither Claire nor Colum is a villain. The viewer may side with Claire, of course, as she is our protagonist we’ve been instructed to root for. Yet, Colum seems fair, and though his suspicions will surely ultimately prove to be unfounded, they are understandable at the present, especially given Claire’s English accent, a people the Scots are not in league with exactly. It’s an uneasy truce between the two, with Colum not quite imprisoning her, but neither is Claire free to leave.

Others in the clan are much easier to win over. Jamie, of course, is for Claire, and as she tends his wounds, they bond even more as he shares his tragic, noble history. Claire finds the closest thing there is to a peer here in Geillis Duncan (Lotte Verbeek, The Borgias), whose knowledge of plants and herbs have some viewing her as a witch, though Claire is scientific-minded enough to know better. And there’s goodly, motherly Mrs. Fitzgibbons (Annette Badland, The Sparticle Mystery), whose disapproval over Claire’s risqué (for the time) clothing is soon replaced by affection.

More a mystery is the only main character I haven’t yet mentioned in OUTLANDER, Murtagh Fitzgibbons (Duncan Lacroix, Wikings). Murtagh is seemingly pleasant and married to Mrs. Fitz, which earns him some respect. But he serves as the eyes of Dougal, too, which seems a dubious task. It’s not clear yet if Murtagh is in this position willingly or out of a sense of duty. Can Claire trust him?

The other thing “Castle Leoch” has me wondering is how Claire’s glimpse of Black Jack Randall (Tobias Menzies) is affecting her impression of her husband, Frank (also Menzies). Hearing from Jamie about Black Jack’s brutality, it has to be shocking for Claire to think that this is her love’s forbearer, and that these deeds are in his blood. She has to wonder if Frank acted anything like Black Jack when thrust into war himself. The physical similarity, which I am not in favor of as an element of the show, also has to make it even easier for her to draw a parallel. Might this be why she starts to tell people Frank is dead, acting more like a widow than a married women?

I like this episode of OUTLANDER a lot. It provides much insight into the chemistry between the various characters and paints a very authentic-seeming portrait of a clan in Scotland at the time. It provides historical context while staying engaging with interesting, complex characters. The Gaelic language comes in bursts, and while at first I didn’t like the fact that it isn’t subtitled, I can see how that helps the viewer put themselves in Claire’s situation even more, as she must rely on a kindly interpreter. Flashes of the twentieth century and Jamie’s past are used sparingly and effectively, thankfully, as some shows overuse this device. And, as I mentioned in my pilot review, OUTLANDER is in a simply gorgeous setting that only enhances the style and tone.

My only real complaint about “Castle Leoch” is that Claire seems to be getting over Frank much too fast. She does want to go home, that is true, and she has to adjust somehow in order to cope with her current existence. But her draw to Jamie is strong, and while she is fighting it, it’s a battle she’s losing far too quickly. Is Frank not the man she thought he was, given what she now knows about his lineage, and is Jamie her true man? Only time will tell.