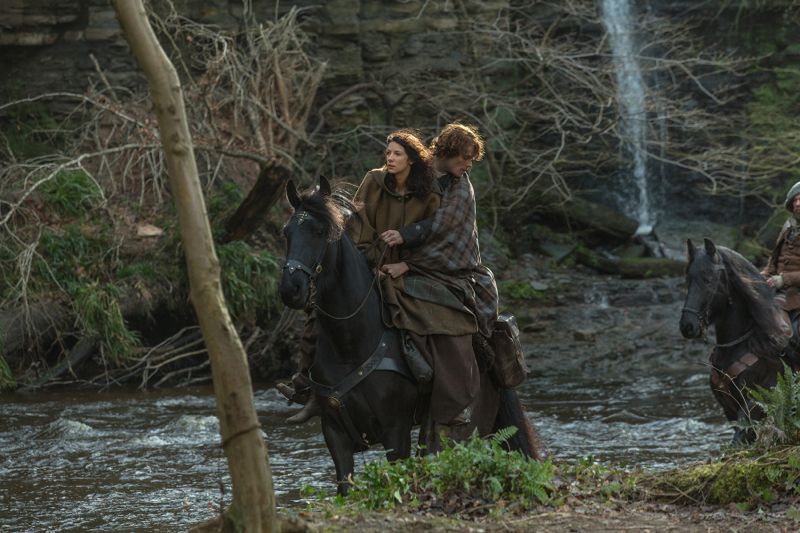 “The Reckoning” picks up pretty much right where Starz’s OUTLANDER left off in its midseason finale last fall. Claire (Caitriona Balfe) is in the custody of one Black Jack Randall (Tobias Menzies), about to be raped. The episode, which is narrated by Jamie (Sam Heughan) for a change, begins with his daring rescue of his wife, which of course must happen. But Black Jack trying to rape Claire and make Jamie watch is actually arguably not the most disturbing thing in the hour.

Yes, that scene is absolutely awful. Black Jack is a truly twisted individual, a cold-blooded exhibitionist and sadist who would kill Jamie while taking Claire against her will and probably take extreme pleasure from it. But we expect that from Black Jack. We know he’s a bad dude, and no one would think he’d do anything more civil than this.

No, “Reckoning” takes the aftereffects of this event and continues to make us uncomfortable with them. Claire and Jamie’s reconciliation is easy enough. There’s an ugly screaming match, but as soon as she realizes that his anger comes from a place of fear for her safety, she can forgive him. He’s a noble man who just wants to protect his wife, and she can understand that, as she is surely scared, too. The fight is emotionally raw and moving, and concludes with mutual forgiveness.

That doesn’t satisfy the clan, however, who are not her husband and are also put in danger. In modern times, a heartfelt apology and some fresh baked goods might be enough to get Claire back into their good graces, but that is not the way of the MacKenzie clan of past centuries. Instead, Jamie takes Claire upstairs and beats her bare bottom with a belt as punishment for her recklessness.

I find this scene even more disturbing than what Black Jack does. Not because of the clan’s reaction, which seems in character for those rough and tumble men, but for Jamie’s. He doesn’t offer Claire an out; he doesn’t try to keep her from harm. He thinks he’s doing her a favor, fighting her physically to be able to inflict the lashes, and enjoying her squirming in pain. This is 50 Shades, but without the sub agreeing to it.

I know I am judging Jamie through modern eyes, and I can’t help that. Because Jamie is so loving towards Claire, I forget he is part of that larger group and expect him to be better than them. It’s Claire’s resistance and anger, more than anything, that ruin this scene for me, and Claire seems perfectly justified in freezing Jamie out until he promises to never do it again, even threatening him with a knife during sex to even the score. Now, Jamie will be the man that Claire, I, and other fans want him to be, but he must be punished to get there, which has a certain sort of poetic justice, even if his chastisement is emotional, rather than physical.

“Reckoning” may understand what it’s doing to Jamie, and thus gives him a more respectable plot as well. Colum (Gary Lewis) is furious with Dougal (Graham McTavish) for collecting money for the Jacobites and confiscates the funds. The clan almost splits into civil war, with various members siding with one brother or the other. Jamie intervenes, though, and brokers peace as only an outsider can. This proves his worth to Colum, even if he won’t swear fealty, and shows Jamie’s level headedness that many of the Highlanders lack.

Lastly, Jamie gets a very cold welcome at the castle from Laoghaire (Nell Hudson). She has flirtation with him before he leaves and he returns a married man, so she has plenty of reason to be upset. However, she handles it poorly, offering herself up as a fling in the woods and planting bad totems in the couple’s bedroom. Thankfully, Jamie resists, though he does appear tempted by her charms, as many men would be. I’ve heard Scottish women have a temper and can be vindictive (a stereotype I know that does not apply to all of the group), but Laoghaire takes this to a terrible level. She isn’t going to accept the union anytime soon, which makes her a danger to Claire in the meantime. Let’s hope she doesn’t step up her stunts to the level of violence against our heroine.

Despite the scene I spend a great deal of this review discussing, or maybe even because of it, I do think “Reckoning” is a strong return for OUTLANDER. It gets us back to the characters, tells an unexpected, engaging story, and maintains the complex, beautiful tale told over the first eight episodes. I’m greatly enjoying the show, and think it has stayed true to form during its break.