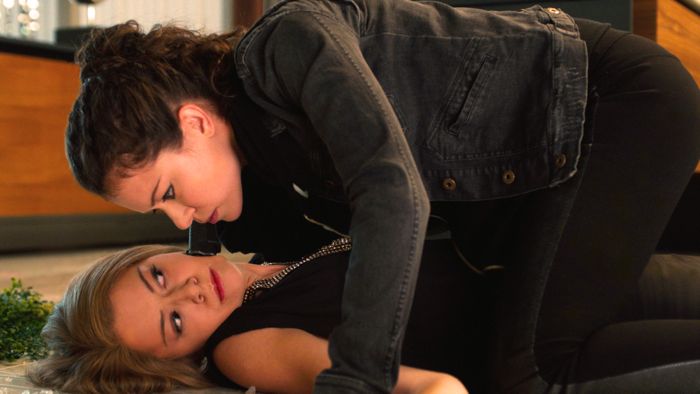 BBC America’s excellent ORPHAN BLACK returned for a second season last night. While the premiere episode, “Nature Under Constraint and Vexed,” is not a good installment for someone who hasn’t ever seen the show to jump in on, that’s part of why it is oh-so-good for the fans. The story picks up pretty much right where the first year leaves off, and hits the ground running from there.

Sarah (Tatiana Maslany), arguably the main character, is in a Matrix-esque environment. She is on the run, nowhere safe for her to go, with Daniel (Matthew Bennet) and his goons, who wear suits and dark sunglasses, on her tail. She isn’t sure who she can trust, reaching out to Paul (Dylan Bruce) even though he works for the enemy, and she doesn’t have a clue how to get her family back.

This isn’t much of an improvement over Sarah’s situation last year. She has gone from grifter barely scraping by to grifter barely scraping by with her loved ones in danger. The only advantage she has now is that there are actually a handful of people who might be of assistance, though none is as invested in the trouble as she is, and it’s always going to be especially hard for her, with her trust issues, to sort out who can be relied upon.

Alison (also Maslany) is playing by the rules Dyad, the sinister company Sarah is fleeing from, has set out for her. This means she is free to go about her life and is not closely monitored, which allows her opportunity to sneak around and help Sarah. Alison has no desire to paint a target on herself by publicly declaring war and threatening her suburban existence, but at the same time, she isn’t going to turn her back on a clone in need.

Cosima (Maslany again) straddles the line between the two. She still resists working for Dr. Leekie (Matt Frewer), despite his efforts to persuade her to change her mind, which leaves her hiding out. She is more willing to assist Sarah, but also not ready to rush in guns blazing. These clones may share a bond, but they are definitely not the same people.

Once more, the main draw of ORPHAN BLACK is the incredible talent of its lead actress in her multiple roles. Maslany differentiates each of the three listed above, plus calculating Rachel and crazy Helena (who, thank goodness, is still alive!), with what looks like ease. It’s interesting to study how even the default resting face of each woman is completely different. The changes, major and minor, are so complete that Sarah, Alison, and Cosima really do seem like distinct individuals, barely connected.

Even better, “Nature Under Constraint and Vexed” gives us one of the golden scenes where one of Maslany’s character pretends to be another one. As Sarah sneaks into the Dyad party masquerading as Cosima, Maslany creates something entirely new, Sarah’s version of who Cosima is, which is really startling in its complexity and authenticity.

Of course, ORPHAN BLACK does have an excellent plot, too, filled with a variety of players who may or may not be on our heroines’ sides. Does Art (Kevin Hanchard) really want to help Sarah, or is he playing a classic good cop / bad cop sting with Angela (Inga Cadranel)? Is Paul offering assistance, or only feigning such to do Rachel’s bidding? Is Delphine’s (Evelyne Brochu) act of handing over Cosima’s blood to Leekie an act of betrayal, or is Delphine just worried about her lover’s life?

Basically, ORPHAN BLACK has some of the best acting on TV mixed with a compelling tale of shifting allegiances and surreptitious organizations. Dyad isn’t the only threat in “Nature Under Constraint and Vexed,” and we still have the mystery of the clones’ origin to solve to boot. Where the show will go next is anyone’s guess, but it’s a thrilling ride and I’m happy to be along for it.