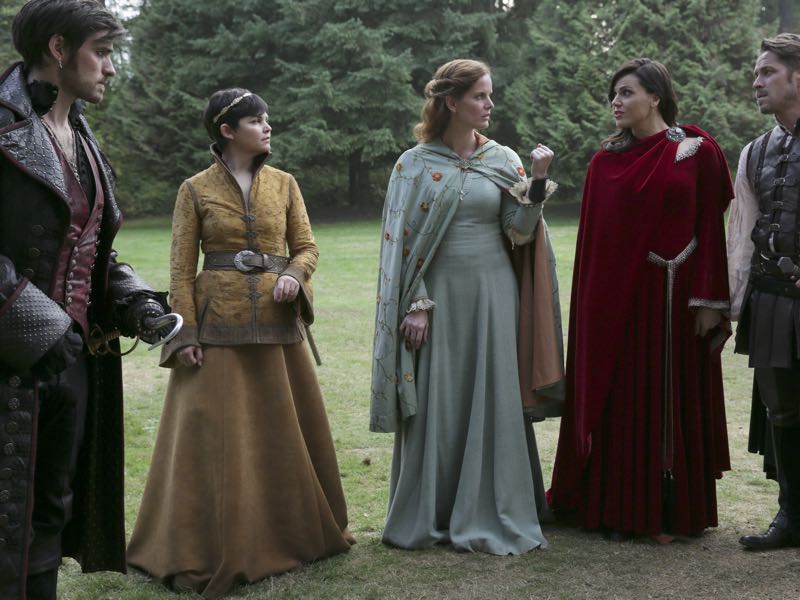 Darkness and Light. One conceals; the other reveals, but each is infinitely seductive. Prepare for the ultimate battle between these opposing, unpredictable forces in ABC’s Once Upon a Time: The Complete Fifth Season.

When the Savior becomes the “Dark Swan,” the lines between good and evil blur as Emma begins to relish the intoxicating taste of absolute power. Terrified she’ll succumb, Emma and Hook visit Camelot to find the one person who may be able to aid them: Merlin. Unfortunately, King Arthur proves treacherous, and when he joins forces with a vengeful Zelena, Emma and Hook’s hopes are shattered. Now Emma and her entire Storybrooke family must embark on a chilling descent to the Underworld of Hades, where they’ll try and rescue Hook from eternal damnation…with “help” from Rumplestiltskin. But will any of them survive the journey?

Treat yourself to all 23 riveting episodes of Season 5. Plus, indulge your senses with never-before-seen bonus features as you share the romance, relive the magic and unlock the secrets of Once Upon a Time.

MERIDA IN STORYBROOKE – In Pixar’s “Brave” Merida proves her strength and independence to the world and she makes no exceptions when she comes to life in “Once Upon A Time.” We’ll explore Merida’s journey further by going behind the scenes and meeting Amy Manson, the Scottish actress who perfectly personifies an independent spirit. Amy will take us through her process for stepping into the role and share with us the similarities between her character and herself as a young girl growing up in Scotland. We will explore the explosive mash‐up of Merida, Mulan and Ruby and find out why they are perfectly suited to helping each other through some tough times. Learn why Merida is the perfect feisty fit for the Fairy Tale world as well as why they chose to match her with these particularly strong women.

TALES FROM THE UNDERWORLD: A KNIGHT WITH CRUELLA – Set in the Underworld and featuring Cruella and an all-new ONCE character portrayed by a special, surprise actor (“Buffy’s” James Marsters). Cruella has been left behind in the Underworld at the end of the season, and we didn’t exactly learn her fate… until now.

THE FAIREST BLOOPERS OF THEM ALL

ONCE CELEBRATES ONE HUNDRED